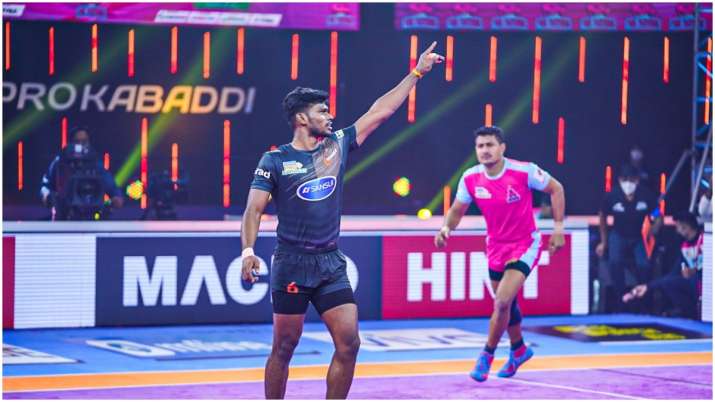 Delivering a spectacular performance, the U Mumba shined through yesterday’s match with its young duo of Ajith Kumar and Abhishek SinghThey played collaboratively and helped U Mumba register a massive 37-28 win against the Jaipur Pink Panthers. The man of the match, Arjun Deshwal, scored another Super 10, his fourth Super 10 in PKL, and he finished the match with 14 points in total.

U Mumba won the toss, and Arjun Deshwal from Pink Panthers started raiding first. Deshwal debuts one point for the Panthers while scoring another bonus point. U Mumba recovered quickly with a super raid, scoring three points by Ajith. At 7:45 PM, U Mumba managed another successful super tackle. They deliver a massive setback to Pink Panthers with an All-Out. Further, U Mumba maintains a stable lead with a perfect dive by Vishal. At 7: 56 PM, Abhishek Singh for U Mumba gave the team a big lead, scoring 3 points. U Mumba leads the match with 12 points by the end of the first half, while the score margin stays at 25-13.

The second half starts with a stable defence, not allowing the other to score any point with ease. The Pink Panthers tried to score more points, but the U Mumba were all set to stop them with a fantastic defence strategy.

While Deshwal continued to add points, the Pink Panthers found it challenging to stop U Mumba’s raider. Ajith and Abhishek’s excellent partnership shined throughout the second half of the game. Both of them continued to pick points so that U Mumba could maintain the double-digit lead. Finally, U Mumba managed to send Deshwal back with a bullish tackle. Soon skipper Deepak Hooda lost the game for the Pink Panthers with just two players left on the mat. U Mumba won the game with nine points, while the final score was 37-28.