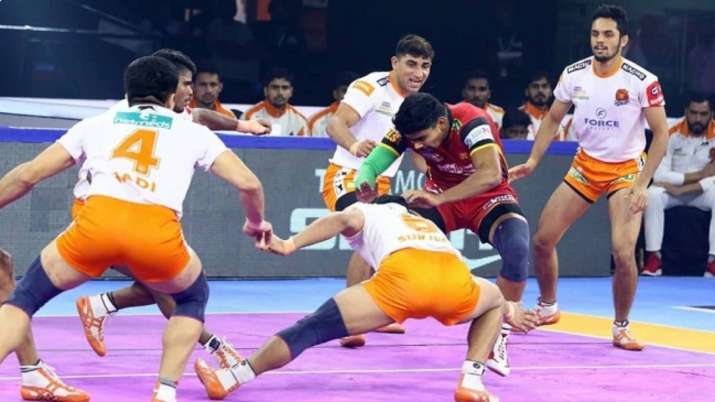 2021’s last weekend is soon to come, yet Vivo Pro Kabaddi is bringing the party to us with so many enticing fixtures. Vivo PKL’s oldest rivals Bengaluru Bulls and Haryana Steelers, are all set to face each other in the coming match!

Arjun Deshwal and Jaipur Pink Panthers are preparing to face Fazel Atrachali and U Mumba. While the Haryana Steelers want to take on the Bengaluru Bulls and Pawan Sehrawat in the second game.

Jaipur Pink Panthers have remained unbeaten since they lost the season-opening game against the Gujarat Giants. They have got two straight wins afterwards. Raider Arjun Deshwal has been incredible who has registered a Super 10 in each game played alongside Naveen Kumar this season. So, Arjun Deshwal aims to get another Super 10 against U Mumba in Match 21.

U Mumba has experienced mixed fortunes this PFL season. They have won, lost, and tied the last game in the three opening matches. If they can win over the Pink Panthers this Thursday, they will momentarily get the second position on the points table. Point to note, Fazel Atrachali hasn’t scored big this season but is eager to deliver his best performance in Match 21.

Pink Panthers and U Mumba have faced each other 17 times in total in vivo PKL. U Mumba holds a 9-6 lead with two games finished with a tie.

The Haryana Steelers snapped a two-game losing streak over the Telugu Titans. All-rounder Meetu has been the star of the match for the Steelers, who finished the night amazingly with 12 points. Rohit Gulia (scoring 8 points) and veteran Surender Nada (scoring 3 points) supported Rookie Meetu. Haryana Steelers plan to climb up the league standings with another win on Match 22.

Even though U Mumba lost their opening game, the team is ready for a strong comeback. Pawan Sehrawat has been showing a stable and dedicated performance for his team. He is eager to give15-points performance against the Steelers. The last time the Bulls faced the Steelers, the Bulls set a new Vivo PKL record with a massive 39 points. So, can we expect another big performance from the Bulls?

The Steelers and the Bulls have played against each other four times in vivo PKL, and each of them has won two games.

Watch Match 21 (Jaipur Pink Panthers vs U Mumba) at 7:30 PM IST, and Match 22 (Haryana Steelers vs Bengaluru Bulls) at 8:30 PM IST LIVE on the Star Sports Network or Disney+Hotstar.