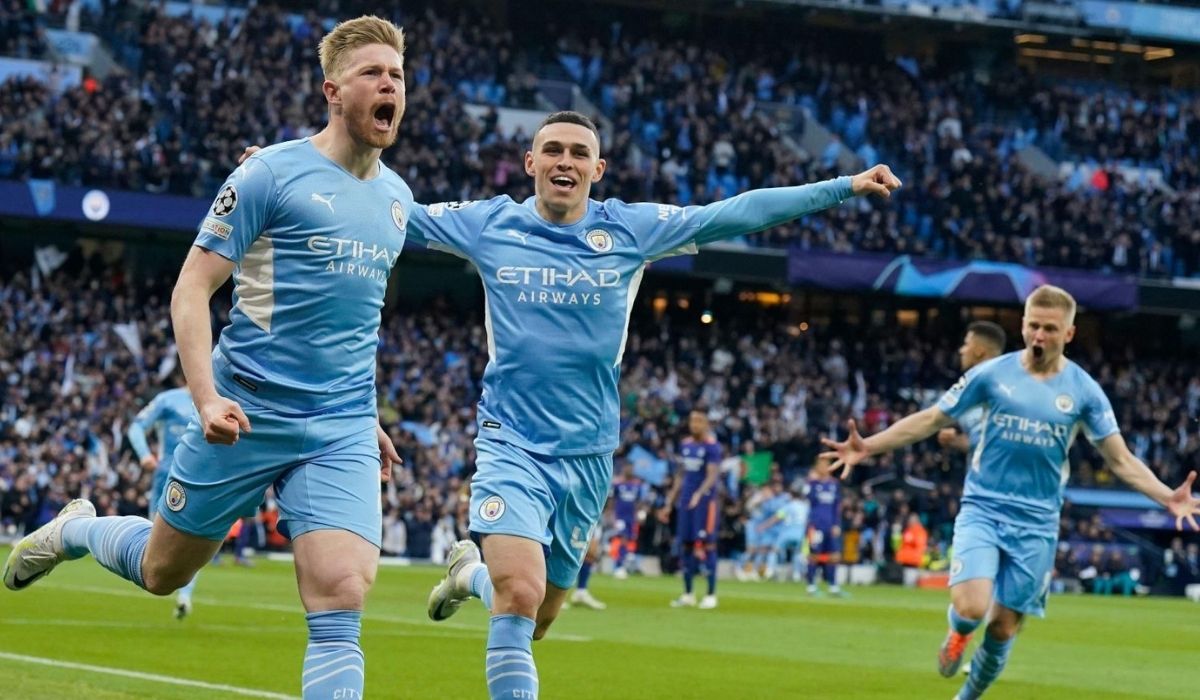 The first semi-final fixture of the 2021/22 Champions League delivered everything one hoped for. Pep Guardiola’s masterclass became a problem for Carlo Ancelotti as Real Madrid were outshined by Manchester City throughout the game. However, a few moments of brilliance from the visitors along with a letdown from the hosts has kept the match very much alive. Manchester City may have a slender advantage as they won 4-3 at the Etihad Stadium. But the second leg at Santiago Bernabeu is going to be much more entertaining.

Manchester City did not waste time at all as they took a shocking lead from a great start. It took them only 92 seconds to break the deadlock. Riyad Mahrez put his skills on display and breached the Madrid wall and delivered a perfect cross that was nicely headed in by Kevin de Bruyne past his Belgium teammate, Thibaut Courtois.

The Cityzens soon doubled the lead after only 10 minutes. De Bruyne delivered a low cross and the man in-form, Gabriel Jesus shuffled off David Alaba to win the ball before turning and placing the ball past the keeper. It was turning out to be a one-sided game as City were ruthlessly dominating on the attacking front.

However, Pep Guardiola was fuming, and he was right to do so as his side had plenty of opportunities to kill the game. City could have easily added plenty more and humiliated Real in the first 30 minutes, but the missed chances came back haunting. Karim Benzema scored his 40th goal of the season and pulled them back into the game.

Ferland Mendy delivered a cross into the box and Benzema was waiting to slot the ball into the net, which he did without giving Ederson a chance. However, that comeback was shunned early in the second half. Fernandinho played two crucial roles in the span of two minutes. The first one saw him cross the ball into the box beyond any defenders’ reach and Phil Phoden powerfully headed the ball past the keeper to restore the two-goal lead.

However, the heroics of the veteran was humbled by his compatriot Vinicius Junior who dummied him and later sprinted from the half to score a brilliant solo goal. This heated exchange went on a couple more times before the final whistle ended the high-octane match.

Manchester City continued to create chances at an alarming rate and they were once again awarded for their efforts. City’s Oleksandr Zinchenko was fouled on the edge of the penalty box by Toni Kroos, but instead of blowing his whistle, the referee played the advantage. The Madrid players were taken by surprise as they were expecting the official to blow the whistle. Bernardo Silva who collected the ball after the offence took a few steps inside and thrashed the ball into the nearest top corner. Courtois was too stunned to even try to save the shot.

City were once again granted glorious chances to finish off the game, but their lack of finishing touch made them pay once again. In the 82nd minute, the referee pointed to the spot after Aymeric Laporte seemingly handled the ball in an attempt to win it ahead of Benzema. The 34-year-old Frenchman who has been in excellent form this season stepped up and chipped the ball down the middle to keep the tie alive.

By scoring the penalty, Benzema has recorded his best ever season tally with 41 goals, and also overtook Robert Lewandowski as the leading goalscorer in the Champions League with 13 to his name. Thanks to his double and Vinicius’ solo goal, Real Madrid have kept their hopes of a comeback alive.

City will be disappointed for not having converted the plethora of opportunities handed to them. And it could come back haunting them if they fail to progress to the final. Although they currently have the upper hand, playing the second leg in Santiago Bernabeu could be a tremendous challenge as it was seen in Real’s comeback win over Chelsea. The powerhouses will be meeting each other on the fifth of May to deliver another action-packed semi-final.