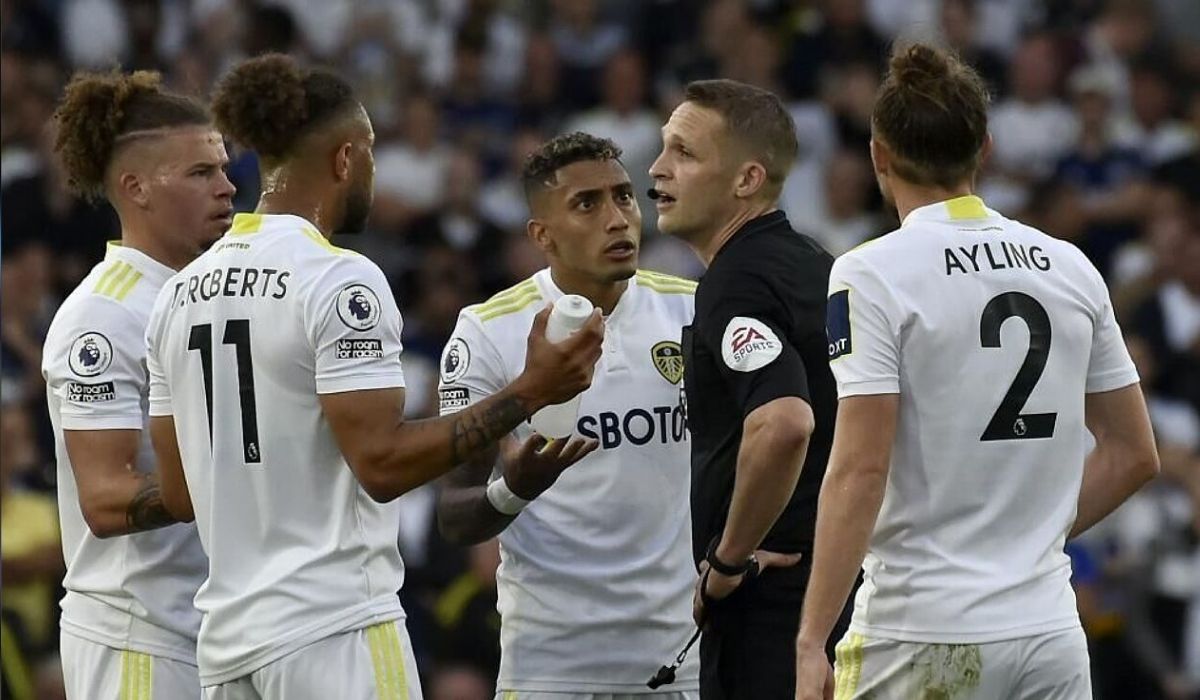 Leeds United completed an extraordinary comeback to defeat Wolverhampton Wanderers 3-2 in the Premier League. Despite going 2-0 down in the first half followed by four injury substitutions, Leeds took the game to the final minutes of the match where Luke Ayling scored the winner, keeping their survival hopes alive.

This fixture was a thrilling one and the complete 90 minutes entertained the home and away fans at Molineux Stadium. Both the sides created plenty of opportunities in the first 10 minutes, but it started heating up a few minutes later as both sides were dealt with injury blow. In the 17th minute, Ruben Neves became the first to get injured as he went down after he had some trouble with his knee.

Although he was not completely fit, he carried on for a few minutes before getting subbed off. He was replaced in the 25th minute by Francisco Trincao. However, a couple of minutes prior to this, Leeds was also dealt with a blow. Rodrigo had intercepted a ball, which he received over the top of Patrick Bamford.

Bamford failed to get control of his landing and landed awkwardly on his ankle. Despite getting medical treatment, the forward could not continue further as he limped off the pitch and made way for Sam Greenwood. While the few tense minutes stopped the play temporarily, Wolves took the lead right after the game resumed.

That opportunity was brilliantly build-up by Wolves, before the substitute, Trincao assisted Jonny Castro for the goal. A few minutes later, Leeds were dealt with another blow as Diego Llorente got injured. He was seen holding his back while making his way off the pitch for Robin Koch. Wolves had the momentum here and they used it to their advantage by pressing higher.

And to make things worse for the visitors, they were handed another injury setback in the added time of the first half. Their midfielder, Mateusz Klich caught a boot to his head as he tried to clear the ball. It resulted in a nasty cut above his eye and was led straight down the tunnel after receiving first aid. Charlie Cresswell came on for his place in the ninth minute of the added time.

With all the commotion taking place in the away end, Wolves capitalized once again and extended their lead to two in the 11th minute of the added time. This one was scored from a quick freekick when Joao Moutinho slotted a through ball to Daniel Podence who pulled it back to Trincao. The substitute hit a low shot from the edge of the box to make the scoreline 2-0.

The game was looking wound up for Leeds as they had lost crucial players to injury and were only left with one substitute as Klich’s change was regarded as a concussion substitute. However, luck was on their side as a crucial decision early in the second half changed the game on its head.

In the 53rd minute, Raul Jiminez was sent off after a collision with Illan Meslier. The goalkeeper was first to receive the ball, but the Mexican crashed into him because of the momentum. Jimenez had picked up a yellow card in the first half for his foul on Koch. And this collision handed him another yellow, resulting in his marching orders.

The collision also saw Leeds use up their final change as Kristoffer-August Sundquist Klaesson replaced the injured goalkeeper. The Whites saw this as their perfect opportunity to get back into the game and it is exactly what they did. 10 minutes after Wolverhampton Wanderers went down to 10-men, Jack Harrison slotted in their first goal which took some time as VAR had a look into it.

Moments later, they scored the equalizer through Rodrigo Moreno. Daniel James’ volley hit the post, and the rebound reached Rodrigo through Greenwood who slotted it off Saiss. Jose Sa could not recollect his ground, having attempted a save to that volley previously.

The match now favoured the visitors as they held the advantage, and Wolves were struggling to control the match with one man short. However, they held their ground until the final minute, when Ayling broke their hearts. Their constant pressure put Wolves on the back foot and them an opportunity. In the 90th minute, Leeds earned a free-kick which completed the comeback.

Harrison curled the ball into the box which wasn’t met by Struijk or the defender marking him. However, Ayling who was on the receiving end, let the ball bounce once, before hitting it through the keeper’s leg into the net. An unprecedented outcome was hastily received by the manager, Bruno Lage, who made all their remaining substitutions to grab a point, but it did not help them level the score.

With this win, both the sides remain in eighth and 16th place respectively. However, for Leeds United, it was a crucial win. While this was the first time they won a match after going down by two or more goals in the first half, this win has given them some breathing space from the relegation zone. With 29 points from 30 matches, they now sit seven points clear of 18th placed Watford.