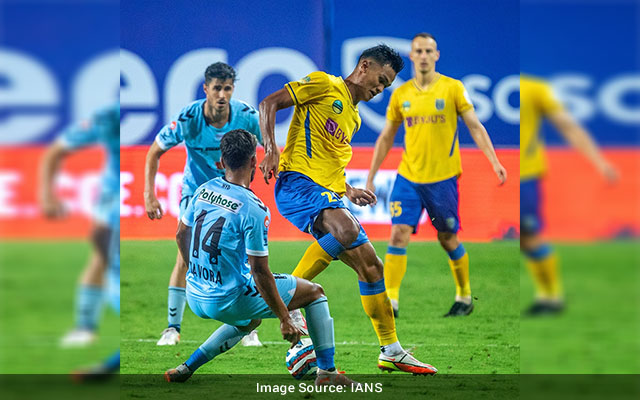 Spirits will remain high on Sunday as the Tilak Maidan Stadium, Vasco da Gama, gears for a power-packed game between the best in form Kerala Blasters FC and Hyderabad FC. In match number 55 of the Hero Indian Super League 2021-22, the two rivals will take on each other to claim the leader position in the points table.

To their credit, both the teams have had just one defeat in the league, the least so far. Kerala Blasters FC had to settle for draws in the last two matches and will be eager for a victory against Hyderabad FC to enter the top four in the table. Hyderabad FC, on the other side, currently standing at the second position, will try to solidify their position in the standings.

In striking similarities, both the teams have an unbeaten run for eight straight matches, and Sunday’s match can break this streak for one of the teams.

For KBFC, Adrian Luna and Sahal Samad have been the key to their success in the league. In the game against FC Goa, Luna saved the day by scoring a goal in the last minutes to draw it 2-2. The Spaniard has created maximum chances for the team. Similarly, midfielder Samad is in brilliant form, with four goals in nine matches to his name. The head coach of KBFC, Ivan Vukomanovic, would want them to continue their excellent form.

Hyderabad FC has had a great run this season, with their defence being the best in the league. They have conceded the least number of goals so far. For Hyderabad, Bartholomew Ogbeche has been the key player in their ascension to the top. The Nigerian has scored the maximum number of goals in this season. He has scored a total of 44 goals till now, which is the third-highest in the history of Hero ISL. He is now only four goals short of the all-time record holder Ferran Corominas, who scored 48 for FC Goa.

Furthermore, it will be interesting to watch Javier Siverio, who scored the crucial goal in time, which helped Hyderabad draw against North East United FC. The Head Coach of Hyderabad FC, Manuel Marquez, would want his men to continue their ace performance.