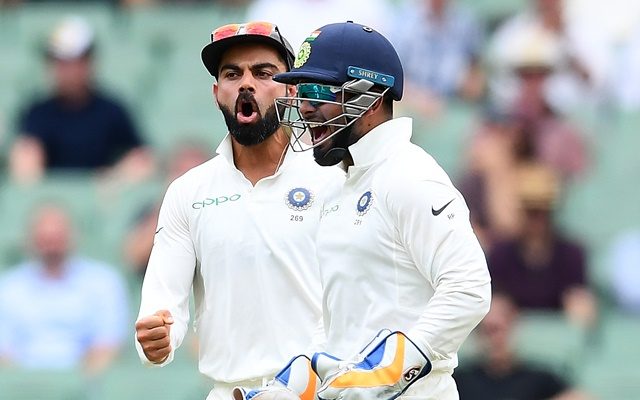 Virat Kohli’s aggression on the field is something we have seen often. He always wears his heart on his shoulders and sometimes, that might not go well with other teams too.

Several current stars of the Indian team began their international careers under Kohli’s captaincy, which means that there may have been moments when they would have gotten a taste of Kohli’s aggression.

One such player is the Indian team’s current wicketkeeper Rishabh Pant. The youngster who made his debut on India’s tour of England in 2018, revealed that he is not afraid of anyone but Kohli’s anger.

“I am not scared of anyone but Virat Bhaiya ke gusse se dar lagta hai (I’m scared of Virat Kohli’s anger),” said Pant in a video on the Delhi Capitals’ Twitter handle.

“If you are doing everything correctly, then why should he (Kohli) get angry? But if you make a mistake and someone gets angry with you, it’s good because you only learn from your mistakes,” said Pant.

Pant and Kohli will be in action once again for the upcoming Asia cup. The duo, along with other senior players were rested right after the England series in June.

The UAE will host the upcoming edition of the Asia Cup. The tournament was first scheduled in Sri Lanka but Asia Cricket Council decided to move the tournament out of the country because of the economical and political crisis in the country. However, Sri Lanka retained the hosting rights for the tournament.

India will begin their title defence against their arch-rivals Pakistan on August 28th. VVS Laxman will be the interim coach for the tournament in the absence of Head coach Rahul Dravid.

Dravid had tested positive recently and he will join the Indian team once he tests negative.

Also, Hong Kong is the other team to get into the Asia Cup. They ended on the top of the table in the recently concluded Qualifiers.

Unlike the 2018 edition, this tournament will take place in the T20 format as it will act as the preparatory tournament for the upcoming T20 World Cup in Australia.