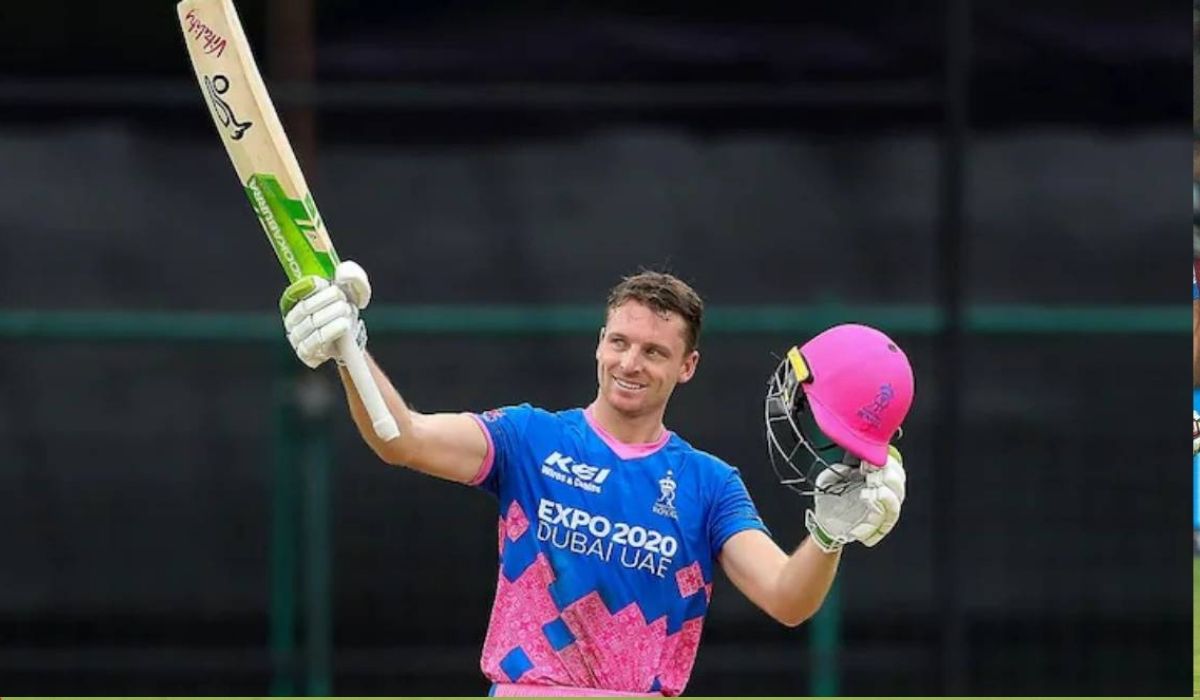 One of the best batsmen in T20 format, Jos Buttler has been in sensational form during the 2022 IPL season for Rajasthan Royals. Before the auction, the hard-hitting player was one of the players retained by Rajasthan Royals franchise.

It has been a remarkable season for the explosive opener from England. He became the third batsmen after Virat Kohli and David Warner to smash 800 runs in an IPL season. Due to his explosive batting and 5 top-quality bowling options including Trent Boult, Prasidh Krishna, Obed McCoy, Chahal and Ravichandran Ashwin.

Buttler provided explosive starts to the team and made sure that Rajasthan Royals post big totals or chase down targets easily. He has made so far 824 runs from 16 matches (16 innings) with 4 centuries and 4 half-centuries to his name. His performances stood out making life tough for opposition bowlers.

Jos Buttler started the IPL journey with a brilliant century against Mumbai Indians at Brabourne Stadium, CCI, Mumbai on 2nd April 2022. He put enough pressure on poor bowling by MI and scored 100 off 65 balls with 11 fours and 5 sixes. His knock helped RR post 193 for 8 in 20 overs. For his match winning knock, Jos Buttler was named the man of the match award.

Buttler displayed great hitting abilities against Kolkata Knight Riders played at Brabourne Stadium, CCI, Mumbai on 18th April 2022. He smashed KKR bowlers to all over the park and scored 103 off 61 balls with 9 fours and 5 sixes helping RR post massive total of 217 for 5. KKR fell short of the target by just 7 runs despite Shreyas Iyer’s and Aaron Finch’s knocks. Chahal changed momentum of game with a brilliant hattrick. Despite Buttler’s knock, Chahal was named the man of the match award for his hattrick.

The explosive kept the momentum going for RR with his 3rd century off IPL 2022 against Delhi Capitals on 22nd April 2022 played at Wankhede Stadium, Mumbai. Buttler demonstrated great hitting with 116 off 65 balls with 9 fours and 9 sixes that helped RR post 222 for 2.

Delhi Capitals could not cross the line as they managed 207 for 8. For his 116 off 65 balls, Buttler was named the man of the match award. He provided decent starts to the team and kept momentum going for RR. His form dipped with string of low scores. Despite that, RR finished at number 2 spot and got one bite of cherry.

Rajasthan Royals lost to Gujarat Titans in the first qualifier at Eden Gardens, Kolkata. He started slowly before smashing GT bowlers all over park remaining not out on 89 helping RR post 188 for 6. Despite his efforts, RR lost the match by 7 wickets.

Jos Buttler showed his class in the qualifier 2 against Royal Challengers Bangalore on 27th May 2022. Chasing down 158 runs to win, opener kept the pressure on RCB bowlers right from word go and completed fifty off 23 balls. He then slowed down but remained calm to complete century off 59 balls. Buttler smashed 10 fours and 6 sixes in his unbeaten 106 off 60 balls. For his brilliant knock, Buttler was named the man of the match award.

With one match to go, Buttler could cross David Warner’s record of 848 runs he scored for SRH during 2016 season. Under his captaincy, SRH registered their only IPL title.

Buttler would be hoping to provide another decent start for RR in the finals against top-quality bowling of Gujarat Titans. Buttler made life tough with attacking strokes during first six overs.

Kohli holds the record of most centuries in IPL with 4 during 2016 season where RCB reached the finals.

RR fans would be hoping that Jos Buttler plays another brilliant knock in the finals against table-toppers Gujarat Titans and help them to win their 2nd IPL title.