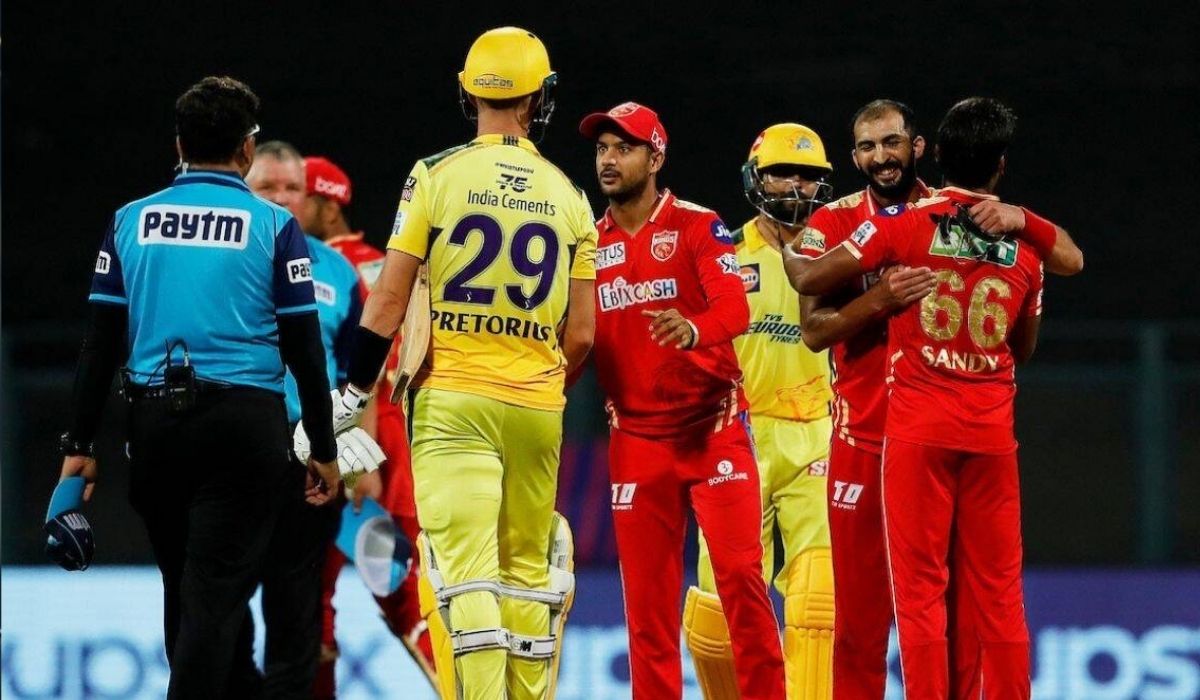 Punjab Kings bowled superbly in the death overs to deny CSK a win and beat the opponent by 11 runs in IPL 2022 at Wankhede Stadium on April 25. Punjab Kings posted a competitive score of 187/4 before getting past a valiant Ambati Rayudu to post a much-needed win. With this win, Punjab jumped to the 6th spot with 8 points in 8 games. CSK is placed 9th with 4 points in 8 games and is virtually knocked out of the tournament.

Punjab Kings was asked to bat first as chasing on small Wankhede ground under wet conditions is comparatively easy compared to defending totals here. PBKS also let go of their all-out attack approach and began cautiously to build partnership before exploding in the second half of the innings.

Their openers Mayank Agarwal and Shikhar Dhawan posted a 37-run stand in 5.5 overs before the former was dismissed, caught by Shivam Dube off Maheesh Theekshana for 18. Dhawan then found an able partner in Bhanuka Rajapaksa to stitch a 110-run stand for the second wicket. Rajapaksa was dismissed by Dwayne Bravo for 32-ball 42.

Dhawan continued with his role of batting through the innings and combined with other batsmen to take Punjab to 187/4. Liam Livingstone made 7-ball 19 with 1 four and 2 sixes to provide the much-needed momentum to the innings. Livingstone was dismissed, caught by Mukesh Choudhary off Bravo’s bowling. Dhawan remained unbeaten on 88 off 59 balls with 9 fours and 2 sixes. For CSK, Bravo was the most successful bowler, taking 2/42.

CSK’s powerplay woes continued as the top-order struggled to score runs freely. Opener Robin Uthappa was the first to depart, giving a catch to Rishi Dhawan off Sandeep Sharma for 1. Mitchell Santner, who was promoted to No 3 again, failed to get going and was dismissed bowled by Arshdeep Singh for 15-ball 9.

Shivam Dube, who started the tournament with a bang, could not repeat his earlier heroics and was dismissed bowled for 8 by Rishi Dhawan. At 40/3 in 7 overs, CSK’s task was cut out. But Ambati Rayudu and opener Ruturaj Gaikwad put their heads down to resurrect the innings. The two posted a 49-run stand in 5.3 overs before Gaikwad holed out to Agarwal off Rabada for 30.

At 89/4 in 12.3 overs, the asking rate was almost 14 runs per over. It was then that Rayudu broke loose and started hitting fours and sixes. In the 16th over bowled by Sandeep Singh, Rayudu cracked three straight sixes to bring down the equation to 47 runs from 24 balls. But with Rayudu tiring, and Punjab bowlers Arshdeep and Rabada giving nothing away, CSK could manage just 20 runs in the next three overs, and also lose Rayudu for 78 off 39 balls with 7 fours and 6 sixes.

With 27 runs needed off 6 balls, it was too much of an ask for MS Dhoni as well. Dhoni departed after hitting a six in the last over, and the CSK chase fizzled out.