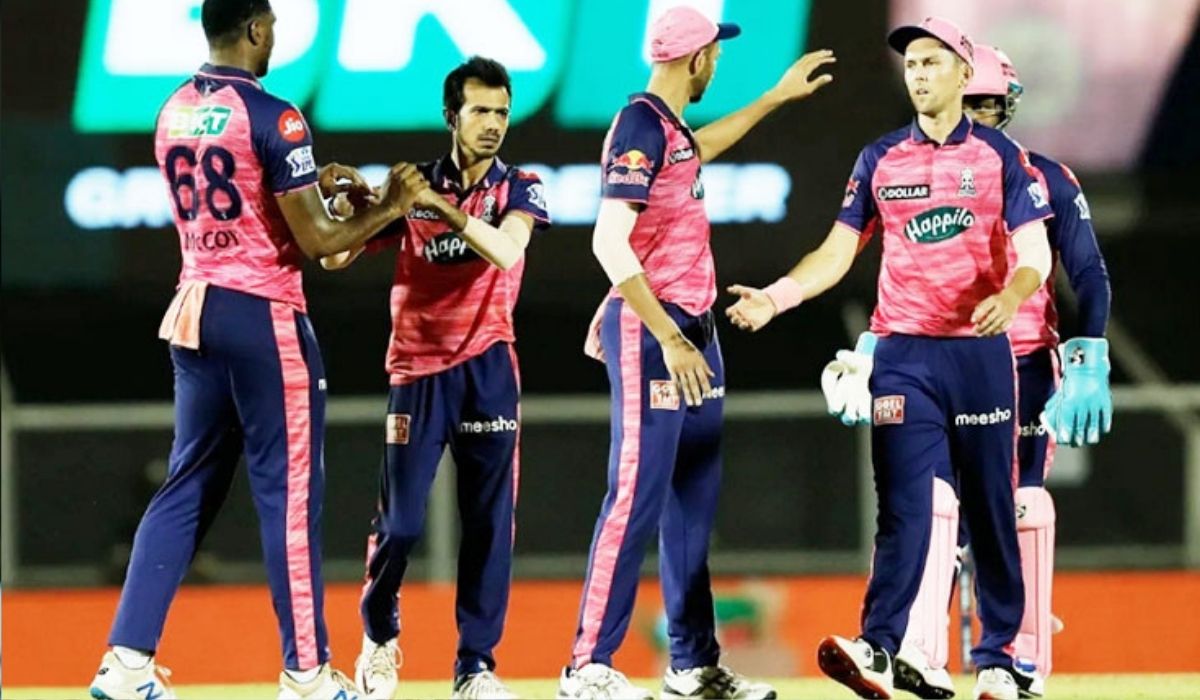 Jos Buttler scored his second century of IPL 2022, while YS Chahal took a five-wicket haul, including a hat-trick, to guide Rajasthan Royals to a 7-run win over KKR at Brabourne Stadium on April 18. Buttler scored 103 to help Rajasthan score 217/5 before Chahal took 5/40 to bowl out KKR for 210. With this win, Rajasthan moved to second in the points table, with 8 points, having won 4 out of 6 games. KKR is 6th with 3 wins out of 7 games.

Asked to bat first on a batting beauty, Rajasthan Royals put up a great opening start, with Devdutt Padikkal and Buttler putting on 97 runs in 9.4 overs. Buttler was the more aggressive of the two, hitting across the line, and on the top as the ball came nicely onto the bat. Padikkal fell for 18-ball 24 with 3 fours and 1 six before being bowled by Sunil Narine.

Rajasthan captain Sanju Samson then played a cameo of 19-ball 38 to give good support to Buttler, ensuring the early momentum was not lost. The two took the Royals total to 164/2 in the 16th over. However, a mini-collapse saw Jos Buttler falling for 103, Riyan Parag for 5 and Karun Nair for 3. Buttler cracked 103 off 61 balls with 9 fours and 5 sixes before he holed out in the deep to Varun Chakravarthy off Pat Cummins.

The collapse made Royals in danger of falling a few runs short. But Shimron Hetmyer played a small cameo of 13-ball 26 not out, hitting two sixes in the last over to see Royals end up on a commanding total of 217/5. Narine was the best bowler for KKR, taking 2/21.

KKR fielded a new opening pair of Aaron Finch and Sunil Narine. The start was disastrous as Narine was run-out on the first ball of the innings via a throw from Hetmyer. Narine was out without facing a single ball. Captain Shreyas Iyer then combined with Aaron Finch to give the Royals a mighty scare. The two put on 106 runs for the second wicket in just 8.5 overs. Finch was devastating, lofting, cutting, and driving with aggression. He fell while uppercutting a wide delivery from Prasidh Krishna straight to third-man Karun Nair for 58 off 28 balls with 9 fours and 2 sixes.

At 148/2 in the 13th over, it looked like a cakewalk for KKR, but then Royals pulled things back through Chahal. The former RCB spinner dismissed Nitish Rana for 11-ball 18 as the left-hander holed out in the deep to Buttler. Out came Andre Russell, but R Ashwin bowled a beautiful carrom ball to bowl Russell for a golden duck.

Returning for his last over of the match, Chahal first stumped Venkatesh Iyer for 6 on the first ball. He then had Shreyas Iyer on the fourth delivery as the KKR captain fell LBW for 85 off 51 overs with 7 fours and 4 sixes to break the backbone of KKR batting. Surprisingly, Shivam Mavi was promoted ahead of Cummins, and the former holed out in the deep for a golden duck. On a hat-trick for the second time in an over, Chahal got Cummins to edge it behind off a big leg-spinner and celebrated the treble wildly with his meme stance. Chahal ended his spell with 5/40.

Umesh Yadav kept KKR hopes alive by cracking 2 sixes and a four off Trent Boult’s last over – the 18th of the innings. With 11 runs needed off 6 balls, Obed McCoy dismissed Sheldon Jackson and Umesh to win the match for his team by 7 runs. Umesh made 9-ball 21 with 2 sixes and a four.