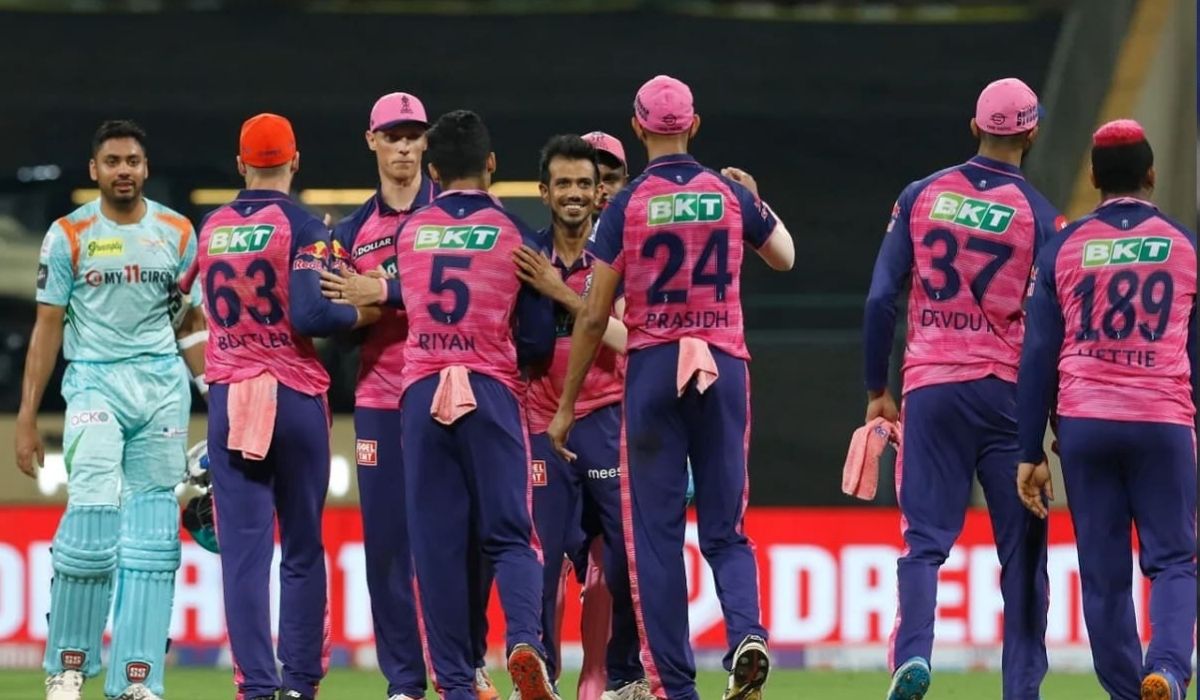 Rajasthan Royals survived a scare to eke out a 3-run win over Lucknow Super Giants in IPL 2022 at the Wankhede Stadium on April 10. Chasing a target of 166, LSG looked down and out at 102/7 in the 16th over. But Marcus Stoinis, playing his first match in IPL 2022, threatened to take the game away with his power-hitting before an excellent last over from Kuldeep Sen saw Royals home by 3 runs.

Royals dropped Yashasvi Jaiswal and opened with Jos Buttler and Devdutt Padikkal. The two put on a quick stand of 42 runs in 5.1 overs before Buttler was bowled by Avesh Khan for 13. Royals captain Sanju Samson joined Padikkal in the middle, but the skipper could not capitalize on a good start and fell LBW to Jason Holder for 13. Padikkal fell next, giving a catch to Holder off K Gowtham for 29 runs off 29 balls with 4 fours. When Rassie van der Dussen, who was playing his first match in IPL 2022, was bowled by Gowtham for 4, Royals was in deep trouble at 67/4 in the 10th over.

Shimron Hetmyer then played a matured innings, starting slow in a bid to build a partnership with R Ashwin, before exploding in the death overs. Ashwin too played a great supporting role, trying his best to lift Royals to the power of strength. The two posted a stand of 68 runs in 8.3 overs before Ashwin retired himself out so that a power-hitter could cash in the death overs. Ashwin made 23-ball 28 with 2 sixes.

Hetmyer kept his best for the last, just dealing in sixes to give the necessary momentum to the innings. He ended up with 36-ball 59 not out with 1 four and 6 sixes to take Royals to 165/6. Gowtham was the best bowler for Lucknow, taking 2/30.

LSG’s start was nightmarish, losing their captain and opener, KL Rahul, for a first-ball duck bowled by Trent Boult. The ball moved in straight, found a big gap between bat and pad, and rattled the stumps of Rahul. Gowtham, who was promoted to No 3 in a surprise move, fell immediately on the next legitimate ball, as he was wrapped on the pads by another incoming delivery from Boult. Lucknow lost two wickets in 2 legitimate balls. They were soon reduced to 14/3 as Jason Holder mistimed a pull to Ashwin off Prasidh Krishna’s over.

Opener Quinton de Kock and Deepak Hooda then build the innings with a patient stand of 38 runs in about 6 overs. Hooda was looking good but was bowled by Sen for 25. Ayush Badoni then fell next as he gave a catch to Riyan Parag off Chahal’s bowling for 5. Krunal Pandya then joined de Kock in the middle, and raised hopes for a win, with a stand of 26 runs in 3.3 overs. But the two fell in the same over a run apart off Chahal’s bowling to leave LSG chase in tatters at 102/7.

Stoinis then took charge and dominated the strike to lift LSG. However, he just fell short. In the last over, he smacked a four and six, but could not achieve the 15 runs required for a win as Sen bowled tight line and length. Stoinis cracked 38 not out off 17 balls with 2 fours and 4 sixes. Chahal was the best bowler of the match, taking 4/41.