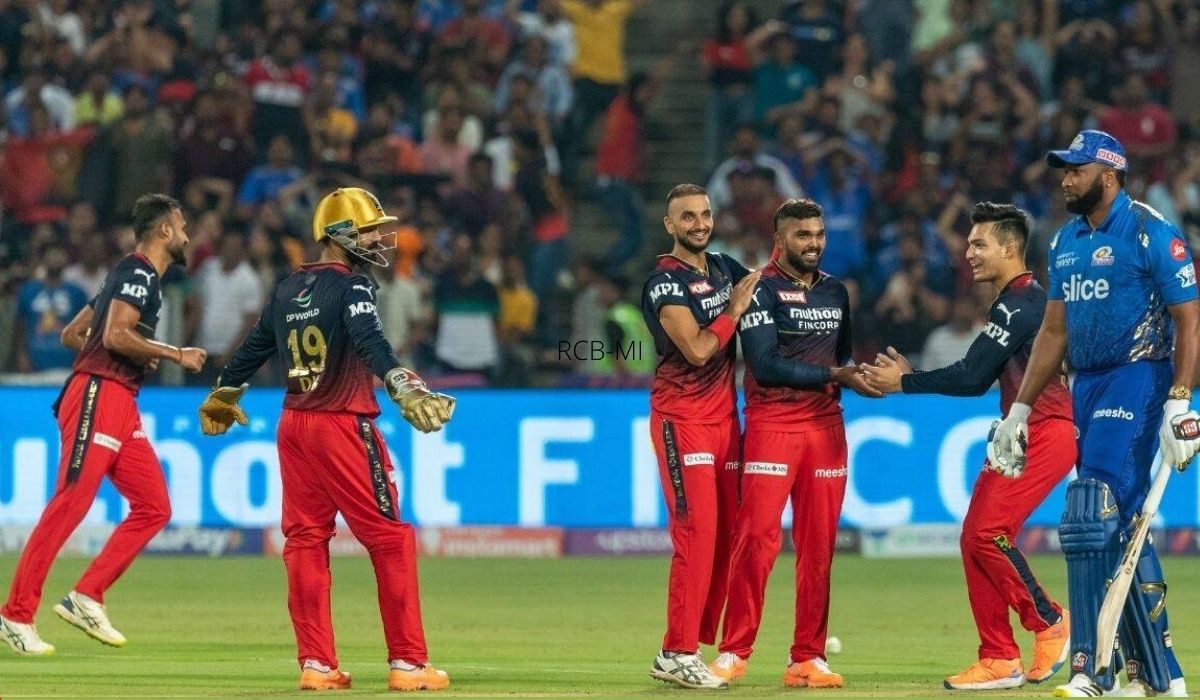 RCB continued their winning momentum, posting their third straight victory in 4 games when they defeated Mumbai Indians by 7 wickets at Pune on April 9. It was Mumbai’s fourth straight loss in as many games and remains winless along with CSK in the competition so far.

Told to bat first, Mumbai Indians openers began on a slow note in the powerplay overs, scoring just 5 runs in 2 overs. Rohit Sharma then broke loose, capitalizing on short and length balls bowled by Mohammed Siraj, carting his bowling for a four and a six in the 4th over.

With the momentum gained, Rohit and Ishan Kishan then took the first-wicket stand to 50 runs in 6.2 overs. RCB skipper Faf du Plessis then brought his best bowler Harshal Patel to the attack. The move paid immediate dividends as Rohit played early to a slower ball and handed an easy return catch to Patel.

Wanindu Hasaranga de Silva then came to the party, catching a young Dewald Brevis plumb for 8. Ishan Kishan fell next, cutting a wide ball to third man fielder Mohammed Siraj off the bowling of Akash Deep. Tilak Varma was then run-out thanks to a direct hit from Glenn Maxwell. Kieron Pollard was out LBW for a golden duck off Hasaranga de Silva . From 50/2, Mumbai slumped to 62/5 in just 3.3 overs.

However, RCB had not planned for Suryakumar Yadav, who once again rallied the batting line-up on his shoulders. SKY cracked 37-ball 68 not out with 5 fours and 6 sixes to take his side to 151/6. He and Jaydev Unadkat combined to post a 73-run unbeaten stand for the seventh wicket. Unadkat remained unbeaten on 14-ball 13.

RCB innings too began slowly, but this time it was a young batsman in Anuj Rawat who took the initiative to up the scoring rate. Rawat cracked two straight sixes off Unadkat in the powerplay overs. Rawat walked down the track to cart fast bowler Unadkat over his head for two straight sixes. It had class written all over it.

Faf continued playing the second fiddle for this stand. Meanwhile, Faf let young Rawat dominate the strike. Faf struggled to get the big shots going. Faf-Rawat stand finally came apart when Faf holed out the deep to SKY off the bowling of Unadkat. The two combined to put a 50-run stand in 8.1 overs.

Virat Kohli then joined Rawat in the middle, and the two showed great urgency to get some quick runs and bring the required run-rate down. Rawat overshadowed his teammate Kohli with some scintillating shots. His six sixes had class written all over it. Rawat was run-out for 66 with 2 fours and 6 sixes.

It was when less than 20 runs were needed for a win, Kohli was LBW to Dewald N Brevis for 48. Maxwell then joined Dinesh Karthik in the middle. Maxwell cracked two boundaries off a switch hit and drive-through covers to seal the win for RCB.