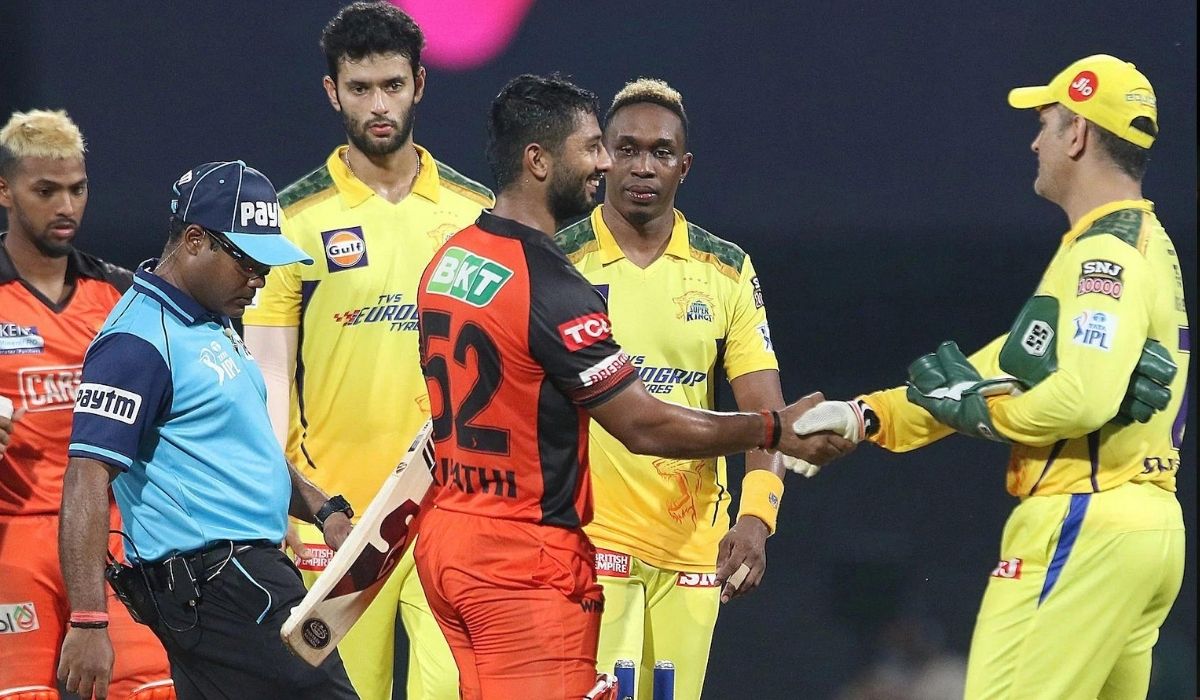 SRH posted their first win of IPL 2022 in 3 games, when they handed CSK their fourth straight defeat in 4 games at DY Patil Stadium on April 9. SRH openers finally came good to beat defending champions CSK by 8 wickets and 16 balls to spare as they chased down 155 for a win. SRH opener Abhishek Sharma led the chase with a knock of 75 – his first IPL fifty.

On a slow pitch, CSK openers struggled to score freely and were dismissed within the powerplay overs. Ruturaj Gaikwad, who was the orange cap holder last season, failed yet again as he was bowled by T Natarajan for 16. The other opener Robin Uthappa too followed suit, giving a catch to Aiden Markram off the bowling of Washington Sundar.

Moeen Ali and Ambati Rayudu then stitched together a stand of 62 runs for the third wicket in 8.2 overs. Rayudu fell for 27-ball 27. But Moeen kept going on the other end. He helped CSK cross the 100-run barrier by the 14th over. But Moeen was soon dismissed for 35-ball 48 with 3 fours and 2 sixes.

Except for captain Ravindra Jadeja, none of the other players came good. Shivam Dube, who has impressed so far with his big-hitting, fell for 3 off Natarajan’s bowling.

MS Dhoni, the former CSK captain, was out for 3 and could not give the finishing touch to the innings.

Jadeja, however, scored some useful runs lower down the order. Jadeja made 15- ball 23 with 2 fours and 1 sixes. CSK made a below-par score of 154/7. Meanwhile, Washington Sundar was the most successful bowler for SRH with 2/21.

SRH has faltered so far in their batting line-up. However, SRH persisted with under-fire opener Abhishek Sharma who finally came good against CSK this season.

Sharma and Kane Williamson combined to put a stand of 89 in 12.1 overs for the first wicket. Williamson struggled to score runs, but let Sharma blossom in his role as the opener. Williamson fell for 40-ball 32 with 2 fours and 1 six.

Meanwhile, Sharma looked to be batting on a different surface altogether. He treated the CSK bowling attack with disdain and posted another valuable stand of 56 runs in 5 overs with Rahul Tripathi who looked in great touch as well.

Sharma made his new opening position his own as he cracked a valuable 75 off 50 balls with 5 fours and 3 sixes. Sharma fell when he gave a catch to Chris Jordan off the bowling of Dwayne Bravo.

Post Sharma’s departure, Tripathi finished off the chase in the company of Nicholas Pooran. Tripathi scored 39 not out off 15 balls with 5 fours and 2 sixes. Sharma was named man of the match.

With this loss, CSK faces the difficult task of winning 8 games out of the remaining 10 to have a chance of sneaking into the play-offs.