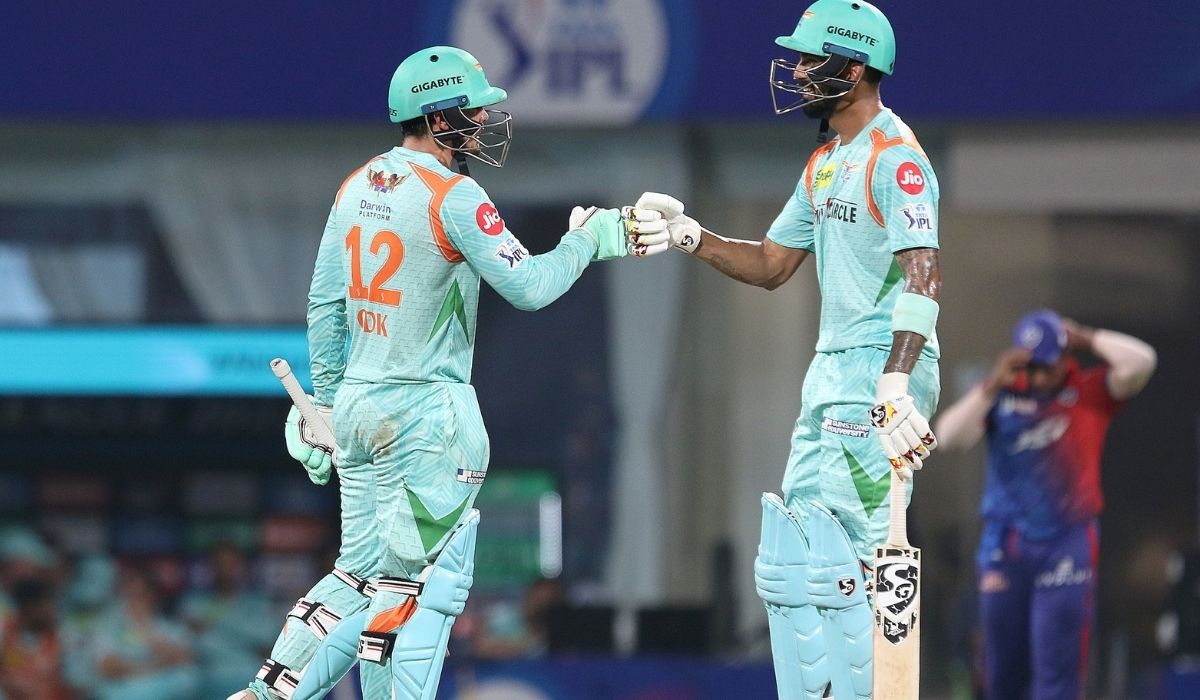 Lucknow Super Giants showed great fighting spirit to first restrict Delhi Capitals for 149/3, and then chase down the target in the last over of the match at DY Patil Stadium in IPL 2022 on April 7. Delhi has had a great chance to post a big total after opener Prithvi Shaw’s 34-ball 61, but LSG bowlers bounced back to restrict the opponents to below 150. LSG opener Quinton de Kock then rallied the chase with 52-ball 80. It was the third straight win for LSG in 4 games, while Delhi posted their second loss in three games.

Put into bat, Delhi opened with Shaw and David Warner, who was playing his first match in IPL 2022. Shaw farmed most of the strike and got Delhi to a great start. In a first-wicket stand of 67 in 7.3 overs, Shaw himself scored 61 runs. Shaw cracked 9 fours and 2 sixes during his knock and was out edging to keeper de Kock while trying to cut a wide delivery from K Gowtham.

Delhi then promoted Rovman Powell to partner with Warner. And the two batsmen slowed down the game, with Delhi managing just 7 runs in the next 3 overs, and losing both the players. Warner fell for 12-ball 4, giving a catch to Ayush Badoni off Ravi Bishnoi. Powell got bowled for 10-ball 3 to Bishnoi again.

It brought Sarfaraz Khan to joint captain Rishabh Pant in the middle. And they found it tough to unleash their big strokes. Pant, who loves to attack, found his timing off, but still managed to crack a couple of sixes and three fours in his 36-ball 39 not out. Sarfaraz made 28-ball 36 not out with 3 fours. The two put on a 75-run unbeaten stand for the fourth wicket in 9.3 overs. The final flourish never came off their bat, as Delhi kept things tight in the last three overs, conceding just 18 runs. Bishnoi took 2/22 in the match. In fact, LSG spinners took all three wickets to fall for 57 runs in 8 overs.

With the dew finally playing spoilsport, Delhi found it tough to stop LSG openers KL Rahul and de Kock from running away from the game with a match-winning opening stand of 73 runs in 9.4 overs. Rahul fell for 25-ball 24 with 1 four and 1 six, giving a catch to Shaw off Kuldeep Yadav. Meanwhile, De Kock looked in great touch as he severely punished Anrich Nortje’s bowling. Nortje, who was playing his first match of IPL 2022, was taken off after bowling a few beamers.

Next, Evin Lewis (5) gave a catch to Kuldeep on the bowling of Lalit Yadav for 5, while Deepak Hooda holed out in the deep to Axar Patel off Shardul Thakur for 11 to make the game interesting, and kept Delhi’s hopes of pushing for a win alive.

But there was no stopping de Kock, who looked to be batting on a different pitch altogether. De Kock skied a catch to Sarfaraz off Kuldeep Yadav for a 52-ball 80 with 9 fours and 2 sixes. But LSG was still the favourites to win the match from there. A tight over from Thakur in the 18th over saw the match hang in balance.

But Krunal Pandya hit a six in the penultimate over to make victory a formality. Eventually, it was young Badoni was cracked a four and a six in the last over to win the match.