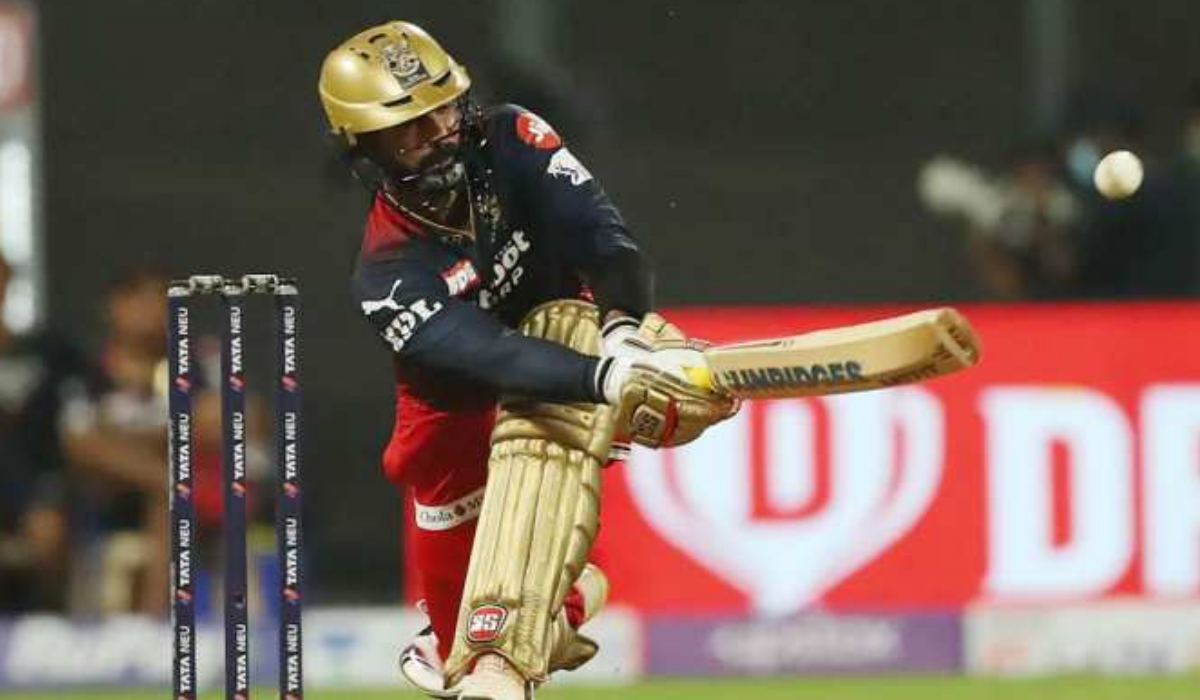 Dinesh Karthik and Shahbaz Ahmed combined to help RCB post a come-from-behind win against Rajasthan Royals at the Wankhede Stadium in IPL 2022 on April 5. Chasing a target of 170, RCB was reduced to 87/5 in the 13th over before Karthik-Shahbaz counter-attacked Rajasthan bowlers to finish off the game with 5 balls to spare. However, it was Harshal Patel who cracked the winning six for RCB. Also, it was the first loss for Rajasthan in three games.

Put into bat, Rajasthan lost opener Yashasvi Jaiswal early for 4 as he was bowled by David Willey. Devdutt Padikkal, who played for RCB last season, combined with opener Jos Buttler to put a 70-run stand in 8.1 overs. The wicket was slow and two-paced, and it didn’t allow the two batsmen to play the shots easily. Still, the two managed to stitch a valuable stand. Buttler was lucky to survive two dropped catches.

Padikkal fell for 29-ball 37 with 2 fours and 2 sixes off Harshal Patel as Virat Kohli took a good catch running backward. Rajasthan skipper Sanju Samson then was caught and bowled by Wanindu Hsaranga de Silva for 8.

Shimron Hetmyer, also an ex-RCB player, then joined forces with Buttler to give the innings the necessary momentum. Hetmyer too struggled to time the ball due to the slow pace of the wicket. But Hetmyer and Buttler made the most of the last two overs bowled by Mohammed Siraj and Akash Deep, taking 42 runs, including 5 sixes and a four, as Rajasthan made 169/3. Buttler remained not out on 70 off 47 balls with 6 sixes. Hetmyer cracked 42 not out off 31 balls with 4 fours and 2 sixes. Harshal Patel took 1/18 in his 4 overs.

RCB has had a dream start to the innings, making 55 in 7 overs with openers Faf du Plessis and Anuj Rawat cracking 9 boundaries between them. However, the introduction of YS Chahal saw Faf holing out in the deep to Trent Boult for 29 off 20 balls with 5 fours. Rawat departed next as he edged an outswinger from Navdeep Saini to Samson.

Willey was out for a two-ball duck as he was bowled by Chahal. Virat Kohli ran himself out in the next over while looking for a non-existent single for 5. When Sherfane Rutherford gave a catch to Saini off Boult, RCB was reduced to 87/5 in 13 overs and it looked all over for Faf’s men. But Karthik and Shahbaz showed great character to take on Rajasthan bowlers, and played shots all across the ground.

The 14th over bowled by Ashwin proved to be a gamechanger as Karthik cracked 3 fours and 1 six to take 21 runs off the over. Shahbaz too joined the fun, taking on Prasidh Krishna for a four and a six in the 16th over. Karthik also brought up his innovative stroke-play to throw Rajasthan plans in disarray.

Shahbaz fell while trying to play a cheeky lap shot and was bowled by Boult after cracking a six and a four in the same over. Shahbaz made 26-ball 45 with 4 fours and 3 sixes. Karthik finished off the chase in the company of Patel, who cracked the winning six. Karthik made 23-ball 44 not out with 7 fours and 1 six.