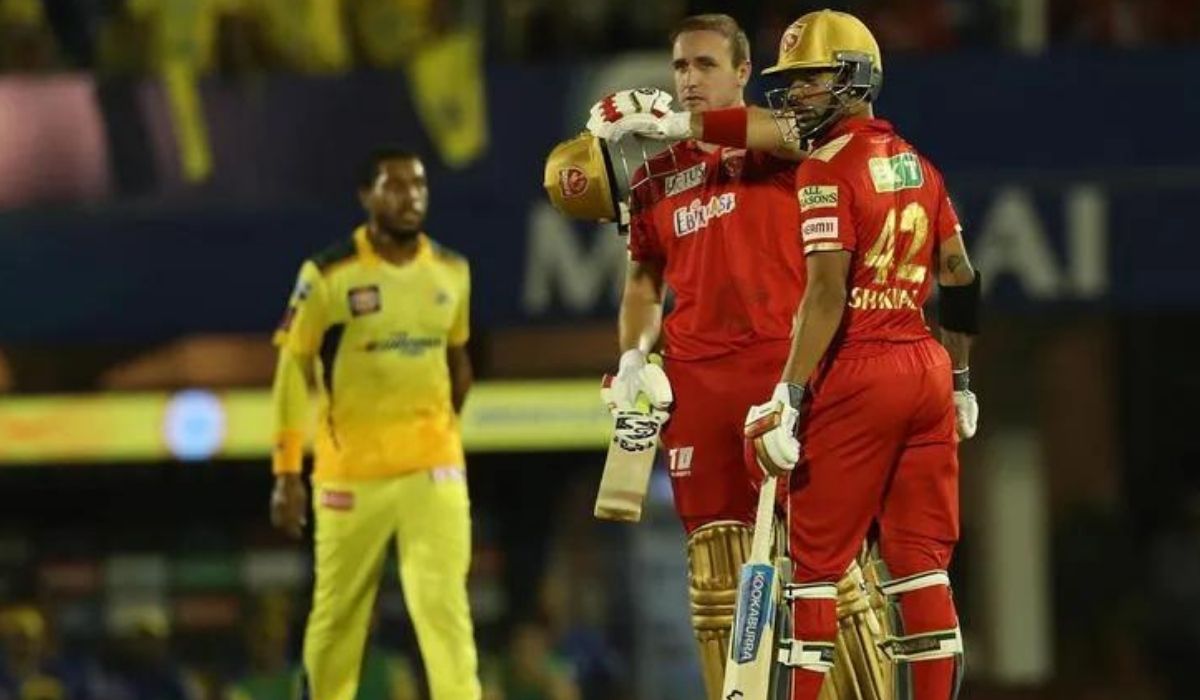 Punjab Kings defended a total of 180 comfortably, handing defending champions Chennai Super Kings their third loss in as many matches at Brabourne Stadium in IPL 2022 on April 3. Punjab won the match by 54 runs, with Liam Livingstone hogging the limelight with both bat and ball. Livingstone cracked 32-ball 60 and later took 2/25 to make a memorable night for himself and Punjab.

Punjab was asked to take the first strike, and they had a disastrous start, losing captain Mayank Agarwal for 4 in the first over itself. Agarwal slashed a wide delivery straight to Robin Uthappa at point off Mukesh Choudhary. Bhanuka Rajapaksa then fell in the next over as he was run-out for 9 after a mix-up with Shikhar Dhawan.

The dismissal brought Liam Livingstone to the middle. He and Dhawan posted a 95-run stand for the third wicket in 8.4 overs. Livingstone looked in a great mood, trying to go over the top almost every second delivery. He spooned an easy catch to the short fine-leg fielder when he was yet to reach fifty, but Ambati Rayudu dropped a sitter.

Livingstone then fell next, holing out at the same spot, top-edging a wide delivery to Rayudu at short fine-leg off Jadeja’s bowling, but the CSK batsman didn’t repeat his mistake this time and sent Livingstone back. Livingstone made 32-ball 60 with 5 fours and 5 six. When Livingstone was dismissed, Punjab was 111/4 in the 11th over and looked good for a score above 200.

But CSK pulled things back, not allowing Punjab batsmen to get the boundaries easily. Jitesh Sharma played a cameo of 17-ball 26 with 3 sixes to ensure Punjab reached 180/8. Otherwise, the total would have been much lower. Chris Jordan was the best bowler for CSK, taking 2/23.

CSK opener Ruturaj Gaikwad is having a nightmarish season so far, falling for a single-digit score for the third time in a row. He fell edging it behind to Dhawan off Kagiso Rabada’s over for 1. In the earlier 2 matches, Gaikwad scored 1 and 0. The reliable Uthappa too departed early, falling to Vaibhav Arora for 13. Moeen Ali then chopped a ball onto his stumps for a second-ball duck off Arora to leave CSK in bother at 22/3 in the fifth over.

CSK captain Jadeja fell in the identical fashion, with the ball crashing onto the stumps after an inside edge off Arshdeep Singh for a third-ball duck. Rayudu too struggled to get going, edging it to keeper Sharma off Oden Smith’s bowling for 13 to leave CSK struggling at 36/5.

MS Dhoni then joined Shivam Dube in the middle. Dhoni dropped anchor, while Dube started taking risks to keep the scoreboard going. The two posted a 62-run stand in 7.2 overs before Dube fell for 30-ball 57 with 6 fours and 3 sixes off Livingstone bowling.

Next ball, Dwayne Bravo gave a return catch to Livingstone who dived to his left to take a brilliant catch. At 98/7, it was all on Dhoni to help the team to reduce the margin of loss. Dhoni fell soon thereafter post his request for a change of bat. He edged it to the keeper off leg-spinner Rahul Chahar for 23 with 1 four and 1 six. Chahar polished off the tail to help his team bowl out CSK for 126 and win the match by 54 runs. Chahar took 3/25 in the match.