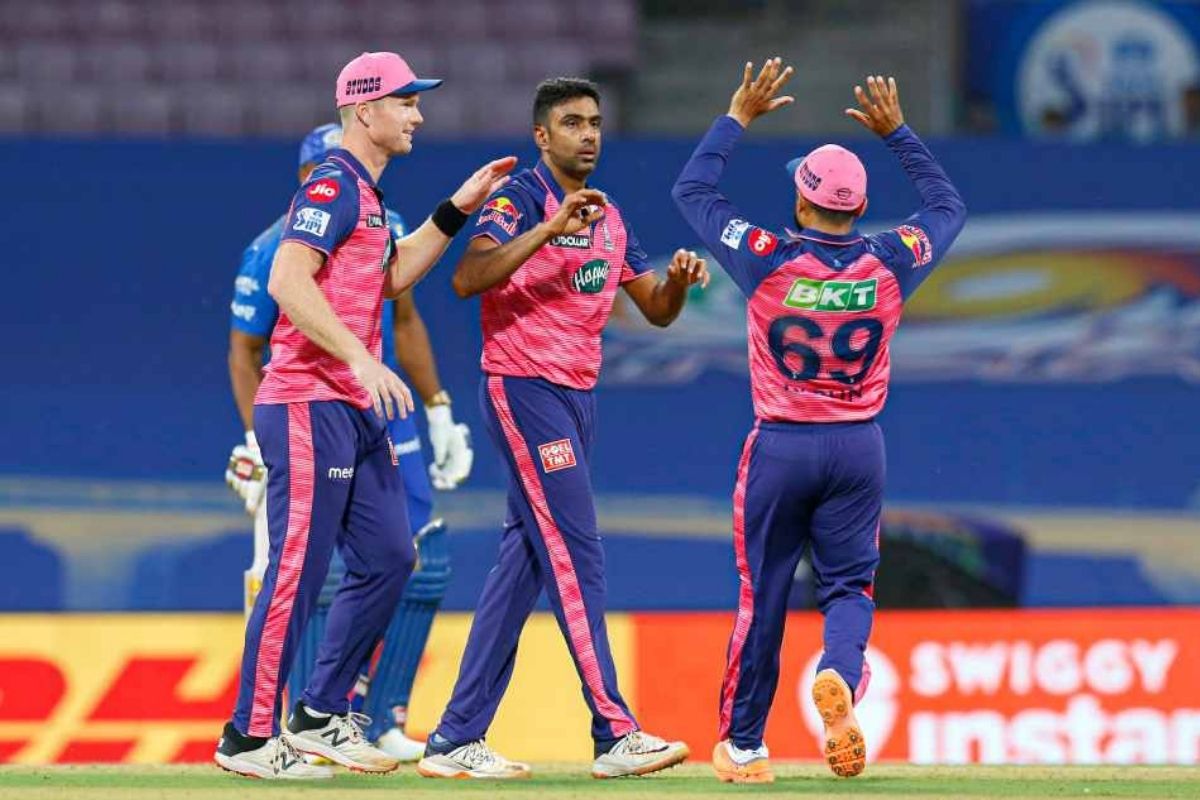 Rajasthan Royals successfully defended twice in two straight matches in IPL 2022 when they defeated Mumbai Indians by 23 runs at DY Patil Stadium on April 2. Royals is now the only team in IPL 2022 to defend a score, and that too twice. Royals posted a score of 193/8, thanks to Jos Buttler’s second IPL ton, before restricting Mumbai to 170/8. It was Mumbai’s second straight loss and is yet to post a win in IPL 2022.

Asked to take the first strike, the Royals began with opener Yashasvi Jaiswal falling early for 1 to Jasprit Bumrah in the third over. Royals’ other opener Buttler looked in great touch. He made the most of the scoring in the powerplay overs before Devdutt Padikkal fell for 6 off the bowling of Tymal Mills.

The wicket brought Royals captain Sanju Samson to the crease. Samson and Buttler then matched each other strokes for strokes, stitching a stand of 82 runs for the third wicket in 8.2 overs. Buttler and Samson took on Murugan Ashwin’s bowling, cracking 2 sixes and a four to take 21 runs off the over.

With Buttler slowing down as he neared his ton, Samson took the extra risk and holed out to Tilak Varma off Kieron Pollard bowling in the 15th over. Samson played a cameo of 21-ball 30 with 1 four and 3 sixes.

Shimron Hetmyer then joined Buttler in the middle and took the responsibility of increasing the scoring rate. In the 17th over, Hetmyer cracked 2 fours and 2 sixes as Pollard conceded 26 runs off the over. Hetmyer lost his wicket to Bumrah, falling for 14-ball 35 with 3 fours and 3 sixes.

Buttler reached his century in the next over, but could not add any more runs as he was bowled by a yorker from Bumrah. Buttler made 100 off 68 balls with 11 fours and 5 sixes. Royals fell a few runs short in the end, but still managed a match-winning total of 193/8. Bumrah took for 3/17 in the match.

A lot rested on Mumbai openers Rohit Sharma and Ishan Kishan to take the team to a good start, but the pressure of a tall score got to captain Rohit who fell for 10, giving a catch to Riyan Parag off Prasidh Krishna’s bowling. Amolpreet Singh fell cheaply for 5 off Navdeep Saini.

The dismissal brought Tilak Varma to the middle. Varma and Kishan combined to put a stand of 81 runs in 9 overs and threatened to take the game away from Royals. Kishan, meanwhile, dropped anchor and let Varma do the bulk of the scoring. Kishan departed after cracking 43-ball 54 with 5 fours and 1 six as he holed out in the deep to Saini off Trent Boult.

Varma was impressive as he played some delightful and creative strokes all across the ground. His reverse sweep over the third man off R Ashwin was class written all over it. However, R Ashwin had his revenge next ball, bowling Varma around his legs, and gave the Mumbai batsman a wild send-off. Varma cracked 33-ball 61 with 3 fours and 5 sixes.

YS Chahal then joined the fun, dismissing Tim David LBW for 1, and Daniel Sams for a golden duck on the next ball. Chahal could have his hat-trick if only substitute Karun Nair had held on to the catch off Murugan Ashwin’s bat.

It all rested on Pollard then to see his team across the line, but Royals bowled tight line and length wide off the stumps to deny the West Indian any scoring shots. Pollard finally fell on the last ball of the match for 22 off Saini’s bowling as Mumbai slumped to a second straight loss.