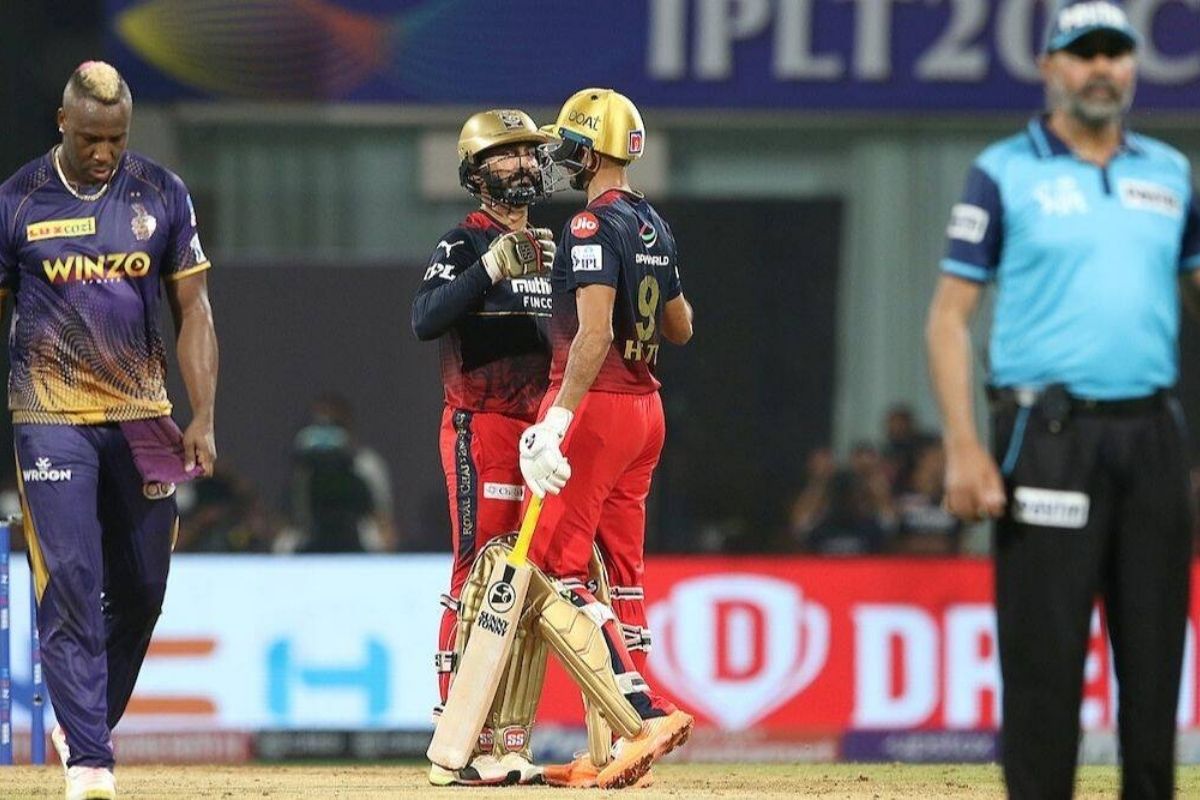 RCB fought tooth and nail to eke out a 3-wicket win against KKR in the 6th match of IPL 2022 at DY Patil Stadium in Mumbai on March 30. Chasing a low target of 129, RCB managed to overhaul the score with 4 balls and 3 wickets to spare. The match was poised till the last over before Dinesh Karthik hit a six and a four to seal the win in the 20th overs bowled by Andre Russell.

Asked to take the first strike, KKR openers struggled to get going on a bouncy pitch. Venkatesh Iyer was the first to go as his mistimed hit was caught and bowled by Akash Deep for 10. Mohammed Siraj then came to the party, getting Ajinkya Rahane to hole out in the deep to Shahbaz Ahmed for 9.

Deep, on the other hand, continued to rake up a good pace and made Nitish Rana mistime a pull to David Willey for 10. At 44 for 3, KKR was in trouble but captain Shreyas Iyer’s attempt to hit out of trouble ended up in his wicket. Iyer holed out to log on off Wanindu Hasaranga de Silva for 13.

The KKR batsmen to follow did the same in the face of tight bowling from RCB. Sunil Narine fell to Hasaranga de Silva in an attempt to hit a big shot, while Sheldon Jackson fell on the next ball for a golden duck, bowled on a wrong one from the Sri Lankan spinner.

Sam Billings fell next to Harshal Patel for 14, holing out to Virat Kohli. Andre Russell then looked to hit out each and every delivery to get some useful runs, but although he succeeded against Ahmed, he could not repeat the heroics against Patel. Russell edged it behind on a wide delivery from Patel for 18-ball 25 with 1 four and 3 sixes. Patel’s spell then stood out as he bagged 2 wickets for 0 runs in 2 overs.

Umesh Yadav gave an early breakthrough for KKR when he had RCB opener Anuj Rawat caught behind for a second-ball duck. Faf du Plessis then fell in the next over as he mistimed a glance to Rahane off Southee for 5.

Kohl played a couple of eye-catching drives off Yadav, but the pacer had his revenge in his second over when he had the batsman edge it behind for 12. At 17/3, RCB looked in danger, with an under-cooked middle-order. But Willey and Sherfane Rutherford showed great character to build a stand of 45 runs before the former was dismissed by Sunil Narine for 18.

Ahmed then joined Rutherford in the middle and showed some urgency to score a few big hits to bring the required run rate down. He cracked two sixes off an over from Russell and another one in Varun Chakravarthy’s over. But Chakravarthy had his revenge, getting Ahmed to be stumped for 20-ball 27 with 3 sixes.

When Rutherford fell to Southee for 28, the match hung in balance with RCB requiring 22 runs off 16 balls. After Hasaranga de Silva fell for 4, RCB required 18 off 13. Patel then turned the match around in the 19th over, hitting two fours off Venkatesh Iyer. With 7 runs needed from 6 balls for a win, Karthik sealed the match in RCB’s favour hitting a six and a four on the first two balls of the 20th over bowled by Russell.