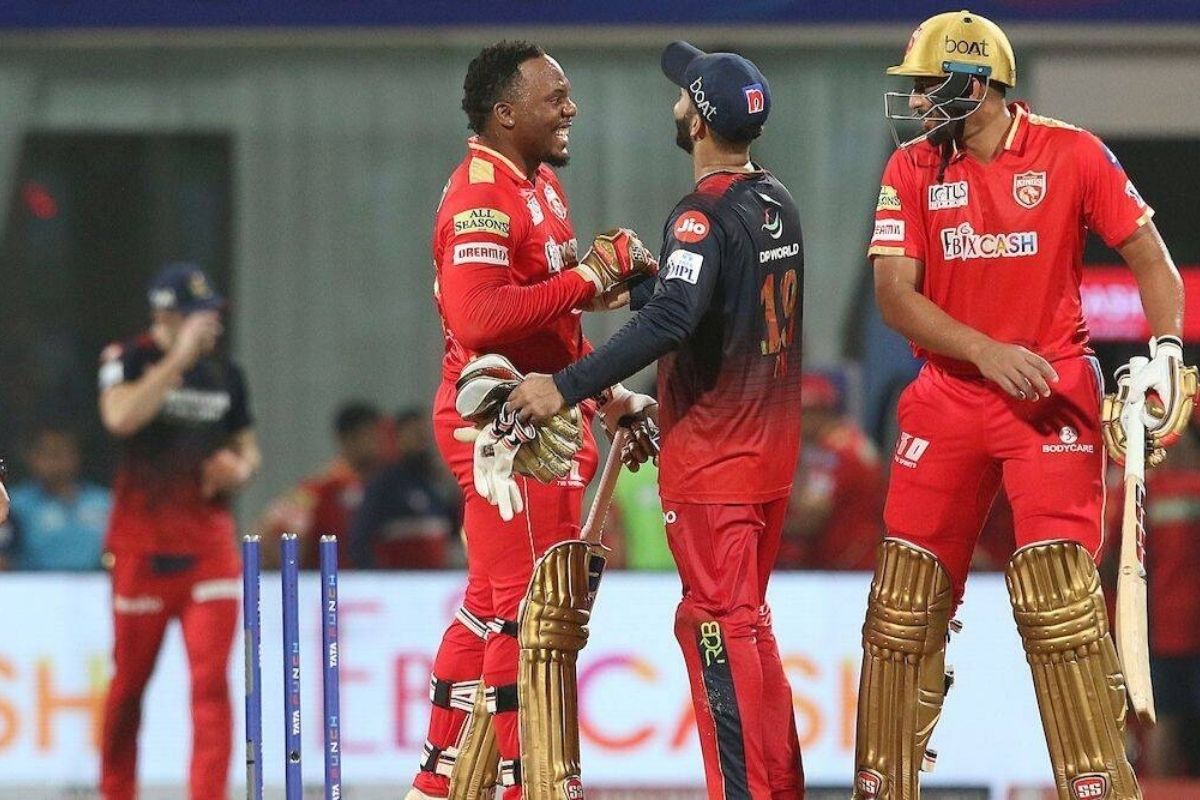 Punjab Kings was off to a winning start as they overhauled a target of 206 with 5 wickets and 6 balls to spare against RCB in IPL 2022 at DY Patil Stadium in Mumbai on March 27. The win overshadowed a brilliant knock of 88 from RCB captain Faf du Plessis. RCB’s poor fielding and extras cost them the match as they conceded 21 wides during their defence.

RCB was off to a steady start with new openers Faf du Plessis and Anuj Rawat putting up a stand of 50 runs in 7 overs. Skipper Faf struggled initially and was batting at about a 50 % strike rate. Meanwhile, young Rawat impressed with his strokeplay – the one dancing down the track to hoist a delivery from Sandeep Sharma over long-on for a six being the standout shot. Rawat fell for 21 with 2 fours and 1 six as he was bowled while trying a big shot against Rahul Chahar.

The wicket brought former captain Virat Kohli to join his current skipper Faf. Kohli broke the shackles, smashing a six over long-on off Harpreet Brar. RCB was 70/1 at the halfway mark and needed to raise the momentum urgently.

Faf finally broke the chains in the 12th over, hitting a six off Liam Livingstone over long-on. And then the carnage started in the 13th over, with Faf cracking two straight sixes off Odean Smith, with that over costing Punjab 23 runs. In the next over, Faf welcomed Brar for another two straight sixes before Kohli joined the fun hitting the third six of the over. The best part of this over was that Faf was able to guess the length of the ball even before the ball was bowled, and made changes accordingly to hit the ball out of the ground.

With his rhythm back, Faf cracked two sixes in the 16th overs bowled by Arshdeep Singh. Faf fell in the 18th over as Shahrukh Khan took a good diving catch at long-off on the bowling of Arshdeep. Faf made 88 off 57 balls with 3 fours and 7 sixes.

Chasing a big target of 206, Punjab Kings openers Shikhar Dhawan and Mayank Agarwal were off to a terrific start, posting 71 runs in 7.1 overs. Dhawan also benefited from a couple of missed chances – a catch and stumping – from RCB keeper Dinesh Karthik. Finally, RCB was able to break the partnership when Sri Lankan spinner Wanindu Hasaranga de Silva dismissed Agarwal on the first ball of his spell. Agarwal made 32 runs off 24 balls with 2 fours and 2 sixes.

Punjab Kings then sent Sri Lankan Bhanuka Rajapaksa to tackle his national teammate Hasaranga de Silva’s leg-break bowling. Rajapaksa took on his Sri Lankan mate, smashing a six over long on. Dhawan was also going strong at the other end, before smashing a cut straight to Anuj Rawat off Harshal Patel. Dhawan made 43 off 29 balls with 5 fours and 1 six.

At 139/3 in 13 overs, Punjab Kings looked favourite for the win before RCB bounced back through Mohammed Siraj who dismissed Rajapaksa for 43 and Raj Bawa for a golden duck on consecutive balls.

But Punjab was still favourite with Shahrukh Khan at the crease. However, Shahrukh struggled to get his timing right. It was Odean Smith who lifted the pressure off Shahrukh as the West Indian made merry of a dropped chance and struck three sixes off an over from Mohammed Siraj’s last over. Finally, Shahrukh struck a few big hits in the 19th over to seal the win. Smith made 25 not out of 8 balls with 1 four and 3 sixes. Shahrukh scored 24 not out of 20 balls.