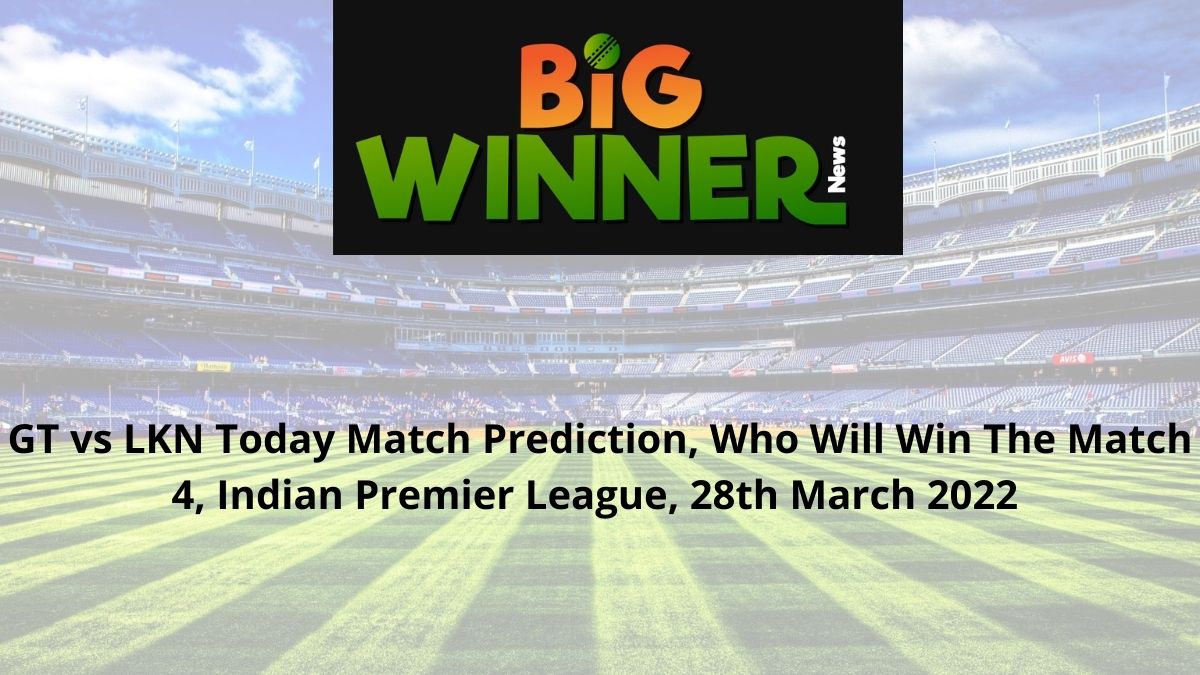 Our Experts bring you the finest today’s match prediction that you can trust. We are here for GT vs LKN, Today Match Prediction, Match 4, Indian Premier League, Online Cricket Betting Tips, which will provide every user with a clear picture of which team and in what aspect they can place their bets.

CVC Capitals win the bid for Gujarat Titans with a valuation of INR 5625 Crore. Team was quick to hire Ashish Nehra and Gary Kirsten for the coaching roles. They signed Hardik Pandya, Shubman Gill, and Rashid Khan before the mega-auction and named Hardik their captain for IPL 2022 season.

GT have plenty of middle-order and lower-order all-round players in their pool but lack opening batsmen this year. Jason Roy was expected to open with Shubman Gill but England star left the campaign citing big-bubble fatigue. Afghanistan wicket-keeper batsman Rahmanullah Gurbaz came in as his replacement but there is big question of who will play in number three and four position.

Lucknow Super Giants was bought up by Goenka Group for more than INR 7000 Crore, which makes them most-expensive IPL team ever. LSG have appointed Andy Flower and Gautam Gambhir as their head coach and mentor. They picked up KL Rahul, Ravi Bishnoi, and Marcos Stoinis before the mega auction and named former PBKS star KL Rahul as their leader.

LSG managed to sign big-named Avesh Khan, Quinton de Kock, Krunal Pandya, Manish Pandey, Deepak Hooda, and Jason Holder in the auction. They spend INR 7.50 Crore on English pacer Mark Wood in the auction, but he suffered an elbow injury last week, which ruled him out for entire IPL season. Australian speedster Andrew Tye came in as his replacement and is expected to start tonight.

Jason Holder and Marcos Stoinis will miss first three matches due to their national commitments. But Krishnappa Gowtham and Krunal Pandya are expected to fill-up all-rounder slots till then.

The temperature is expected to hover around 30°C on the match-day with 71% humidity and 9 km/h wind speed. There is 01% chance of precipitation during the game.

The famous Wankhede pitch was true it’s nature in the first match of IPL this season. Pace bowlers enjoyed powerplay overs with extra pace and swing and batsmen scored big-runs in the end. We can expect a little grass in the early stages so bowling first will be a crucial decision for the both teams.

Both new teams of IPL 2022 will be looking to kick off their journey with a win on Monday evening. Gujarat Titans have big names in form of Hardik Pandya and Rashid Khan whereas Lucknow Super Giants have KL Rahul and Quinton de Kock to start their inning. But LSG is missing their star all-rounders Marcos Stoinis and Jason Holder for the first three matches, and that makes them second favorites to win the opening clash tonight.

The star Indian opener was a key player in Kolkata Knight Riders’ successful campaign last year. He was the team’s highest run-scorer and scored a fifty in the final against Chennai Super Kings. Gill scored 478 runs in 17 matches with an average of 28.11 and a strike rate of 118.90.

The star Indian batsman and first-ever captain of Lucknow Super Giants were signed up for a whooping INR 17 crore. The opening wicket-keeper batsman was short of just 9 runs to win Orange Cap last year, despite playing 3 matches less than winner Ruturaj Gaikwad. KL Rahul scored 626 runs in just 13 matches with an average of 62.60 and a strike rate of 138.80.

One of the best t20 format spinners in the world will be the biggest weapon for Gujarat Titans this year. They picked up Rashid Khan before the mega-auction after being released by Sunrisers Hyderabad last year. Rashid Khan was the team’s highest wicket-taker with 18 wickets in 14 matches with an average of 20.83 and an economy rate of 6.96 last year.

It was a big surprise for Delhi Capitals fans when their franchise released Avesh Khan last year. The young pacer ranked 2nd in the Purple Cap chart last year and was a key element in the Delhi Capitals’ top finish in the table. Avesh Khan took 24 wickets in 16 matches with an average of 18.75 and an economy rate of 7.37 last season.