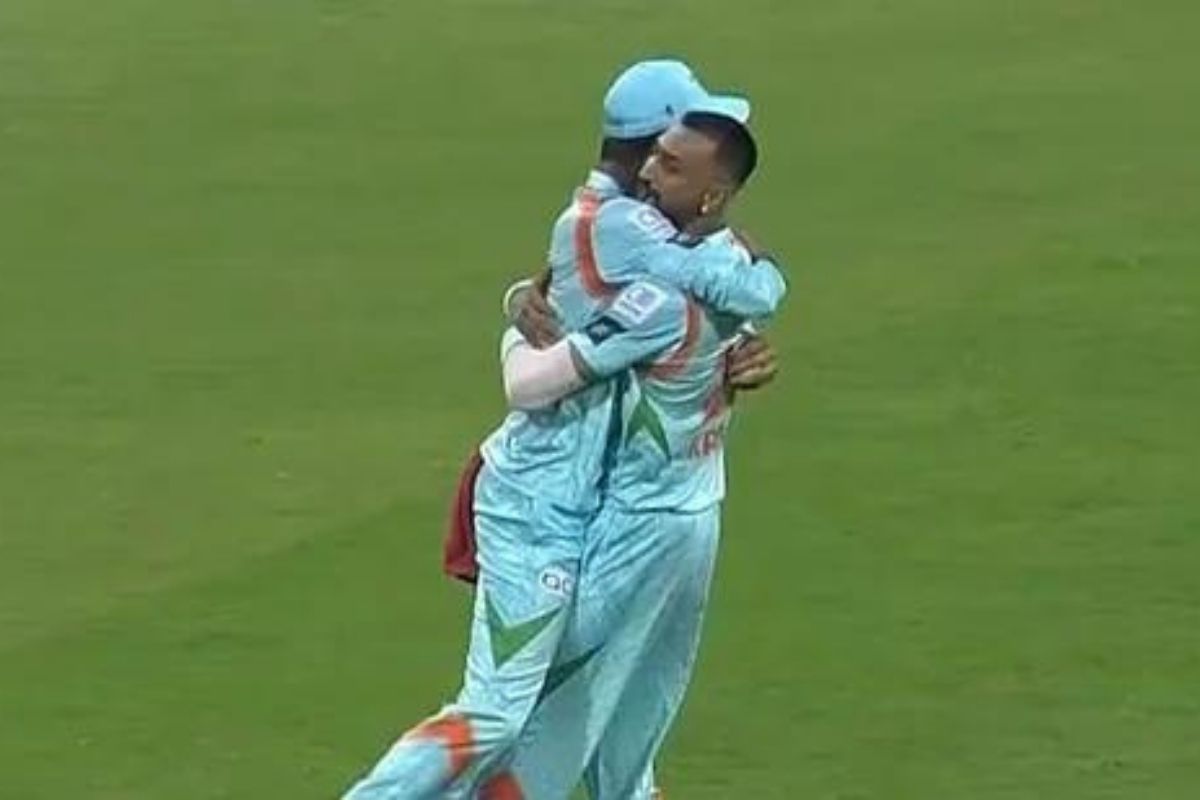 As the old saying goes, the Indian Premier League is a platform where your rivals become friends or vice versa. We have seen a lot of rivals getting to play together in the IPL. Earlier we have seen Harbhajan Singh and Andrew Symonds turning up for Mumbai Indians.

IPL witnessed one such incident today. In the match between Gujarat Titans and Lucknow Super Giants, Deepak Hooda and Krunal Pandya hugged out their difference. The duo had decided to bury the hatchet as they turned up to play for Lucknow today.

Pandya was the first player to applaud Hooda’s catch as he hugged him and then patted the all-rounder in the first over of the match.

It was the hot topic on social media considering how bad things were between the former Baroda teammates last year.

The video of the hug between the duo became viral on social media and many fans called it as ‘hug of the decade’.

The ugly spat between Pandya and Hooda

Earlier in 2021, Krunal Pandya and Deepak Hooda had an ugly spat ahead of that year’s Syed Mushtaq Ali Trophy. Hooda left the bio bubble and was subsequently suspended for the same. Hooda then wrote to the BCA board claiming that he was being “bullied” by Krunal which is why he left.

He then decided to end his career with Baroda and moved to Rajasthan this year. During that time, “It is a sad feeling to quit Baroda, for whom I have played throughout my career. But I spoke to my coaches, well-wishers, and thought this was the right decision for me,” Hooda had told Sportstar.

He also wrote an email to BCA Secretary Ajit Lele where he claimed that he was “demoralized, depressed and under pressure” by Krunal Pandya’s behavior.

Despite the fall of early wickets, Gujarat Titans had managed to impress on their debut as they went on to win by five wickets in the final over of the match.

The other debutants struggled to pick Mohammad Shami as the pacer ran through the batting order of Super Giants. His swing did all the talking as dismissed three of the Super Giants batters including the skipper KL Rahul who got out for a duck only for the second time in his IPL career.

When the team looked completely lost, Deepak Hooda stitched an excellent partnership with the teen Ayush Badoni. Both the all-rounders got to their respective half-century and with some help from Krunal Pandya in the end, the team reached 158 in their 20 overs. Hooda stitched an 87-run stand with 22-year-old Ayush Badoni, who made his IPL debut for Lucknow on Monday.

Hooda, who made his India debut recently against Sri Lanka, has been in fine form for a while now, and he had managed to carry that form here.

However, considering the conditions, it was a below-par score and Super Giants needed something special from their bowlers.

While Hardik Pandya looked good for his 33, he had to walk back after giving a straightforward catch to Manish Pandey as the big Pandya brother won the battle.

David Miller then joined hands with Rahul Tewatia. The latter found form at the right moment as he smashed five fours and a couple of sixes. When Miller was dismissed for 30, one would’ve thought that the Titans were still in the game but Abhinav Manohar had different ideas as he smashed three fours in the end to finish off the match. Mohammad Shami was awarded the player of the match for his 3/25.