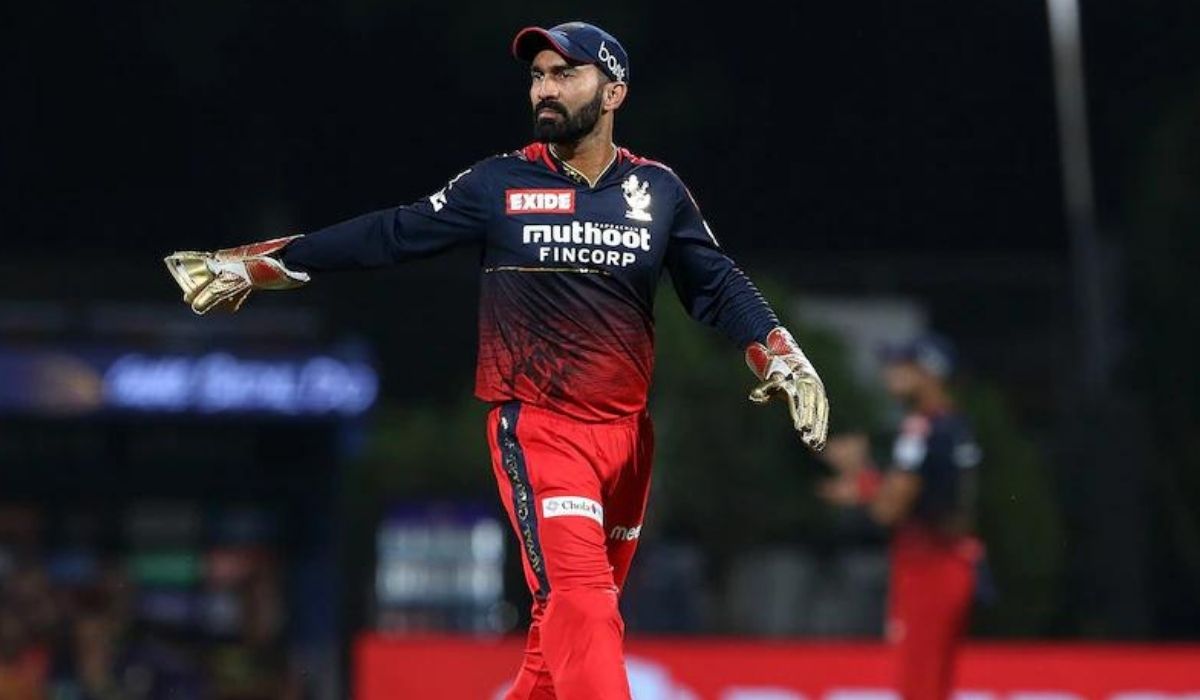 Dinesh Karthik played a brilliant knock of 66 not out off 34 balls to set RCB a match-winning total of 189/5 against Delhi Capitals at Wankhede Stadium on April 16. RCB then restricted Delhi to 173/7 to earn a 16-run win, and move to the third in the points table. RCB has now 4 wins out of 6 games. Delhi is placed 8th, with 2 wins in 5 games.

Asked to bat first, RCB was reduced to 92/5 in the 12th over before Dinesh Karthik combined with Shahbaz Ahmed to post a match-winning stand of unbeaten 97 runs. RCB had the worst start, losing opener Anuj Rawat for a golden duck, LBW off Shardul Thakur’s bowling. Skipper Faf du Plessis was the next to depart for 8 as he holed out in the deep to Axar Patel off Khaleed Ahmed’s bowling.

Virat Kohli then fell next for 12 as he was run-out by a direct throw from Lalit Yadav after he backed up too far. Meanwhile, Glenn Maxwell went ahead with his big hits and took a special liking for Kuldeep Yadav. He smacked the chinaman bowler for 2 fours and 2 sixes to take 23 runs off the over. Suyash Prabhudessai fell next for 6 looking for a scoop over the third man but mistimed it to be caught by Kuldeep off Patel’s bowling.

Shahbaz and Karthik then steadied the innings, first dealing in ones and two and punishing the bad balls before exploding in the death overs. Although Karthik did the bulk of the scoring, Shahbaz didn’t shy from hitting the big ones. Karthik got stuck in the 18th over bowled by Mustafizur Rahman, cracking 4, 4, 4, 6, 6, 4 to take 28 runs off the over. RCB posted 74 runs in the last 5 overs, taking the score to 189/5. Karthik made 66 not out off 34 balls with 5 fours and 5 sixes. Shahbaz made 21-ball 32 not out with 3 fours and 1 six.

Delhi was off to a flying start, with openers David Warner and Prithvi Shaw posting a stand of 50 runs in just 4.4 overs. For a change, Warner donned the aggressive nature, while Shaw was the passive partner in this stand. Shaw fell for 13-ball 16, giving a catch to Rawat off Mohammed Siraj’s bowling for 16.

Mitchell Marsh, who joined Warner in the middle and playing his first match in IPL 2022, looked rusty and struggled to get going. Marsh played at a strike rate of just over 50%, putting pressure on Warner to go for the glory shots. Warner perished LBW looking for an ambitious shot of Wanindu Hasaranga de Silva. Warner made 38-ball 66 with 4 fours and 5 sixes.

Marsh was then run-out at the non-strikers’ end when a drive from Rishabh Pant brushed Hasaranga de Silva’s hand and hit the stumps, while the Aussie was backing up too far. Rovman Powell then fell in the next over, caught behind off Josh Hazlewood’s over for a golden duck. In the same over, Lalit fell for 1 to put pressure back on Delhi.

Captain Pant tried his best to wrest the momentum, but after playing a 17-ball 34, he mistimed a lofted drive straight to Virat Kohli who pulled off a blinder with one hand. Thakur played a few good sixes, while Patel fought till the end, but RCB was not to be denied today. Hazlewood took 3/28.