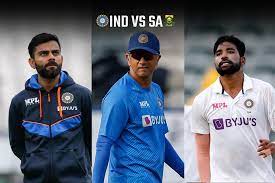 After missing the Second Match of the Freedom Test Series, the Indian Skipper Virat Kohli is set to make a comeback in the third match in Cape Town from January 11-15. Kohli had to skip the second match due to spasms in his back.

Head Coach of the Indian Cricket Team, Rahul Dravid, shared this news while addressing a virtual press conference post the match. Given the details, he said Kohli is showing significant improvement. In a day or two, he should be fit on all accounts. Kohli also had the chance to practise a little and test himself. In the four days left before the third match, Kohli would be practising in the nets and be ready to take on the South African battle.

In Kohli’s absence, K L Rahul led the Indian squad. The Indian Team, though put up a fierce challenge, lost the match by seven wickets. For the South Africans, their captain Dean Elgar’s unbeaten 96 helped them register their first victory of the series. The three-match series is now levelled at 1-1.

Talking about his team’s performance in the second match, the head coach said it was a difficult pitch to bat for both sides. The cracks started to show up within hours of rollers clearing them. Yet, the hosts were able to chase the target of 240 runs at the Wanderers Stadium.

Dravid said the team should have built upon the opportunities offered and sustained the partnerships longer. Had the team been able to add up another 50-60 runs, it would have made an enormous difference. He also dismissed the allegations of being complacent after the victory in the first match. He said his team set a decent target for the South Africans, despite the conditions. He said the Proteas’ fourth innings was probably their best in the series.

He reposed faith in his squad, saying players like Hanuman Vihari and Shreyas Iyer show excellent cricketing skills. They can be relied upon when the time comes. With Kohli’s return in the third match, the Indian Team will try to win both the match and their first test series in South Africa.