Home » Cricket » I fancied my chances: Hardik Pandya on his match winning knock 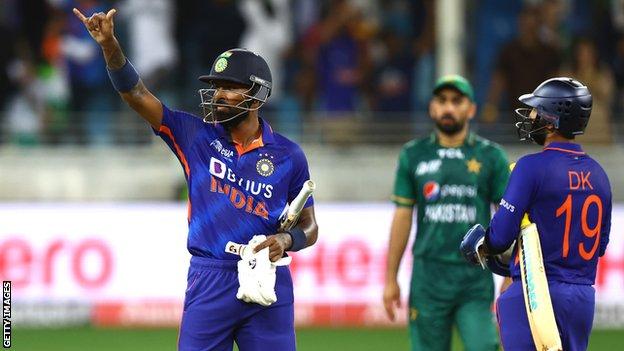 Hardik Pandya helped India to cross the line against Pakistan in their opening match of Asia Cup 2022. The defending champions did well to restrict the Pakistan batting attack for a below-par score but Indian batters struggled a bit early in the innings. It was Hardik Pandya and Ravindra Jadeja who took the team over the finish line to complete the revenge against their arch-rivals.

Pandya paced his innings well and took the game until the last only to finish it off with a six.

Talking about his plans, Pandya said that he always knew whom to target.

Earlier, Pandya also played a major role with the ball and grabbed three wickets. His wicket of Mohammad Rizwan shifted the momentum towards the Indian team. Pandya revealed that his plans are simple when it comes to bowling.

“Hard lengths are my strength”

“In bowling my plans are simple. It’s important to assess conditions, and situations and use the weapons – hard lengths are my strength. I use it wisely, put doubt in the batsmen, and ask them to play the wrong shots.”

He added that over the years, he has grown well as the batter and understood that he if stays calm, he could pull things off with ease.

“In batting over the years I have understood that if I stay calmer, I can execute my plans. Those 50-50 chances I take, if I stay calm, I can do it my way,” he said.

India bowled well to restrict Pakistan to just 147 on a good batting track. Rohit Sharma opted to bat first and Bhuvneshwar Kumar did his job. The pacer removed four batters and he was well supported by Hardik Pandya who grabbed three wickets.

In return, the debutant Naseem Shah removed KL Rahul early. Rohit Sharma and Virat Kohli then tried to build a partnership but they got out within ten overs. India found themselves at 89/4 in the 15 over when Hardik Pandya walked in to join Ravindra Jadeja. The duo added a half-century partnership before Jadeja got out in the final over. Pandya then completed the chase with a massive six and took India over the line by 5 wickets.