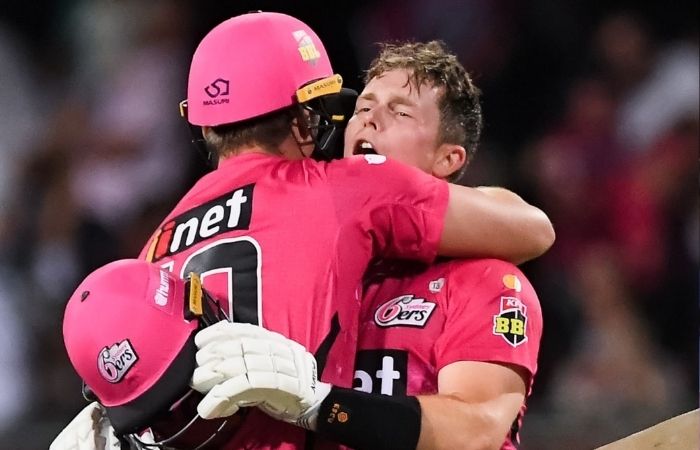 The Sydney Sixers have booked a spot in the final of the Big Bash League (BBL) 2022 where they will meet Perth Scorchers for the fifth time in eleven editions of the BBL.

Sixers sealed their spot with a controversial last-ball thriller over the Adelaide Strikers at the SCG on Wednesday night.

Sixers had earlier sent injured Jordan Silk to bat alongside Hayden Kerr. The team needed 12 off the final over to surpass the Strikers’ 4-167. The target later got reduced to 2 off 1. Right before the final delivery, the team had decided to retire injured Silk out and send fit Jay Lenton, in case, the team had to run a couple of runs for the victory.

“They’re going to retire him hurt. I do not know about this… I’m just not really sure about this,” Adam Gilchrist said on Fox Cricket before confirming that it was well within the law of cricket, another loophole in the law. In the end, a misfield sent the ball to the boundary, helping Sixers to cross the total by four wickets.

While this loophole in the law made the headlines, some other factors and blunders had influenced the result of this epic clash.

The umpiring standards in the Big Bash League have been below par this season. Many big stars have even taken to social media to criticize the umpires. On Wednesday night, umpires had three controversial calls that certainly had influenced the result of this close contest.

The first call came in the 19th over of Strikers’ innings. The Sixers pacer Sean Abbott bowled a delivery that was way outside the mark, but umpire Sam Nogaski had decided against it, leaving everyone, including the commentators shocked.

The other incidents took place during the second innings when Strikers were bowling. Hayden Kerr was at the crease when Peter Siddle was bowling. The Strikers skipper saw Kerr moving outside off to give himself room to play a scoop and followed him. The ball went well outside the line but was within the reach of the Sixers all-rounder. However, the umpire called it wide.

“I’m not sure you do give that (a wide), it almost hit him,” Gilchrist said on air.

This resulted in an extra run and an extra delivery which Sean Abbott smacked for a boundary.

In the following over, Henry Thornton bowled a short delivery that was just over the head of Sean Abbott. It could’ve gone either way but the umpire went on to give a wide.

“That’s tight. It could have gone either way,” Waugh said. If at least one of them went Strikers’ way, the result could’ve ended in their favor.

While the shocking calls from umpires could’ve changed the course of the game, Strikers had bigger problems—Their fielding.

Hayden Kerr, who has promoted up the order to open the innings, danced down the pitch in the very first delivery of the Sixers innings. Matt Short adjusted the line a bit and defeated Kerr. Unfortunately, keeper Alex Carey too was beaten by the delivery as Strikers missed an easy stumping opportunity. It did prove to be a big mistake as Kerr went on to score an unbeaten 98 from just 58 deliveries.

This wasn’t the only life the all-rounder got today. He was batting at 16 when Matt Renshaw dropped a simple high catch.

Ironically, Renshaw, who was mic’d up for the match, spoke about the importance of dismissing Kerr early in the innings and then went on to drop an easy one.

When Kerr reached 16, he smacked a delivery towards the square leg boundary. The ball fell right into the hands of Matt Renshaw but the latter couldn’t hold on to it. The catch was way too easier for the Australian star’s standards.

Apart from catches, there were multiple occasions where Strikers fielders allowed Sixers to steal an extra run. Even in the final delivery of the game, there was a misfield that led the Sixers to sneak past Strikers.

When the team needed two from the final ball, Kerr flicked a length delivery towards midwicket. There was a definite one but two was a close call.

If the fielder had collected the delivery clearly and got it back to either of the end, there could’ve been a runout and the match would’ve entered the super over. Instead, he fumbled the ball through his hands as it reached the rope for a boundary.