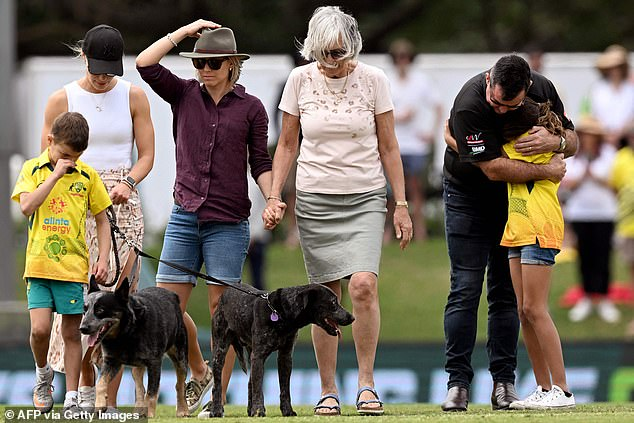 Emotions took over at Townsville on Sunday afternoon as the family of late cricket legend Andrew Symonds paid tribute to the cricketer.

The family turned up with Symonds’ beloved blue cattle dogs before the start of Australia’s match against Zimbabwe.

Andrew Symonds’ children Chloe, 10, and Billy, 8, joined the Australian team for the match, standing next to skipper Aaron Finch for a touching minute’s silence.

The kids also were seen playing the role of best hydration officers during the break.

They also further took part in the further tribute to the beloved cricketer alongside their mother and Symonds’ sister Louise among others.

Apart from the family, Symonds’ best friend and his Australian teammate Jimmy Maher also took part in the ceremony. He was seen comforting Symonds’ daughter as they left the field after the ceremony.

Both teams formed a guard of honour for the grieving party as they walked out on the field. They placed Symonds’ baggy green, cricket bat along with some of his favourite things.

The applause kept getting better with time and many fans were seen wiping tears during the tribute.

Symonds’ Test number, 388, along with his nickname, Roy, were also emblazoned across the grass.

He was box office with bat and in the field: Aaron Finch

Prior to the tribute, Australian captain Aaron Finch spoke to Fox Sports about the impact of Andrew Symonds. He said that the legend was remarkable and was a box office with the bat and in the field.

‘What he did as a player was remarkable. He was someone who put bums on seats, he was box office with bat and in the field,’ Aaron Finch said on the Fox Sports broadcast before the game.

‘[It’s been] a really sad time obviously for Australian cricket over the last little while. It’ll be nice to have some tributes and his family here.

He also mentioned that Symonds’ knowledge about the game was second to none.

‘For someone who was so laidback, his depth of knowledge of cricket and players was second to none. I think the larrikin tag was there, but the deep knowledge of the game was outstanding as well,’ said Finch.

Australian cricket great Andrew Symonds died in a single-car crash at the age of 46 on May 14.

Andrew Symonds’ wife spoke to the media after the legend’s demise and said that they are all still in shock.

‘We are still in shock – I’m just thinking of the two kids,’ Laura Vidmar told News Corp in May.

‘He was just such a big person and there was so much of him in his kids.’

Symonds played 26 Tests, 198 ODIs and 14 T20Is for Australia, which included his central role in winning the 2003 World Cup in South Africa.