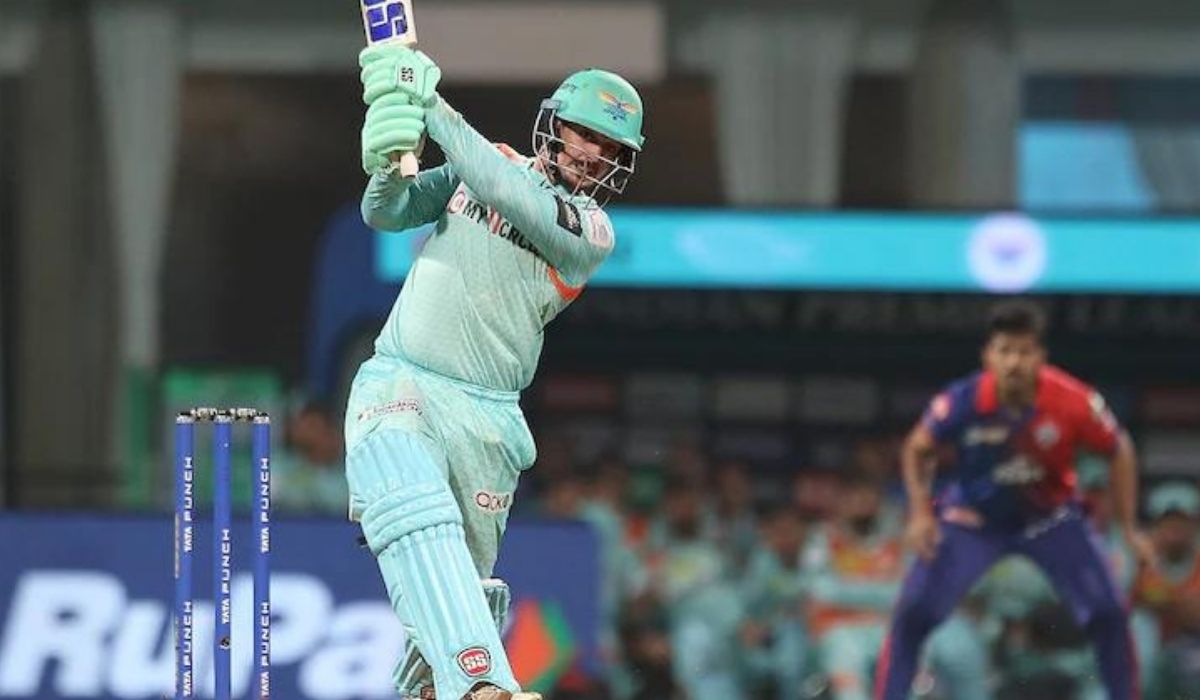 The stylish left-handed South African wicketkeeper-batsman played one of the best knocks in IPL 2022 so far. With 3 centuries by Jos Buttler and 2 by KL Rahul, de Kock showed his class during yesterday’s match against Kolkata Knight Riders played at DY Patil Stadium, Navi Mumbai.

Before this match, de Kock did not perform according to expectations. Lucknow Super Giants captain KL Rahul won the toss and decided to bat first. It was a cautious start by de Kock and KL Rahul in the initial stages as both openers put on 44 runs in the first six overs. The opener was dropped by Abhijeet Tomar on 12.

Quinton de Kock was bought by Lucknow Super Giants for 6.75 Crore during the IPL 2022 auction. He has provided decent starts for the newly appointed franchise during this year’s prestigious event. At the end of league stage matches, de Kock has been the backbone scoring 502 runs from 14 matches (14 innings) with 3 half-centuries and 1 century. Lucknow Super Giants became the 2nd team after Gujarat Titans to qualify for the playoffs stage and is currently at number 2 spot.

After the drop chance, de Kock showed his class making life tough for KKR bowlers. He completed fifty off 36 balls. On other hand, KL Rahul also looked impressive keeping the scoreboard ticking. De Kock looked innovative against Varun Chakvarthy putting him under pressure. The left-handed South African wicketkeeper then upped the ante reaching century off 59 balls and kept the momentum going for LSG. De Kock smashed hattrick of sixes in the 19th over not allowing KKR bowlers to settle. He continued his assault in the final over smashing 4 successive boundaries helping Lucknow Super Giants post 210 for 0. De Kock remained not out on 140 off 70 balls with 10 fours and 10 sixes at a strike rate of 200.

De Kock and KL Rahul registered the highest ever opening partnership in IPL history. Lucknow Super Giants won a last ball thriller thanks to Marcus Stoinis getting the wicket of Rinku Singh due to a sensational one-handed catch by Evin Lewis and then shattering Umesh Yadav’s stumps.

De Kock continued his brilliance behind the stumps with a lovely one-handed catch to dismiss Venetaksh Iyer and then simple stumping to get rid of Sam Billings. For his 140 off 70 balls, de Kock was named the man of the match award.

De Kock played a key role in providing good starts to Mumbai Indians. He made his IPL debut for Delhi Daredevils in 2014 and played till 2017. During 2018, de Kock was bought by Royal Challengers Bangalore and scored just 1 half-century.

He continued his superb performance in the 2020 edition with 503 runs from 16 matches (16 innings) including 4 half-centuries. De Kock showed his class and played a key role in helping Mumbai Indians winning back-to-back titles in 2019 and 2020.

During yesterday’s match against KKR, de Kock posted the highest score by a wicketkeeper in IPL history. He also recorded the third highest induvial score during IPL since its inception in 2008.