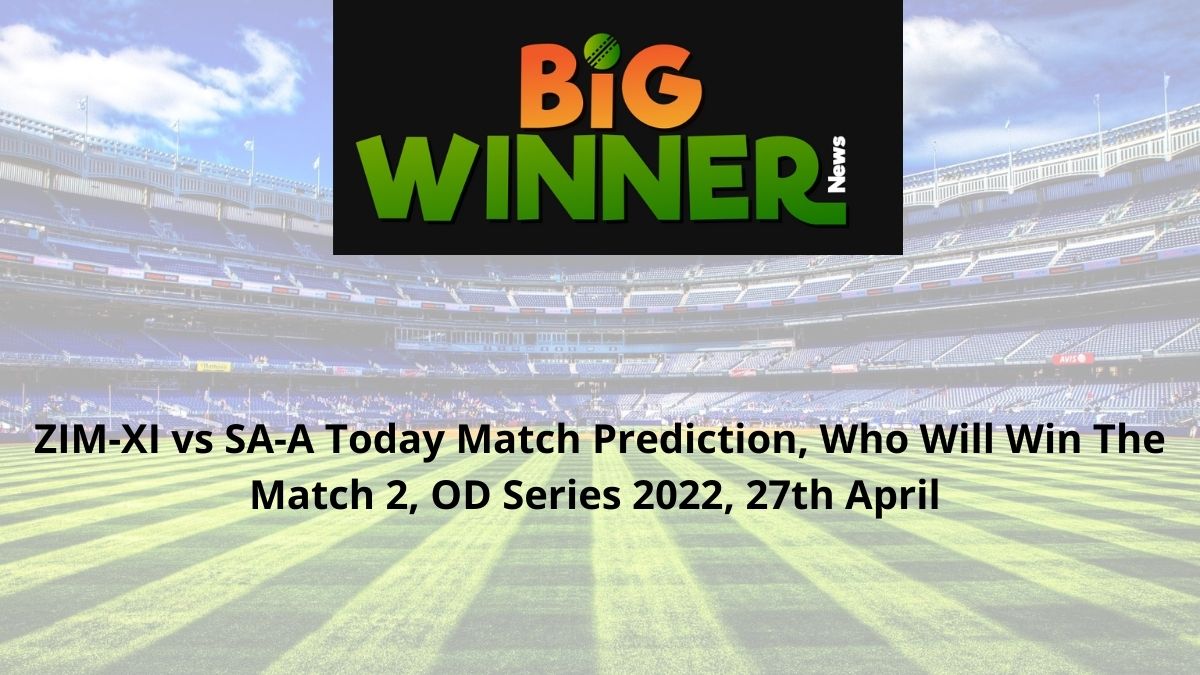 Our Experts bring you the finest today’s match prediction that you can trust. We are here for ZIM-XI vs SA-A Today Match Prediction, Match 2, OD Series, Online Cricket Betting Tips, which will provide every user with a clear picture of which team and in what aspect they can place their bets.

Zimbabwe rank 13th in ICC ODI best teams chart but this is unofficial one-day series so the result will not affect their poor rankings. Zimbabwe’s side is playing to best eleven possible and impressed in the first match with a surprise win by 5 runs. South Africa A side scored 273 while batting first, which a big target of bowling-favored Harare pitch. Zimbabwe chased down this target with a thrilling finish on the last ball. Rain stopped the play several times and according to the Duckworth-Lewis-Stern method, they won the first match by 5 runs.

South Africa A suffered a shocking defeat in the first match but we can’t blame their performance as rain played a crucial role in their loss. Star players Heinrich Klaasen and Andile Phehlukwayo scored big fifties in the first match and will continue their form in the second match to compete for the national team. They beat Zimbabwe in an unofficial one-day tour by 3-1 and are expected to win next two matches to seal this series a well.

Top Batsmen of South Africa A from last match

Top Bowlers of South Africa A from last match

The temperature is expected to hover around 18°C on the match-day with 72% humidity and 11 km/h wind speed. There are 25% chances of precipitation during the game.

Harare pitch is excellent for the ballers and both pacers and spinners have dominated this pitch in the past. But the first match was well balanced for both batters and bowlers. Rain played a big role in the last match’s result and once again there is strong prediction for the light rain.

Who will win the match, Today’s Match Prediction:

The star all-rounder and team’s captain is leading from the front for Zimbabwe lately and was excellent in the first match as well. He took 1 wicket with very good economy rate and then scored 59 runs off just 50 balls to guide his team to a surprise win. Sikandar Raza has scored 3086 runs in 111 one-day international matches with an average of 34.28 and a strike rate of 84.13.

The star wicket-keeper batsman continues his domestic form into international fixture with an excellent fifty in the first match. He scored 58 runs off 51 balls while batting at number 5 position and once again tipped as best batsman on Wednesday clash. He has scored 613 runs 23 international one-day matches with an average of 32.26 and a strike rate of 93.73.

The experienced Zimbabwe all-rounder put an excellent performance in the first match. He took 4 wickets, including both openers and in-form star Andile Phehlukwayo. Tiripano has taken 6 wickets in his last 3 matches and is expected to end this series as highest wickets-taker for the hosts. He has taken 35 wickets in 36 international one-day matches with an average of 39.94 and an economy rate of 5.81.

The 28-year-old right-arm pacer is in excellent form lately and was on the show once again in the first match. Williams took 2 wickets and gave away just 29 runs in his 10 overs, including one maiden. Lizaad Williams has taken 71 wickets in 54 unofficial one-day matches with an average of 30.07 and an economy rate of 5.36.