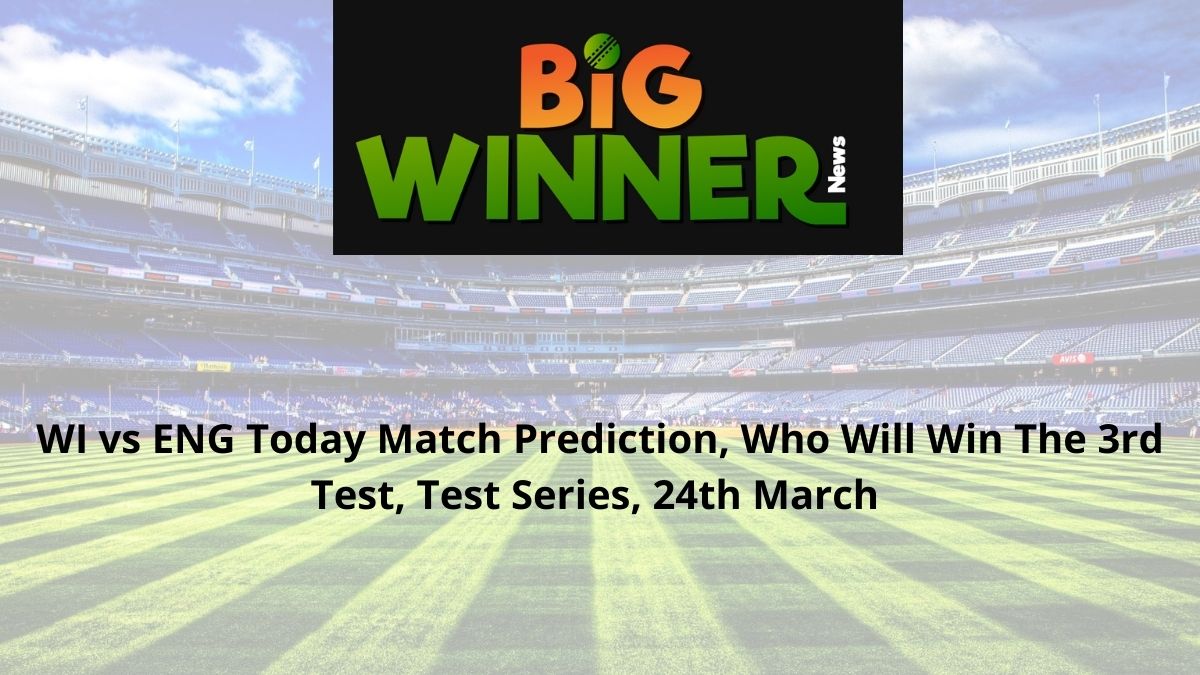 Our Experts bring you the finest today’s match prediction that you can trust. We are here for WI vs ENG Today Today Match Prediction, Test 3, Test Series, Online Cricket Betting Tips, which will provide every user with a clear picture of which team and in what aspect they can place their bets.

West Indies side are playing above expectations in this series and managed to draw first two match, against the draw. They rank 8th in the ICC test rankings and World Test Championship table with just 1 win in 6 matches this year. Kraigg Brathwaite, Jermaine Blackwood, and Veerasammy Permaul have been consistent performers in this series but need more efforts from others to win this third and final test match.

English team are suffering a big downfall in test cricket lately and their performance in this series is far from the best. They have lost last three test series and now they rank last in the WTC table with just 1 win in last 11 matches. Ollie Robinson has suffered a minor injury and has been ruled out of this match but star all-rounder Chris Woakes is fit to play.

The temperature is expected to hover around 28°C on the match-day with 76% humidity and 32 km/h wind speed. There are 32% chances of precipitation during the game.

Grenada’s pitch is excellent for the batters in the 3 games played but bowlers also got some help in last two days. Pitch is expected to be flat with less grass once again and little rain is predicted tomorrow.

England are expected to draw the third test match against West Indies.

West Indies side have surprised everyone with impressive performances in this series. England were favorites to win this series with dominating wins but first two matches were drawn. Flat pitches played a big part in the first two draws with only one bowler managed to take more than 8 wickets in first two matches and Grenada pitch is expected to be same and we might expect another draw in the last match of this series.

West Indies skipper is leading most-runs chart in this series after another big-inning in the last match. He scored 160 runs in the first inning and remained not-out on 56 runs in the second inning. Brathwaite has scored 304 runs in 2 matches with an average of 101.33 and a strike rate of 36.84.

English captain continues to score big runs and leading his side single-handedly for past few years. He has scored centuries in both matches and ranks 2nd in most-runs chart, just 20 runs behind opponent’s leader Kraigg Brathwaite. Root has scored 284 runs in 2 matches with an average of 71.00 and a strike rate of 52.20 in this series.

The experienced right-arm pacer is one of the few bowlers with consistently good performances for the hosts. Roach took 3 wickets in the last match as the pitch was completely in the favour of batsmen. Roach has taken 7 wickets in this series with an average of 34.00 and an economy rate of 3.17.

The 30-year-old left arm spinner has been a key bowler for the visitors for last few years. He took 6 wickets in the last match, 3 in each innings, and bowled almost 70 overs in the first inning. He is leading most-wickets chart in this series with 11 wickets in two matches with an average of 26.36 and an economy rate of 1.72.