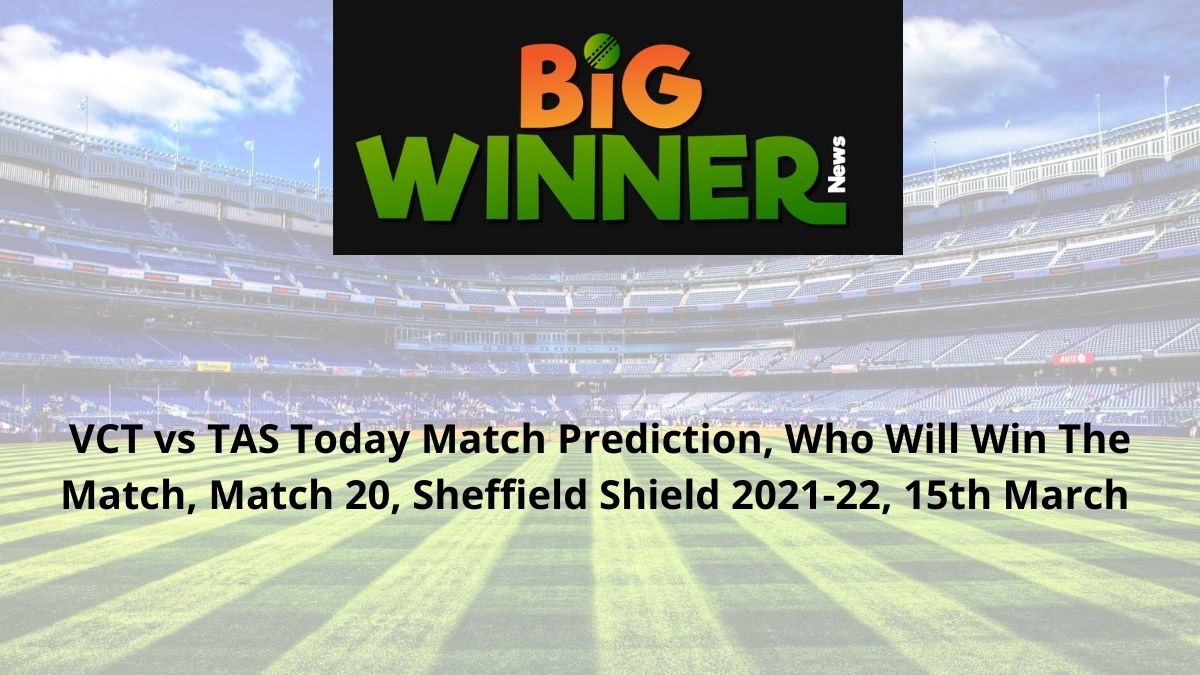 Our Experts bring you the finest today’s match prediction that you can trust. We are here for VCT vs TAS Today Match Prediction, Match 20, Sheffield Shield, Online Cricket Betting Tips, which will provide every user with a clear picture of which team and in what aspect they can place their bets.

Victoria is one of the most successful teams in Sheffield Shield history and dominated this tournament with 4 trophies in the last 7 years. They are yet to taste a defeat this year but have won just 2 out of 5 matches so far. Race for the top two is a realistic target for them but their current form says otherwise. They are placed in 3rd position with 21.9 points from the opening 5 matches, 4.4 points behind leaders Queensland.

Tasmania are playing above expectations level this season and are in contention to reach the finals of Sheffield Shield this year. They remain least successful team in the tournament’s history but it’s a good start to change those numbers from now on. They are placed in 4th position with 21.21 points from the 6 matches, just a point behind 2nd placed Western Australia. A win against struggling Victoria will guide them to the 2nd position.

The temperature is expected to hover around 21°C on the match-day with 83% humidity and 11 km/h wind speed. There are 58% chances of precipitation during the game.

Only one match played on Junction Oval pitch this season and it resulted in a draw. Both teams managed to scored average 350 runs on this batting-friendly pitch but bowlers also received some swing in last two days. Rain is expected to play a crucial part on this pitch in next four days so it will be a very tough for bowlers to gain anything out of it.

Tasmania are expected to win the Sheffield Shield match against Victoria

Victoria is going through a tough patch lately with a single win in the last five matches and Tasmania has won all of their last three matches. Their current form makes Tasmania favorites to win this match as Victoria has won just once in the last five meetings. In the reverse fixture, both teams played an exciting draw match last week.

The in-form opening batsman and Victoria’s captain is leading by example this year with another big fifty against Queensland in the last match. He finished last season as the leading run-scorer and once again tops the most-runs chart with 541 runs in 5 matches with an average of 60.11 and a strike rate of 45.23.

The 24-year-old middle-order batsman has been excellent in the Sheffield Shield tournament with 3 fifties and a century. He is leading the most-runs chart for Tasmania with 503 runs in 6 matches with an average of 45.72 and a strike rate of 41.81. He ranks 4th in the most-runs chart this season, just 38 behind leading run-scorer Peter Handscomb.

The experienced pacer ranks 6th in the most-wickets chart in Sheffield Shield this year despite playing just 4 matches. One big spell in this match with boost up his chances to finish this season at top. Boland has taken 21 wickets in just 4 matches with an average of 15.66 and an economy rate of 2.02.

The 37-year-old Australian veteran pacer is enjoying a great season in every format of the game. Former international star is leading most-wickets chart for Tasmania with 16 wickets in 5 matches with an average of 21.50 and an economy rate of 2.14.