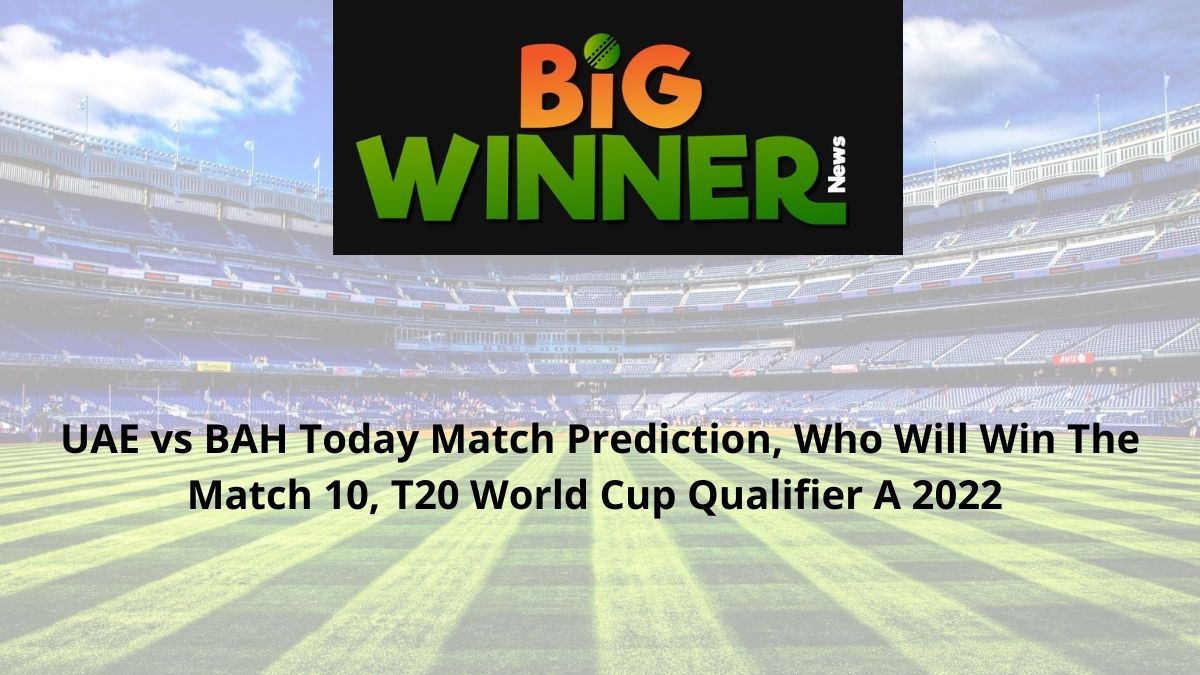 Our Experts bring you the finest today’s match prediction that you can trust. We are here for UAE vs BAH, Today Match Prediction, Match 10, T20 World Cup Qualifier 2022, Online Cricket Betting Tips, which will provide every user with a clear picture of which team and in what aspect they can place their bets.

United Arab Emirates have shown their potential as regular t20 team in last few months. They have lost just once in the last 5 matches and placed top of the table with 2 wins in 2 matches in the T20 World Cup qualifiers. They are expected to win this last fixture with another all-round and dominating display on Monday.

Bahrain are new-comers in T20 cricket with 31 rank in ICC T20 team’s chart and still adopting international challenge. They showed their fast growth in the first two matches and dominated Germany clash in the first match. They struggled against Ireland in the last match which was not a surprise but placed in 2nd position ahead of them in the Group B table.

The temperature is expected to hover around 27°C on the match-day with 36% humidity and 11 km/h wind speed. There is 1% chance of precipitation during the game.

Al Amerat’s pitch on turf B is similar to main turf A as bowlers dominated both the innings on this pitch so far. Pitch is very slow and the ball starts moving from the start. The average score on this pitch is less than 110 and only one team has crossed 150 runs marks in 7 t20 matches here.

United Arab Emirates are expected to win against Bahrain.

United Arab Emirates are favorites to win the qualifiers ahead of the likes of Ireland and Nepal. They are excellent in last few matches and have won first two matches already. They are leading odd with 1 to 10 against Bahrain and are expected to win this clash with an ease. Bahrain showed their potential in the first two matches with a win against Germany and a narrow loss against Ireland. But they stand no chance against the emerging UAE on Modnay.

The Indian-born wicket-keeper batsman was sensational against Ireland with 97 not out runs knock and scored 40 runs against Germany in the last match. Aravind is leading most-runs charts in the qualifiers with 137 runs in just 2 matches with an average of 137.99 and a strike rate of 142.70 so far.

The 40-year-old Bahrain captain is leading by example with two good performances in the qualifiers. Sarfaraz Ali remains only player to scored fifty for his side in the first two matches with his blistering 69 runs knock against Germany in the first match. He has scored 84 runs in 2 matches with an average of 84.00 and a strike rate of 158.49.

The experienced right-arm off-spinner has taken 2 wickets each in first two matches and has been economical in the qualifiers. Mustafa has taken 4 wickets in the 2 matches with an average of 10.00 and an economy rate of just 5.71 so far.

The right-handed leg-spinner break the news with 5 wickets against Germany giving just 5 runs in the first match. He also took 2 important wickets against Ireland in the last match. He is leading the most-wickets charts in the qualifiers with 7 wickets in just 2 matches with an average of 3.00 and an economy rate of just 3.70 so far.