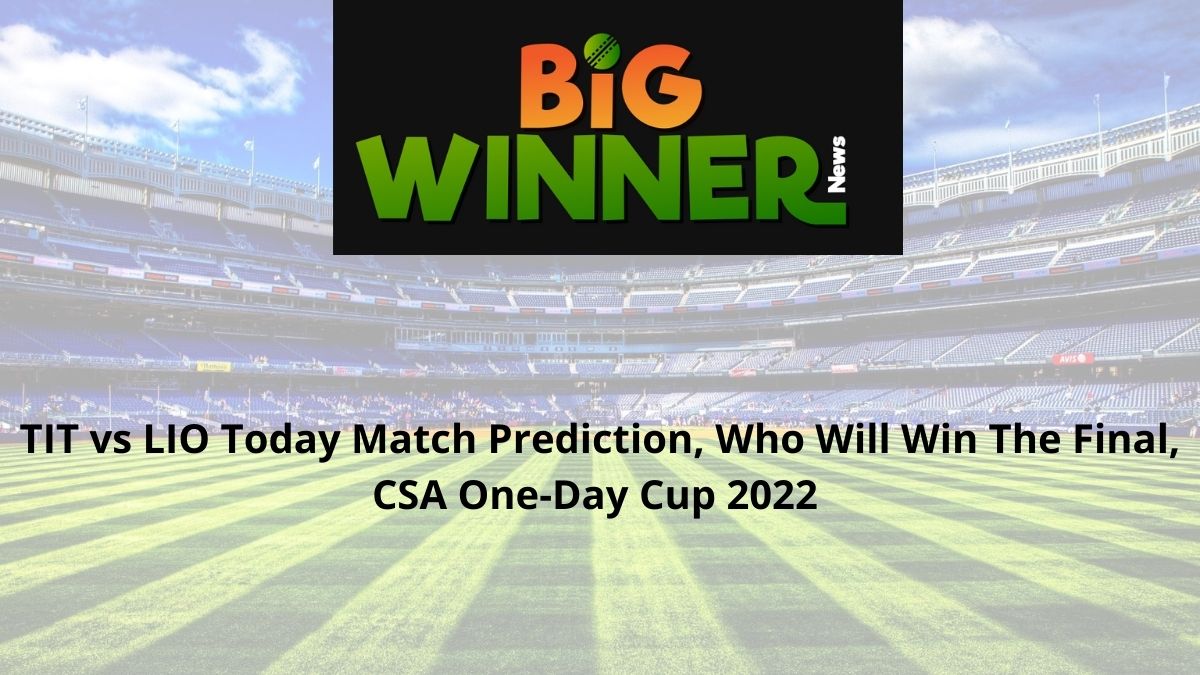 Our Experts bring you the finest today’s match prediction that you can trust. We are here for TIT vs LIO, Today Match Prediction, Match Final, CSA One-Day Cup 2022, Online Cricket Betting Tips, which will provide every user with a clear picture of which team and in what aspect they can place their bets.

Titans have dominated domestic cricket in South Africa this season and are favorites to win CSA One-Day Cup on Wednesday. They reached the finals of T20 cup as well but lost to Boland. Titans have scored big totals in this tournament, 3 times 300 plus runs, and one 400 plus run total.

They won the first 5 matches in a row but lost against Lions in the last match (the last match against Western Province cancelled due to rain) by just 1 wicket in the low-scoring clash. Their recent record against Lions is very poor but they are clear favorites to lift the trophy at then of this finals clash.

Lions lost first 2 of 3 matches in this tournament but made a comeback with 3 wins in last 3 matches to secure the birth in the finals. They finished this season in 2nd position with 9 points from the 7 matches. Lions beat Tians by 1 wicket in their last match and have won 4 of their last 5 matches against today’s opponents.

The temperature is expected to hover around 24°C on the match day with 41% humidity and 16 km/h wind speed. There is 1% chance of precipitation during the game.

Centurion pitch is excellent for both batters and bowlers in the past but pacers have dominated this tournament. More than three-fourths of wickets came from the pacers and the average score on this pitch is below 230 runs.

Both Titans and Lions have shown excellent consistency in this entire tournament and deserve this spot in the finals. They faced each other in the last match of the group stage fixtures, where the Titans suffered their first defeat in this tournament. It can be a little preview for tomorrow’s clash. But Titans have shown great consistency in the entire tournament and are favorites to win this final clash on Wednesday.

The experienced wicket-keeper batsman is set to finish this tournament as the highest run-scorer if he scores 27 or more runs in the finals. Klaasen has scored 2 centuries in this tournament and is in great form for the Titans so far. He has scored 414 runs in 7 matches with an average of 69.00 and a strike rate of 114.04.

The middle-order South African batsman is one of the few players who have scored runs consistently this season. He was the team’s highest scorer against the Titans in the last match with 44 runs as well. M Van Buuren is leading the most-runs chart for Lions with 169 runs in 6 matches with an average of 33.80 and a strike rate of 80.47 so far.

The 25-year-old all-rounder, naturally a top-order batsman, has impressed everyone with bat and ball this season. He remains the only bowler to reach 10 wickets feat for the Titans in this tournament. The brand has taken 10 wickets in 5 matches with an average of 15.50 and an economy rate of 4.49.

The experienced right-arm pacer has been sensational for the Lions in their journey to the finals. He has taken more than 2 wickets in every match in this tournament, twice he took 6 wickets in an inning. He is comfortably leading the most-wickets chart in this tournament with 21 wickets in just 6 matches with an average of 12.80 and an economy rate of 4.71 so far.