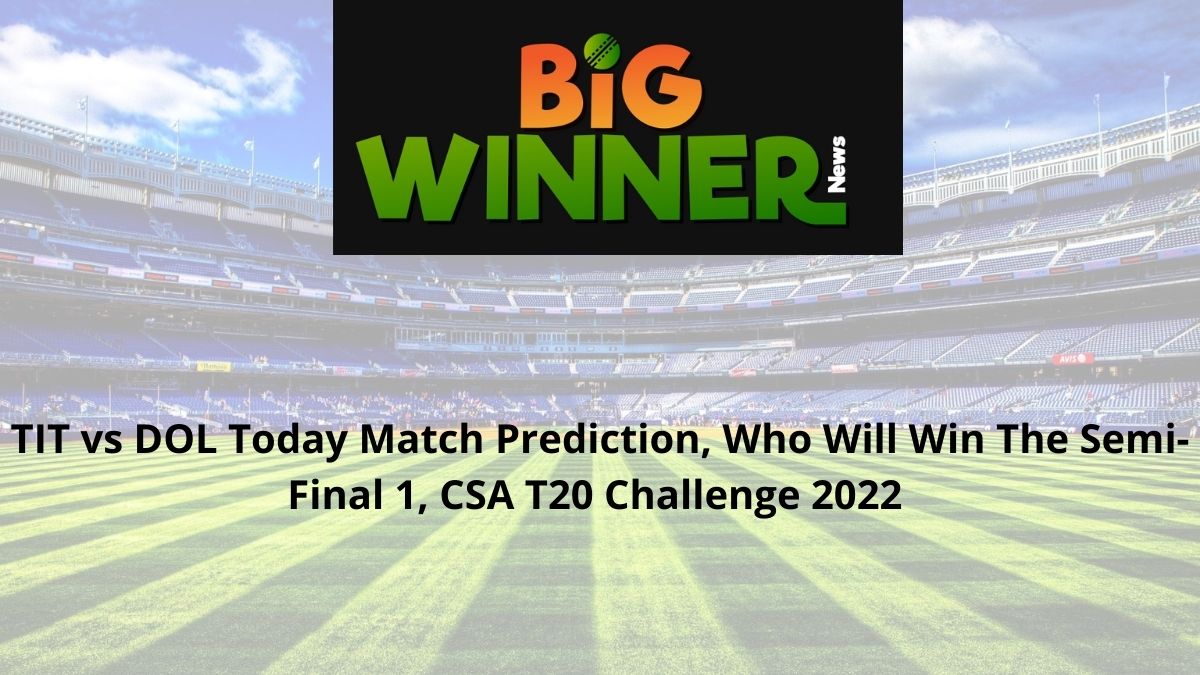 Our Experts bring you the finest today’s match prediction that you can trust. We are here for TIT vs DOL, Today Match Prediction, Semi-Final 1, CSA T20 Challenge 2022, Online Cricket Betting Tips, which will provide every user with a clear picture of which team and in what aspect they can place their bets.

Titans lost the opening match this season but since then they have every fixture in CSA Challenge 2022. They topped the group table with 6 wins from 7 matches and are expected to against Dolphins to reach the finals for the record 8th times. They remain most successful team in CSA Challenge history with 6 trophies but have been disappointing for the last two seasons.

Dolphins also have good track record in this tournament with featuring in the finals for 5 times. Dolphins were not that consistent this year but secured the 4th position with 17 points from the 7 group stage fixtures to qualify for the semi-finals. They beat Western Province by 65 runs in their last group stage fixture to secure this spot but definitely need to be at their best to beat Titans on Friday.

The temperature is expected to hover around 23°C on the match-day with 83% humidity and 19 km/h wind speed. There are 21% chances of precipitation during the game.

St George’s Park pitch has been great for an excellent t20 game as batters get help from the fast pitch in the starts and bowlers get extra help when it gets old. This season, average scored has dipped on this pitch so any score around 160 runs will be a demanding challenge for the team batting second.

Titans are expected to win first semi-final clash against Dolphins

Dolphins are struggling for the consistency in the last few games and failed to record two consecutive wins in last 5 matches. Titans are most consistent team this season and looking to regain CSA Challenge trophy after missing it for last two times. In the group stage fixture Titans won against Dolphin by a big margin of 7 wickets and are expected to repeat that feat on Friday.

The star middle-order batsman scored another fifty in the last match against North West and has been ranked in 4th position in most-runs charts in this tournament. He has scored 226 runs in 3 matches with an average of 75.33 and a strike rate of 129.88 so far.

The experienced left-handed South African international missed first 2 matches this season but now is leading most-runs chart for his team with an average near hundred. Miller has scored 193 runs in just 5 matches with an average of 96.50 and a strike rate of 160.83 this year.

The veteran South African spinner was once again trending for his bowling in the last match against North West where he took 2 wickets while conceding just 13 runs. Phangiso is leading most-wickets charts for Titans with 8 wickets in 7 matches with an average of 17.62 and an economy rate of 5.22.

The 23-year-old right-arm pacer missed first 4 fixtures this season but has returned to the squad and has been exceptional in last three matches. Despite missing majority of the matches Bosch has taken most wickets for the Dolphins this season. He has taken 7 wickets in just 3 matches with an average of 7.42 and an economy rate of 5.20 so far.