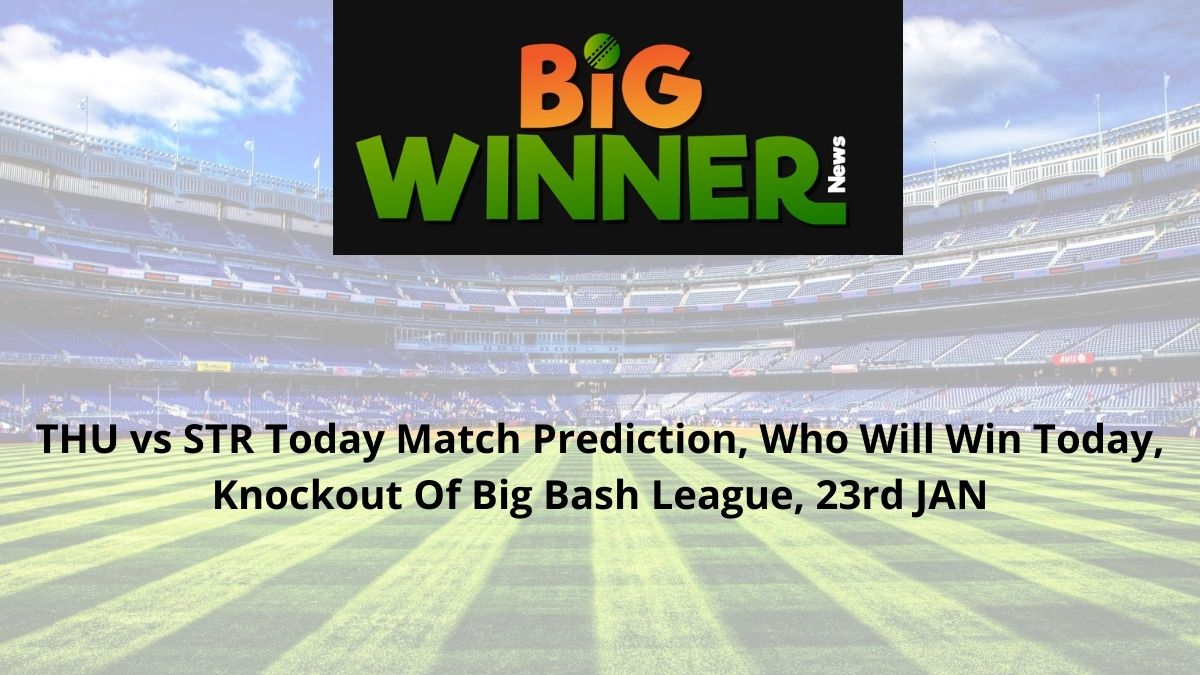 Our Experts bring you the finest today’s match prediction that you can trust. We are here for THU vs STR Today Match Prediction, Big Bash League 2021/22, Online Cricket Betting Tips, which will provide every user with a clear picture of which team and in what aspect they can place their bets.

Sydney Thunder enters the tournament knock-out after a nail-biting finish against Melbourne Renegades. Some good death bowling witnessed the team defend 171 on a good batting pitch where they returned with a 1-run victory. This was a must-needed win for the side to get things back on track after losing a couple of matches in a row. Thunder ended their Group stage in the third position with nine wins, three more than 4th placed Strikers. They enter this contest as favorites after winning their last three matches against Adelaide Strikers.

Adelaide Strikers had the poor possible start to the tournament. They had just two wins from their first ten matches and found themselves at an awkward position in the points table. The redemption then began with Rashid Khan’s 6-fer but that also marked the spin wizard’s final game for the Strikers this season. Despite losing him for the rest of the season, Strikers made sure to find proper help from their seasoned campaigners and kept the momentum going with four wins in a row, and with some help from other teams, they ended at the fourth spot.

The temperature is expected to hover around 22°C on the match-day with 54% humidity and 12 km/h wind speed. There are 03% chances of precipitation during the game.

Melbourne Cricket Ground is mostly moderate or balanced. The pitch will provide good support to the pacers and the batters will enjoy batting here as well. The average first innings score at this venue is 171 and anything below that would be easy to chase at this venue.

Adelaide Strikers expected to win the match against Sydney Thunder

Adelaide Strikers are in good form having won four matches in a row. Despite their poor head to head record against Thunder, Strikers are looking more optimistic at the moment and will enter this contest with better odds than Thunder. They are likely to take down the Khawaja’s men but this match could easily go down the wire.

After twin tons in the 4th Test, Usman Khawaja was quick enough to adapt to the shortest format. He make a comeback with a memorable fifty that included a match-winning partnership alongside Alex Hales. The skipper is the best bet among Sydney Thunder batters.

While Matt Short has been piling runs at one end, all eyes will be Travis Head as he is available for the selection. Head did play the last game–which marked his comeback to the shortest format after winning the Ashes–but couldn’t keep his form going as he went for just five. He will look to get some runs on the board today.

Despite being expensive, Daniel Sams has impressed everyone with his wicket-taking skills. He keeps it simple unlike others and let the batters do the mistake. Until now, he has 19 scalps and is likely to pick up a wicket or two here. Apart from the wickets, Sams also had managed to add important runs to the tally.

Nobody has more wickets than Peter Siddle in this edition. The Strikers skipper has been picking up wickets for fun in recent matches and had made sure to fill in the void created by the absence of Rashid Khan.