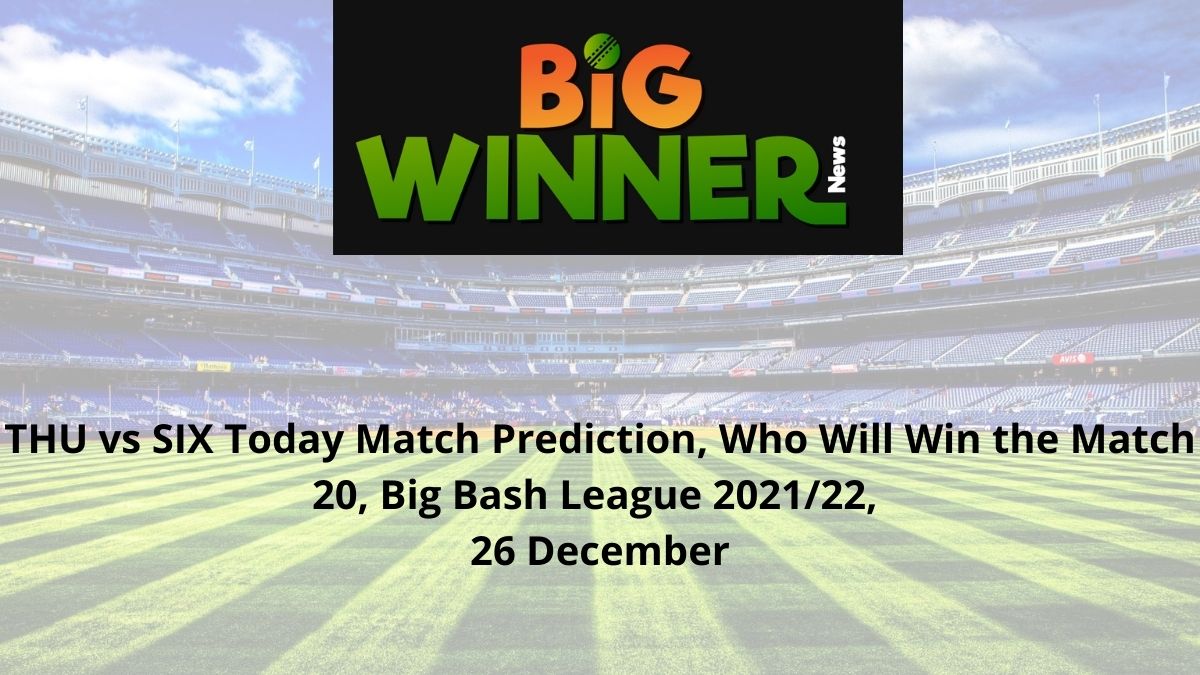 Our Experts bring you the finest today’s match prediction that you can trust. We are here for THU vs SIX Today Match Prediction, Match 20, Big Bash League, Online Cricket Betting Tips, which will provide every user with a clear picture of which team and in what aspect they can place their bets.

Sydney Thunder has played 4 matches in the series and they currently ranked 4th on the points table with 9 points. After a thumping win in the last game against Brisbane Heat, Sydney Thunder is looking for back-to-back wins to solidify their position at the top half of the table.

Sydney Sixers, on the other hand, has performed well so far in this tournament. They are currently ranked second on the points table with 14 points. The team has managed to win four matches from the five they have played and they will aim to continue their winning momentum.

The temperature is expected to hover around 24°C on the match-day with 77% humidity and 29 km/hr wind speed. There are 70% chances of precipitation during the game.

The pitch at the Sydney Showground Stadium is balanced. The stadium has a track record of being equally good for batting first or second. The average 1st innings score at this venue is 150 runs. Anything above 160 is a match triumphing total on this wicket.

Sydney Sixers expected to win the match against Sydney Thunders

Sydney Sixers have a well-balanced side and they have been brilliant in Big Bash League so far. While on the other hand, Sydney Thunders have also performed well and they are currently at the fourth position in the points table with 9 points, but Sixers are the favorites to win this match due to their recent performances. We expect the Sydney Sixers to win this game.

Josh Philippe is a tremendous batsman. He is in excellent form at the moment having scored 282 runs, he has shown tremendous maturity and composure so far to succeed against top-quality oppositions. He can give you big returns from this match and is our pick for best batsman from Sydney Sixers.

Sean Abbott has been pretty impressive in the previous game where he picked up 3 wickets and conceded only 24 runs. In the league so far he has picked up six wickets from three matches and he is our pick for best bowler from the Sydney Sixers.

Tanveer Sangha has really impressed everyone with his bowling skills, he has been pretty impressive in Big Bash League. He has picked up 8 wickets so far in this series and he can be an impactful player for this match and can give you big returns. He is our pick for best bowler Washington Sundar.

The average first innings score on this pitch is 150 and our experts predict that the team batting first here will score more than 150 runs which can give you big returns in this match.