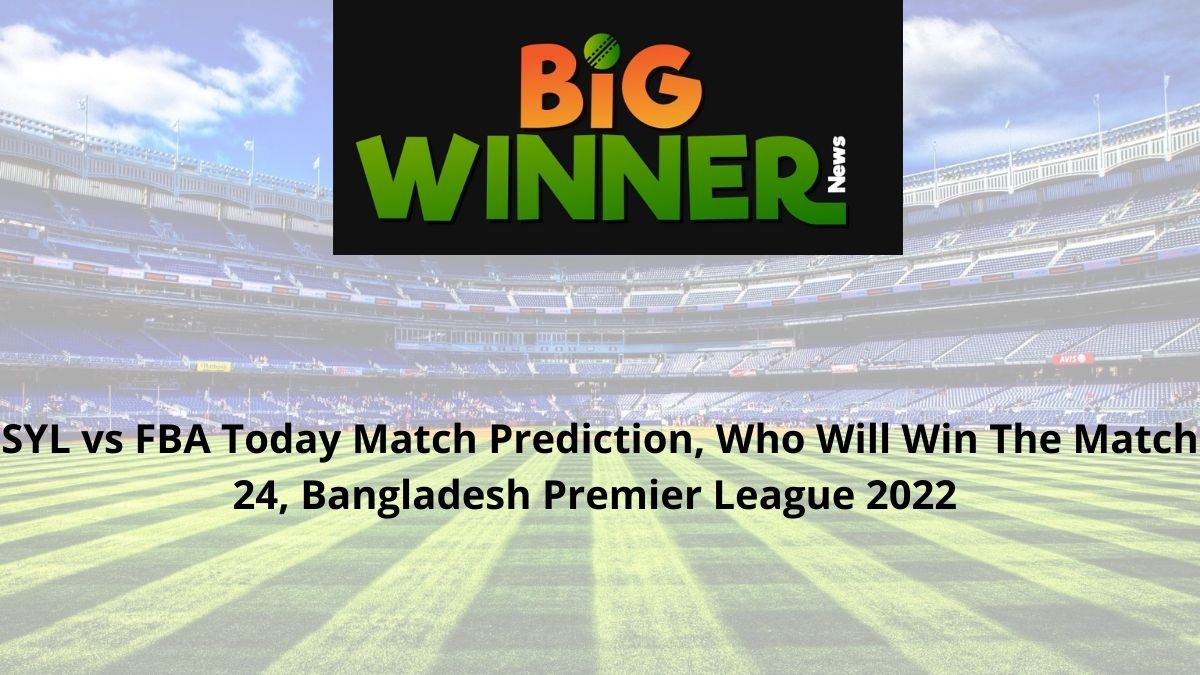 Our Experts bring you the finest today’s match prediction that you can trust. We are here for SYL vs FBA, Today Match Prediction, Match 24, Bangladesh Premier League 2022, Online Cricket Betting Tips, which will provide every user with a clear picture of which team and in what aspect they can place their bets.

Sylhet Sunrisers recorded their 5th defeat in 7 matches on Monday after their narrow defeat against Khulna Tigers. Before the match, management announced that English veteran Ravi Bopara has replaced Mosaddek Hossain as captain. This was not a surprise for the fans who are enduring a very poor season.

Fortune Barishal side struggled for consistency at the start of this tournament but now sit at top of the table. After their latest win against leaders Comilla Victorians they now have 11 points from the opening 8 matches. The Victorians and The Tigers have played a game less and are behind 2 and 3 points respectively.

The temperature is expected to hover around 20°C on the match-day with 63% humidity and 9 km/h wind speed. There are 5% chances of precipitation during the game.

Sylhet pitch has been balanced for both batsmen and bowlers in the past. Latest two matches on this pitch have shown that any decent score around 150 is defendable. Toss will be crucial for both sides as teams bowling first have better chances to win.

Fortune Barishal are expected to win against Sylhet Sunrisers.

Both teams are playing against each other just after 24 hours of gap as the original fixture was scheduled for 4th February. Fortune Barishal recorded a big win against league leaders Comilla Victorians on Monday and jump to top of the table. Barishal side now has 11 points from opening 8 matches with 5 wins.

Sylhet Sunrisers lost against Khulna Tigers on Monday evening by 15 runs. This was their 5th defeat in 7 matches this season which reflects on their table position as well. The Tigers are placed in last position in the table with 3 points from 7 matches.

Anamul Haque continues to impress despite his team’s struggles in Bangladesh Premier League 2022. Haque has scored 195 runs in just 6 matches with an average of 32.50 and strike rate of 121.87.

Star Bangladeshi all-rounder is having one of the best BPL season of his career as he is leading both most-wickets and most-runs charts for his team. Shakib Al Hasan has scored 187 runs in 7 matches with an average of 26.71 and strike rate of 133.57 this year.

The left-arm spinner has missed three matches this season but still leading most-wickets charts for the Sunrisers. Nazmul Islam has taken 8 wickets in just 3 innings with an average of 9.25 and an impressive economy rate of just 6.25 this season.

The 38-year-old West Indies all-rounder keeps showing his fitness in BPL 2022 with most wickets for Fortune Barishal. Bravo has taken 12 wickets in 6 matches with an average of 15.75 and an economy rate of 8.33 this year.