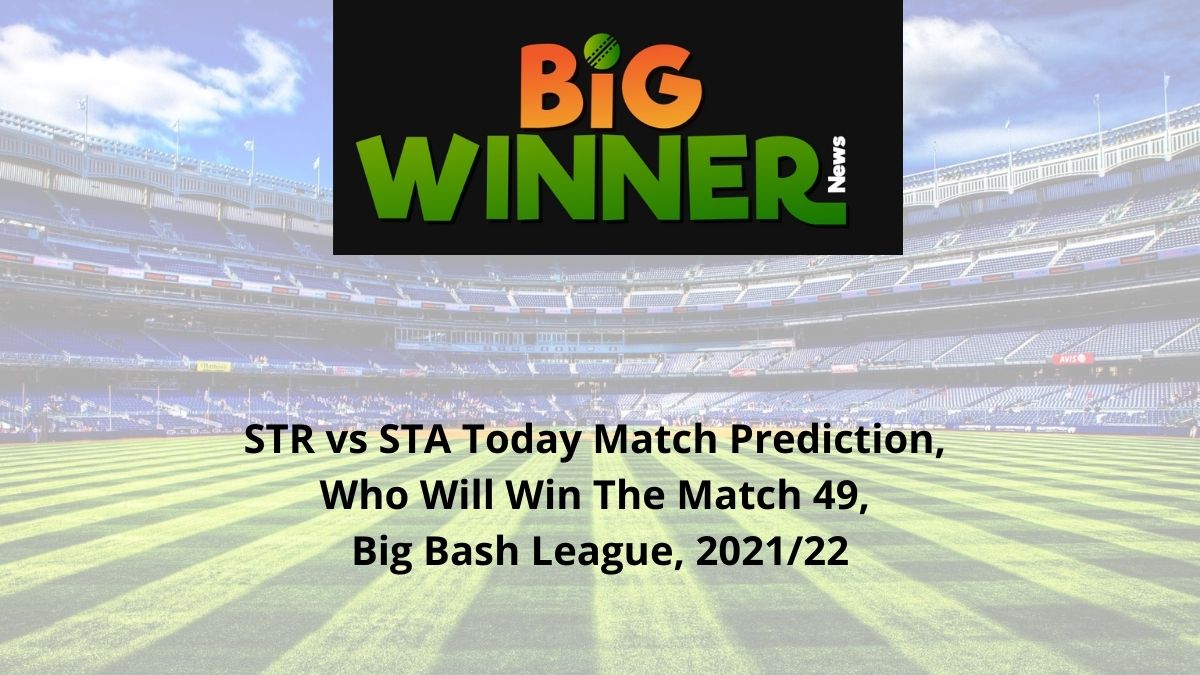 Our Experts bring you the finest today’s match prediction that you can trust. We are here for STR vs STA Today Today Match Prediction, Match 49, Big Bash League, Online Cricket Betting Tips, which will provide every user with a clear picture of which team and in what aspect they can place their bets.

Adelaide Strikers won their last match against Pert Scorchers by 6 wickets with 18 balls remaining. Perth put in 127/9 total while batting first where Pakistani veteran Fawad Ahmed took 3 wickets for 30 runs. Strikers’ openers Matt Short and Henry Hunt started well with 52 partnerships and chased the target easily with 6 wickets in hand. With this win, Strikers move to 5th position in the BBL table with 20 points from the opening 12 matches.

Melbourne Stars also enter this fixture with a much-needed win in their last match. Stars’ bowlers restricted Renegades to just 122/7 in the first inning and then Glenn Maxwell single-handedly guide his side to victory with 68 runs off 45 balls. A win on Saturday will guide them past tonight’s opponent who is just 2 points ahead.

The temperature is expected to hover around 22°C on the match-day with 60% humidity and 4 km/hr wind speed. There are 0% chances of precipitation during the game.

Pitch is proving helpful for the batsmen this year with the average score being 160 so far. So scoring anything above it will be enough for both teams. Also, a toss will play a big part as teams batting first have more chances to win this clash.

Melbourne Stars expected to win the match against Adelaide Strikers

Melbourne Stars showed their improvement in the last match with excellent all-round performance. Bowlers are in a good rhythm and they are aware of the importance of this clash. Adelaide Striker will be without their star spinner Rashid Khan, who took 6 wickets in the last match and has taken 20 wickets so far. This will be a tough fixture for both teams but Stars will win this one by a narrow margin.

Star all-rounder is having one of the best seasons of his career so far. Short is leading the score chart for Strikers with 326 runs and has taken 5 wickets as well in 12 matches this edition. He has been tipped as the best batsman for the Strikers on Online Betting Platforms.

Wicket-keeper batsmen is in great form for the Melbourne stars and have been the top scorer for them with 313 runs in 10 matches. He is scoring consistently and is having a striker rate of around 150.00.

With Rashid Khan missing, Peter Siddle has to carry his team’s bowling unit. The veteran captain has taken 20 wickets so far and leading the most-wickets charts alongside Rashid Khan.

Melbourne Stars’ captain was in excellent form in the last match where he took two crucial wickets and maintained an economy below 5. He has been tipped as the best bowler for Stars on betting platforms.