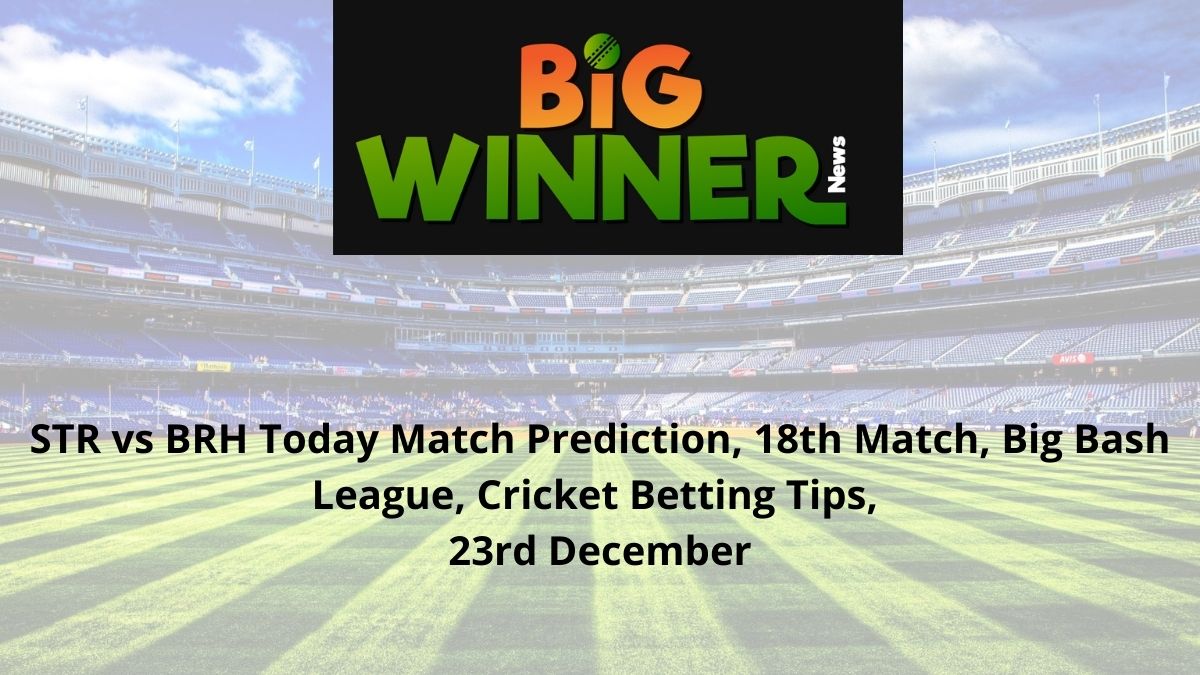 This is the only destination that brings you the finest today’s match prediction that you can trust. We are here for BRH vs. STR Today Match Prediction, Big Bash League, Online Cricket Betting Tips, which will provide every user with a clear picture of which team and in what aspect they can place their bets.

Adelaide Strikers lost another final over thriller and it was their 2nd last defeat this year. The Adelaide team is struggling to find the correct formula to win matches and the absence of Travis Head and Alex Carey is hurting them badly. The only positive news from the last fixture was the return of Matt Renshaw who looked in good touch after returning from Australia A duties.

It will be their 2nd game in the span of 3 days so definitely there will be some tired legs but this game against Brisbane Heat could be the deciding factor of this season. They have only won one match so far from 4 games and teams like Melbourne Stars and Sydney Thunders are marching ahead. If Strikers doesn’t fuse Brisbane’s heat then it could be a really tough task in the latter stages.

Brisbane Heat is again at the same position as last season with only one win from the first 4 games. They started the tournament with 2 losses but the win against Melbourne Renegades gave fans some glimpses of last year’s ruthless Brisbane Heat but the match against Sydney Thunder brought fans back to the earth.

Brisbane Heat is really struggling in the batting department but in the last match their bowling also got some hammering. They signed Ben Duckett for this season to solve their middle muddle but he himself has found it tough to face the bouncing pitches of Australia. Again it all has come back to Chris Lynn to do the magic but this year, he has not looked in his usual destructive nick and Max Bryant’s form has made things really tough for the team.

Adelaide’s weather was terrific during Ashes day night match and conditions are again expected to be top notch for this fixture. Temperature will be around 27 degrees and the ball might swing a bit in the air in the evening under lights.

Pitch in Adelaide has always been equal to both ends with all players being in the game. Seamers will have a role in powerplay overs and spinners will also enjoy in the middle. However batsmen in the first innings might have a tough time in powerplay overs as strong wind and white Kookaburra ball under light do something.

STR vs. BRH – Who will win the match, Today Match Prediction:

Brisbane Heat is expected to win the match against Adelaide Strikers

TThe Prediction experts feel Brisbane Heat will win against Adelaide Strikers in this match. Brisbane Heat are not off to a good start but their team is capable of doing the same magic as last year. Their team is well balanced and it is only a matter of time until their big power pack players like Chris Lynn start firing then Brisbane could be a force to reckon with. On the other hand, Adelaide has so far been below par this season and their batting has been the biggest culprit. Brisbane Heat has an edge over Adelaide Strikers in absence of their key batters like Alex Carey and Travis Head.

Jonathan Wells played an entertaining knock of 32 at a strike rate of 168 in the last match and if could have stayed for longer then the story could’ve been different. Wells has been an integral part of Adelaide Strikers for years now and after a slow start, he looked back to best in the last game. Brisbane Heat is his favorite opponent and batting at number 4 gives Wells a perfect opportunity to settle in and fire the cylinders.

Sam Heazlett is the only top-order batsman of Brisbane Heat to cross the 100 runs mark this season. He was the reason why Brisbane crossed the Finish line against Melbourne Renegades and his performance is going to be crucial throughout the whole season especially due to poor run of form Premier Batsmen like Max Bryant, Chris Lynn, and Ben Duckett.

Fawad Ahmed joined this season from Perth Scorchers and surprised everyone as he was a starter at Perth Scorchers and Adelaide Strikers already had Afghanistan’s, Rashid Khan. Ahmed proved everyone wrong and fought way up to the playing eleven and in the last match, his spell of 16 for 1 nearly took the team home. His early glimpses of partnership with Rashid Khan in middle overs have looked scary and if they carry on like the last match and certainly Fawad Ahmed will have a season to remember.

Mark Steketee returned from Australian A duties and in the very first match, he bowled some thunderbolts which was amazing to witness. He finished his spell with 32 for 2 and was Heat’s best bowler by a huge margin. Steketee was in line to get called up for the Melbourne test after Steve Smith’s praise but Scott Boland edged him out and now Mark has a point to prove from this game against Adelaide Strikers.