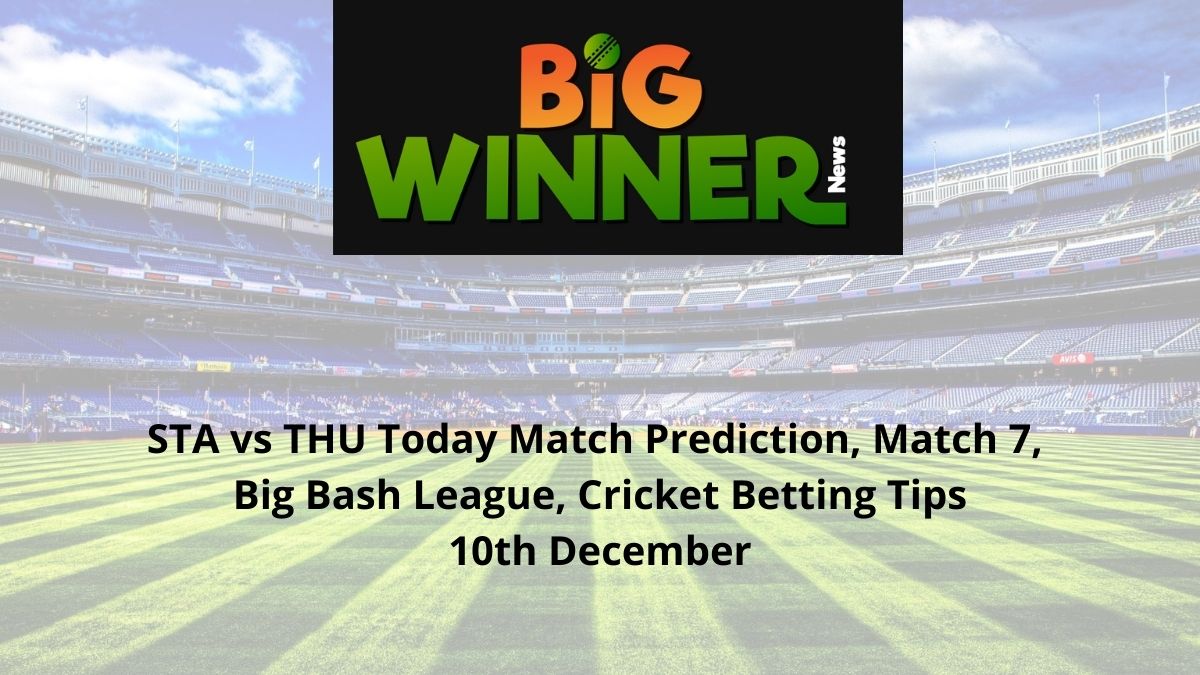 We are here for STA vs. THU Today Match Prediction, Big Bash League, Online Cricket Betting Tips, which will provide every user with a clear picture of which team and in what aspect they can place their bets.

Sydney Thunder started their campaign on a strong note against Brisbane Heat with a thumping win by 7 wickets. From ball one, they looked in complete control with seamers dominating the proceedings in powerplay and spinners continuing the domination. They are currently looking strong at the moment and especially with no big names due to Ashes gives them a huge edge over other teams.

The Sydney team will be hoping to continue their great start with a win against depleted Melbourne Stars who are missing many big players due to injuries or other factors which gives Thunder a golden chance to consolidate their position at top half of points table early in the tournament. Match is going to be in Melbourne where seaming conditions night favour Thunder more than Stars looking at their current availability of players.

Melbourne Stars were thrashed brutally by Sydney Sixers in their first match to give them the tournament’s worst-ever loss by 152 runs. Stars firstly conceded 213 runs and then their batting lineup just got blown away for just 61 runs to give them a bashing of a lifetime. The good thing for the Stars is that it was just the first game and they were without their many key players like Nathan Coulter Nile, Marcus Stoinis, Andre Russell.

Big relief for Melbourne Stars is that Nathan Coulter Nile will be returning for this fixture and the Russell mania is also available after completing the quarantine which will give them a huge boost going to tough fixtures forward. Stars have a historical advantage over Thunder as they have lost only once in the last 5 encounters but looking at last match’s performance, they might start as underdogs

Top Batsmen of Melbourne Stars from the last Match

The weather at Melbourne today will be ideal for batting with no chances of any rain or storm. Although Wind speed is going to be high which will be a boost for seam bowlers early in the innings.

Pitches in this tournament so far have been good for batting but it will be the first match on MCG so it is tough to predict the surface yet. Looking at the history of this venue, runs have come easily in past seasons and teams have preferred chasing here. The average score will be around 160 and spinners will enjoy it here because of big boundaries.

STA vs THU – Who will win the match, Today Match Prediction:

Melbourne Stars is expected to win the match against Sydney Thunders

The Prediction experts feel Melbourne Stars will win against Sydney Thunders in this match. Melbourne Stars suffered a disappointing defeat in the first match which might raise some serious questions on their team, but it is still the start of the tournament, and their squad is full of match winners.

Players like Andre Russell and Nathan Coulter Nile are set to return which is going to make a big impact and playing at home conditions give them a huge advantage. Although Sydney Thunder looked strong in the first match with 7 wickets win, they are very dependent on Alex Hales, and without Saqib Mahmood and Usman Khawaja, they might struggle against Melbourne Stars. We think Melbourne Stars will win this match.

Alex Hales was a man on a mission last season and scored unbelievable 543 runs which were still not enough for him to make a comeback into the English team. This year he is more hungry and especially with the T20 World Cup set to be held in the same conditions so he might look to send a message to selectors through strong outings in this season.

Hales is a premier T20 batsman and his performance in Australian conditions is even more dangerous. He likes balls coming onto the bat and Melbourne will be the right place for him to shrug off the first match’s disappointment and start the tournament on high.

Glenn Maxwell failed in the first match, and it was the main reason behind Star’s disastrous show with the bat. In absence of Marcus Stoinis, the whole responsibility of making runs leaves on Maxwell’s shoulders and he needs to play long if Stars want to defeat Thunders in this match.

So far, Maxwell had a mixed year as he smashed 514 runs in IPL this season but failed to replicate it in the T20 World Cup, but he will be feeling more confident in these home conditions. He has a good record in Australia and will hope to regain his touchback and lead Stars to their maiden victory of this season.

The golden arm of the 2020 season was the architect behind Thunders’ victory in the first match with 3 crucial wickets and will be hoping to replicate the 2019-20 season after last season’s disappointment. Sams is the rising left-arm fast bowler from New South Wales and in recent years, he has been doing terrific work with bat and ball.

His breakthrough season came in 2019 where he picked 20 plus wickets which also earned him stints at IPL with Delhi Capitals and Royal Challengers Bangalore. Sams swings the ball upfront but his wicket-taking ability at death overs is what makes him a really serious bowler.

Nathan Coulter Nile is set to return for this match after missing the first against Sydney Sixers. The West Australian pacer is the heart and soul of this Melbourne lineup and picked 11 wickets last season at an astonishing average of 15.

He has been an injury-prone player and also missed initial matches for Mumbai Indians this season, but the best thing is that he compensates for his absence with strong performances with the ball. He is a fast and furious candidate, and his skiddy nature makes him a big threat to any batting lineup at Melbourne Cricket Ground.