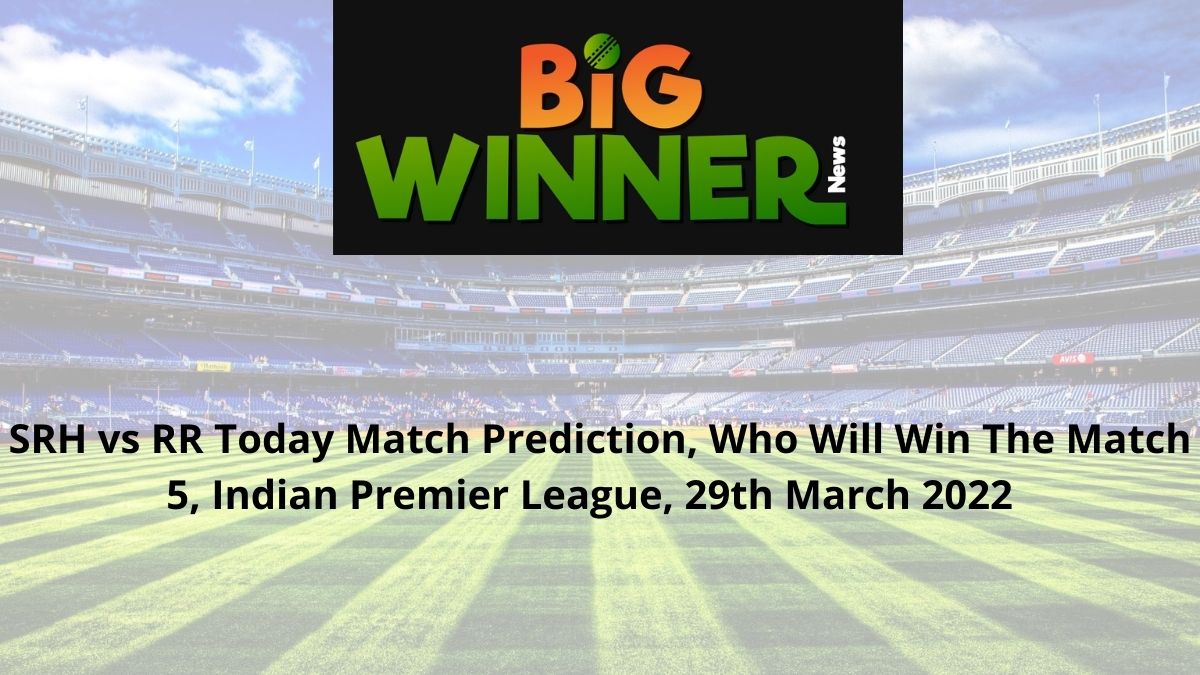 Our Experts bring you the finest today’s match prediction that you can trust. We are here for SRH vs RR, Today Match Prediction, Match 5, Indian Premier League, Online Cricket Betting Tips, which will provide every user with a clear picture of which team and in what aspect they can place their bets.

It was a season to forget for Sunrisers Hyderabad last year. They finished in last place with just 3 wins from the 14 matches despite having a quality lineup. Big name players David Warner, Jason Roy, Jason Holder, Jonny Bairstow, and Rashid Khan were released from the squad and there was no attempt to buy them in the mega-auction.

Hyderabad did re-sign former players Abhishek Sharma, Bhuvneshwar Kumar, and T Natarajan. But biggest signing was in form of West indies wicket-keeper batsman Nicholas Pooran for INR 10.75 Crore. Pooran is in form of his life and this valuation will definitely prove as much worth. They also spend big on signing Indian all-rounder Washington Sundar (INR 8.75 Crore) and former KKR star Rahul Tripathi (INR 8.50 Crore).

Rajasthan Royals started last year with big wins and in contention to finish in top-four positions. But they lost last 5 out of 6 matches and finished season in 7th position with just 5 wins from the 14 fixtures.

But they spent smart in the mega-auction to sign some of the best t20 names in the IPL and now considered as one of the strongest teams this season, at least on the paper. They retained their star captain Sanju Samson alongside Jos Buttler and Yashasvi Jaiswal, but released star players Ben Stokes, Rahul Tewatia, and Chetan Sakariya.

The temperature is expected to hover around 34°C on the match-day with 35% humidity and 1 km/h wind speed. There is 01% chance of precipitation during the game.

Maharashtra Cricket Association pitch is perfectly balanced for the t20 matches and it’s records justify it. Pitch is less green compared to Mumbai pitches and average score is around 150 runs, much less than other IPL venues.

Rajasthan Royals are expected to win the match against Sunrisers Hyderabad

Rajasthan Royals came as best team from after the mega auction with excellent strategy from the management led by Kumar Sangakkara. They signed proven quality players and now are one of the best teams on the paper. Hyderabad also signed some big guns but most of the signings were former players. Rajasthan Royals have won 2 out of their last 5 matches against Sunrisers Hyderabad but their quality signings make them favorites to win this fixture.

The New Zealand skipper replaced struggling David Warner during mid-season last year as team’s captain and then was first choice to retain for this season. SRH finished in last position but Williamson was team’s highest run-scorer with 266 runs in 10 matches with an average of 44.33 and a strike rate of 113.19.

The English wicket-keeper batsman is one of the most destructive T20 players in the world and that’s why he was retained by RR before the auction. Buttler has scored 1968 runs in just 68 IPL matches with an average of 35.1 and a strike rate of 150.00.

The experienced star Indian pacer was re-signed by Hyderabad side and will leading their inexperienced bowling unit this season. Bhuvi won two Orange Cap awards in SRH jersey and was in excellent form for India in recent international fixtures. He has taken 142 wickets in 132 IPL matches with an average of 25.3 and an economy rate of just 7.30.

Royal Challengers Bangalore were expected to retain Yuzvendra Chahal but that didn’t happen, which came as a big shock for RCB fans. Rajasthan Royals spent big to secure the signature of best Indian leg spinner. Chahal has taken 139 wickets in IPL 114 matches with an average of 22.3 and an economy rate of 7.59 so far