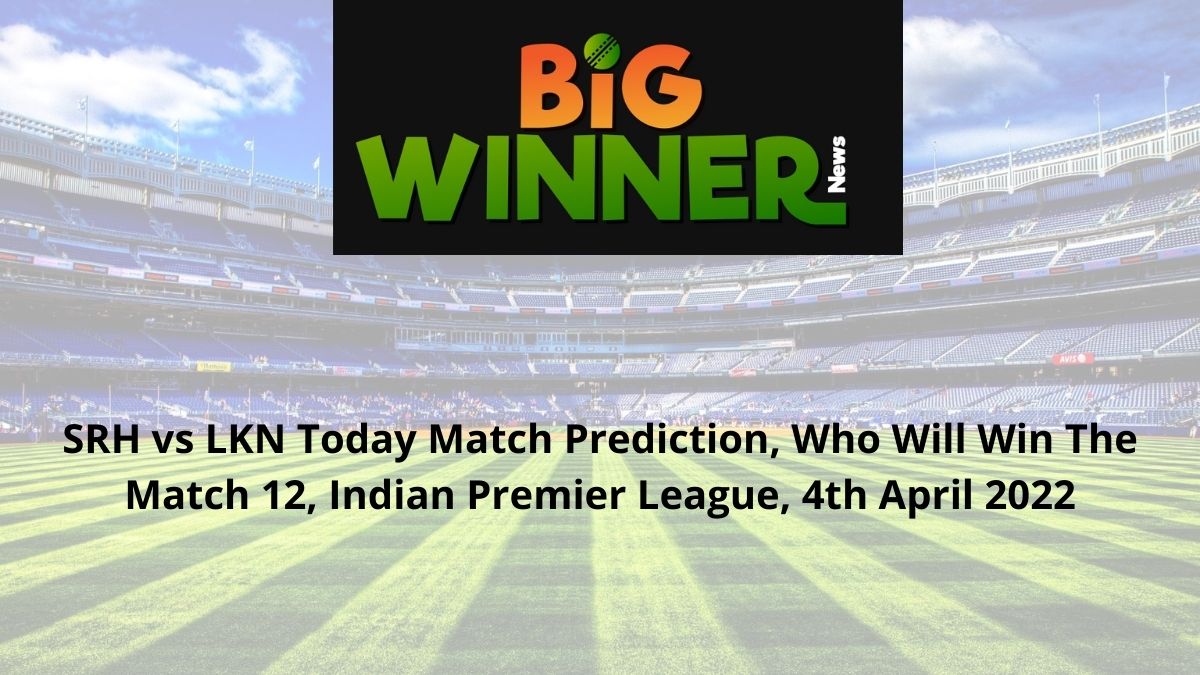 Our Experts bring you the finest today’s match prediction that you can trust. We are here for SRH vs LKN, Today Match Prediction, Match 12, Indian Premier League, Online Cricket Betting Tips, which will provide every user with a clear picture of which team and in what aspect they can place their bets.

Sunrisers Hyderabad started this season with a big defeat against in-form Rajasthan Royals. RR scored 210 runs while batting first, where every bowler conceded runs at more than 9.0 economy rate, except Bhuvneshwar Kumar. Hyderabad lost their captain Kane Williamson to controversial catch-out decision in the second over.

Williamson was clearly not-out but umpire gave out despite reviewing with third-officials. SRH have officially launched complaint to BCCI over this decision as well. Aiden Markram scored an unbeaten fifty with star all-rounder Washington Sundar scoring 40 runs off just 14 balls. But Sunrisers were restricted to just 147 runs in the end which was their fourth loss in last five matches.

Lucknow Super Giants enter this fixture with a high morale after winning their first-ever IPL match. Their win came against heavyweights Chennai Super Kings in a heart-beating thriller last Thursday. CSK scored a massive total of 210 runs while batting first but LKN chased down this total 6 wickets and 3 balls remaining.

Lucknow Super Giants are set to welcome star all-rounder Jason Holder in the starting eleven, who trained with the first-team yesterday. Australian ace is still unavailable for selection due to his international duties against Pakistan.

The temperature is expected to hover around 29°C on the match-day with 83% humidity and 8 km/h wind speed. There are 02% chances of precipitation during the game.

Dr DY Patil pitch is very hard to predict due to other sports being regularly conducted here. Average score on this pitch is below 150 runs but 4 times teams have crossed 170 runs mark already this season.

Lucknow Super Giants registered their first-ever IPL win with a big win over champions Chennai Super Kings in the last match. Key batsmen are looking in good form but bowlers need to contribute more. Hyderabad lost their first match by big margin against Rajasthan Royals and are second favorites to win against high-flying LKN on Monday evening.

New Zealand legend was retained by Hyderabad for this season and remains one of the best batsmen in the world. He opened the inning for SRH in the first match but was caught out to just 2 runs. It was a controversial decision from the third umpire, as later replay footage showed the ball touched the ground before Devdutt Padikkal took the catch. Williamson has scored 1887 runs in just 64 IPL matches with an average of 39.3 and a strike rate of 130.8.

The star Indian wicket-keeper batsman quickly returned to his usual best with 40 runs knock against CSK in the last match. He was second highest runs-scorer last season and is looking solid for this year as well. KL Rahul has scored 3313 runs in 96 IPL matches with an average of 46.7 and a strike rate of 136.5.

The experienced Indian ace bowler is leading Sunrisers Hyderabad’s bowling unit for years with two Orange Cap awards to his name. Bhuvneshwar was the best bowler against Rajasthan Royals in the last match with a wicket and economy rate of just 7.25, where opponents scored massive 210 runs. He has taken 143 wickets in 133 matches with an average of 25.3 and an economy rate of 7.29.

The 25-year-old right-arm pacer finished last season with 24 wickets for Delhi Capitals, 2nd in most-wickets chart. He started this season with a wicket against Gujarat Titans and two wickets against Chennai Super Kings in the last match. Avesh Khan has taken 32 wickets in 27 IPL matches with an average of 25.6 and an economy rate of 8.31.