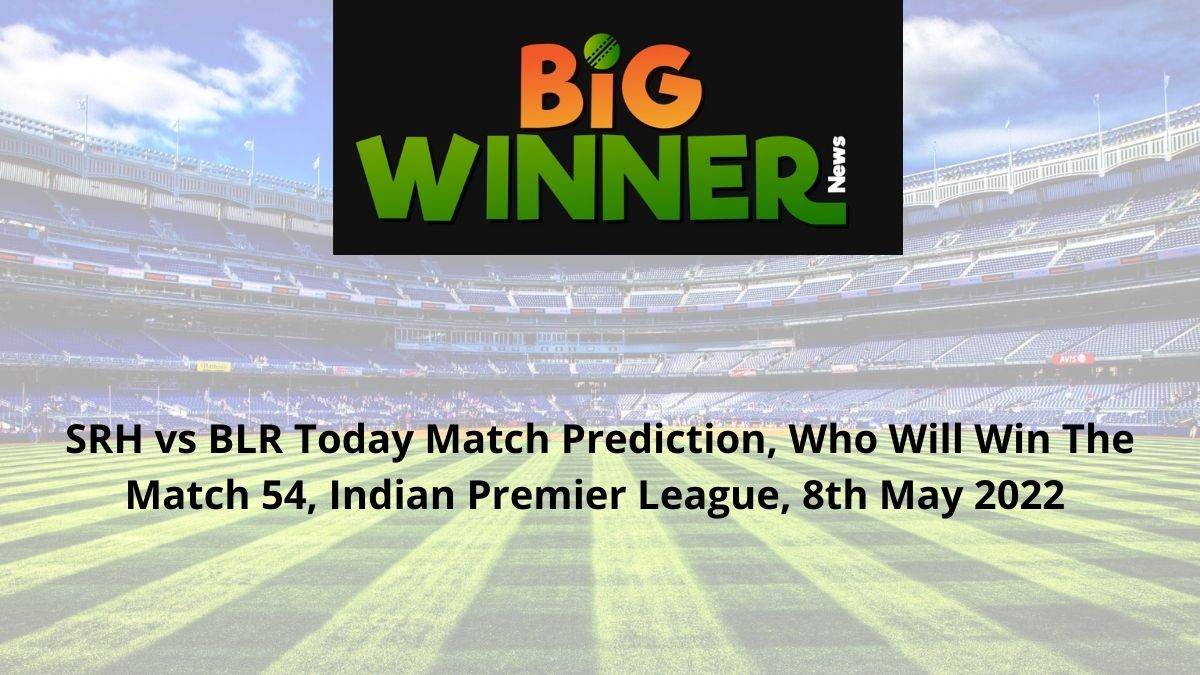 Our Experts bring you the finest today’s match prediction that you can trust. We are here for SRH vs BLR, Today Match Prediction, Match 54, Indian Premier League, Online Cricket Betting Tips, which will provide every user with a clear picture of which team and in what aspect they can place their bets.

Sunrisers Hyderabad suffered another narrow defeat in their last match and now their hopes for reaching playoffs are in serious doubt. Delhi Capitals scored 207 runs while batting first with bowlers failing to maintain balanced economy rate once again. Then they came close to chase down this big target but failed short of 21 runs.

This was their third consecutive defeat after winning previous five matches in row. Sunrisers Hyderabad are now placed in 6th position in the league table with 10 points from the opening 10 matches.

This win came after three consecutive defeats for the Royal Challengers. But with this win, they reached 4th spot in the league table with 12 points from the opening 11 matches.

The temperature is expected to hover around 33°C on the match-day with 63% humidity and 20 km/h wind speed. There are 3% chances of precipitation during the game.

Wankhede pitch is proving to be a neutral for both batters and bowlers this season. We can see a little grass is helping pacers with an extra bounce and pace in powerplay overs. We can expect a high-scoring clash of around 180 runs on Sunday afternoon.

Sunrisers Hyderabad cleans bowled today’s opponent to just 68 runs two weeks ago in the first reverse fixture of this season. But since then, the Sunrisers have lost all of their last three matches. Bangalore Royal Challengers reached in top-four position in the league table with an important win against champions Chennai Super Kings in the last match. They are now favorites to win this clash on Saturday afternoon and solidify their top-four position further.

The young Indian batter was retained before the auction by Sunrisers and he has proved his quality with consistent big displays this season. Sharma scored 47 runs while chasing 68 runs target against today’s opponent and will be looking to repeat that performance once again. He is leading most-runs chart for SRH with 331 runs in 10 matches with an average of 33.10 and a strike rate of 134.00 so far.

Star Indian batsman and former captain is in good form lately but is still not up to his usual best this season. He scored first fifty of this season against Gujarat Titans and then had a god knock of 30 runs against Chennai Super Kings in the last match. Kohli has scored 216 runs in 11 matches with an average of 21.60 and a strike rate of 111.91 this season.

The experienced Indian seamer is in excellent form for the Sunrisers Hyderabad lately with strict economical spells. Bhuvi took 1 wicket while conceding just 8 runs against Bangalore side last time. He has maintained best economy rate among SRH bowlers with 10 wickets in 10 matches with an average of 27.40 and an economy rate of just 7.17.

The star Indian pacer was excellent against Chennai Super Kings in the last match. He took 3 big wickets and now entered the race for Purple Cap again this season. Patel has taken 13 wickets in 10 matches with an average of 22.76 and an economy rate of 7.78 so far.