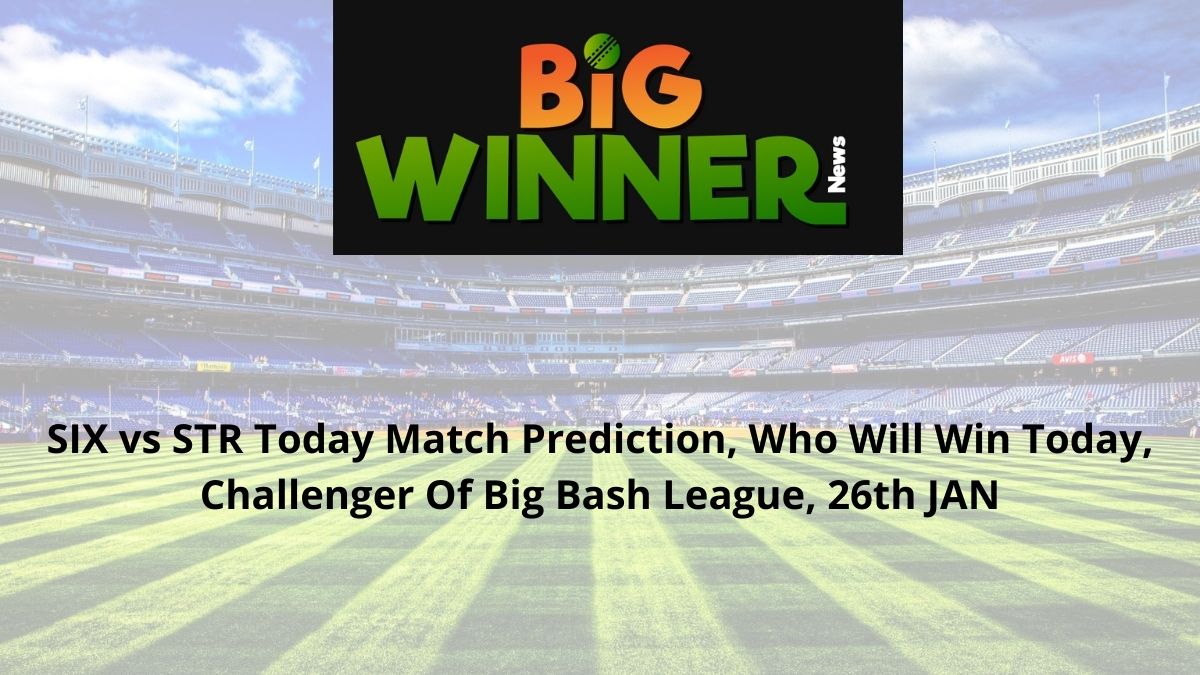 Our Experts bring you the finest today’s match prediction that you can trust. We are here for SIX vs STR Today Match Prediction, Big Bash League 2021/22, Online Cricket Betting Tips, which will provide every user with a clear picture of which team and in what aspect they can place their bets.

Sydney Sixers reached the finished group table in the second position with 35 points in 14 matches. They won 9 and lost just 4 matches but struggling for consistency lately. Sixers have lost two of their last five matches, including their last play-off fixture against Perth Scorchers. They now enter the Challenger match and face in-form Adelaide Strikers who beat them by 8 wickets not more than ten days ago.

Adelaide Strikers turned the table around with consistent impressive displays after poor start to the season. They now reach the Challenger match after two knockout wins over Sydney Thunders and Hobart Hurricanes. Strikers also managed to win against Sixers in their last meeting on 17th January, which was their first win in last five matches against the champions.

The temperature is expected to hover around 26°C on the match-day with 63% humidity and 16 km/h wind speed. There are 12% chances of precipitation during the game.

Sydney Cricket Ground is helpful for pacers but home team Sydney Sixers have dominated with bat as well on this pitch. Average score in the first inning is decent 160 runs, which will be enough to defend but teams have won more matches while batting second.

Sydney Sixers expected to win the match against Adelaide Strikers

Sydney Sixers have won the last two Big Bash League trophies and now looking to make it three in three. Their experience in handling Challenger Match pressure will be crucial on Wednesday. They are missing star Australian batsman Steven Smith after failing to register him in the early stages of the tournament.

Adelaide Strikers are in great momentum lately with five wins in the last five matches, including tonight’s opponents. But they will find it tough to beat Strikers at their home who are the most successful team in this tournament. Perth Scorchers are already booked the final spot and will be watching this fixture to take on them on Friday evening at Docklands Stadium, Melbourne.

Australian wicketkeeper-batsman Josh Philippe has been one of their best performers in this edition. He scored just 5 runs off 8 balls in the last match against Perth Scorchers but is the leading run-scorer for the Sixers with 429 runs this year.

Matt Short is shining with both ball and bat for Adelaide Strikers this year and will be a key for them against mighty Sixers. He has scored 487 run with a strike rate of 157 this season.

The 25-year-old left-arm pacer is the leading wicket-taker for the Sixers this season with 24 wickets in 15 matches with an average of just 13.45 and an economy rate of 7.34. He has been tipped as a best bowler for Sydney Sixers on betting platforms.

Adelaide Striker captain Peter Siddle is the leading wicket-taker for not only his team but in the entire tournament this year. He has taken 29 wickets in 16 matches with an average of 17.37 and an economy rate of 8.42.