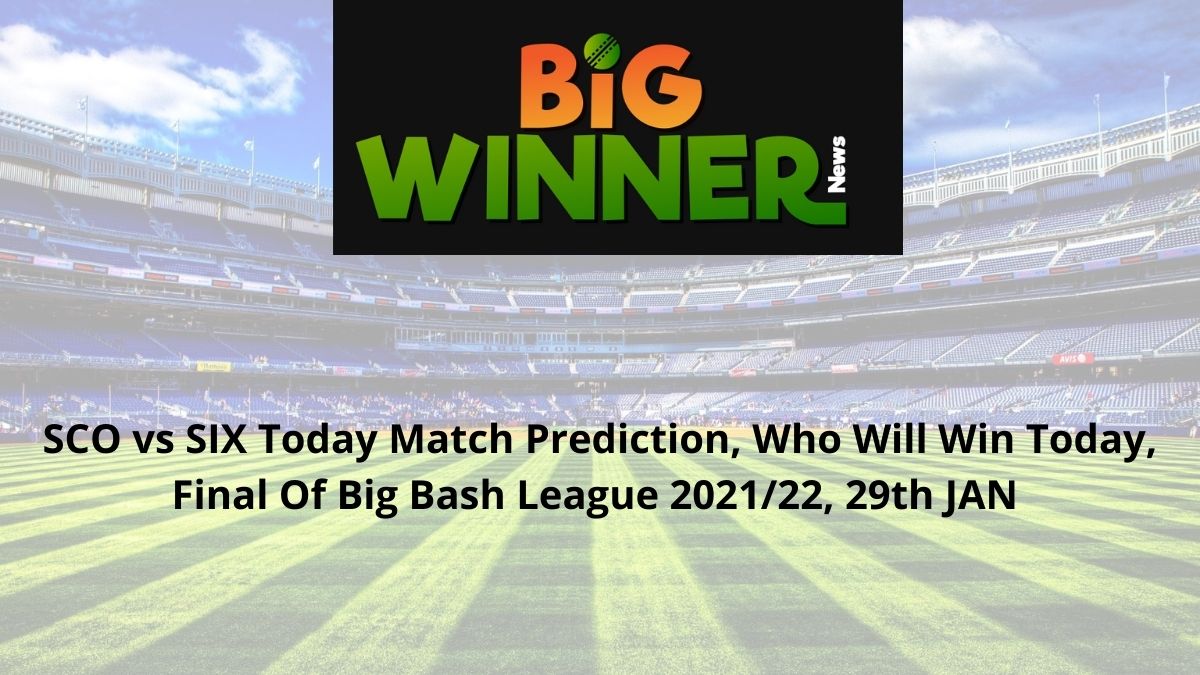 Our Experts bring you the finest today’s match prediction that you can trust. We are here for SCO vs SIX Today Match Prediction, Final Of Big Bash League 2021/22, Online Cricket Betting Tips, which will provide every user with a clear picture of which team and in what aspect they can place their bets.

Perth Scorchers finished Big Bash League 2021-22 season as group stage toppers with 11 wins and 3 losses in 14 matches. They beat tonight’s opponent at the same venue in qualifier to become the first team to reach the finals. Scorchers remained most consistent team this edition and are tipped to lift the trophy on Friday.

Sydney Sixers finished Big Bash League 2021/22 group stages in 2nd position with 35 points, just 5 behind Scorchers. Sixers registered 9 wins and lost 4 in 14 matches this year. They lost qualifier against Scorchers but won challenger match against Adelaide Strikers by 6 wickets but on the last ball thriller.

The temperature is expected to hover around 22°C on the match-day with 67% humidity and 24 km/h wind speed. There are 22% chances of precipitation during the game.

Melbourne pitch is well balanced for both batsmen and bowlers and we witnessed the same when these two met last week on the same pitch. Batsmen easily crossed average score mark and but bowlers failed to took wickets in the last few overs. So once again it will be a high-scoring match between two in-form teams at this famous pitch.

Perth Scorchers expected to win the match against Sydney Sixers

Perth Scorchers are aware of Sixers’ record in this tournament but will be motivated with their current form and their last match win against the tonight’s opponent. Australian star Mitchell Marsh has played just 7 matches but has scored 342 runs with an average of 68.40. He will be a key for Scorchers to end Sydney Sixers’ winning streak.

Sydney Sixers lost against Perth Scorchers in the qualifiers and will be motivated to take an instant revenge in the final. Sixers are also extra motivated to make it three in three consecutive Big Bash League trophies and create history. Champions will depend on left arm pacer Hayden Kerr once again who has taken 24 wickets in 16 matches so far, amazingly, he has taken wickets in every match this year except last challenger match.

Australian all-rounder would have been best batsmen this edition with most runs if he had played all the matches. But due to the international duties he is featured in just 7 matches. Marsh has scored 342 runs in 7 matches with an average of 68.40 and a strike rate of 147.41. His highest score is 100 runs not-out with 1 century and 2 fifties this year.

Sixers captain is truly leading by an example this year. Henriques has scored 433 runs in 14 innings with an average of 39.36 and a strike rate of 134.05. His highest score is 76 runs not-out with 2 fifties this year.

Australian pacer has taken 22 wickets in 15 matches so far with an average of 18.59 and an economy rate of 8.26. He has been tipped as best bowler for Scorchers on betting platforms.

Sean Abbott has taken 19 wickets in just 12 innings for Sixers this year with an average of just 18.47 and an economy rate of 8.32.