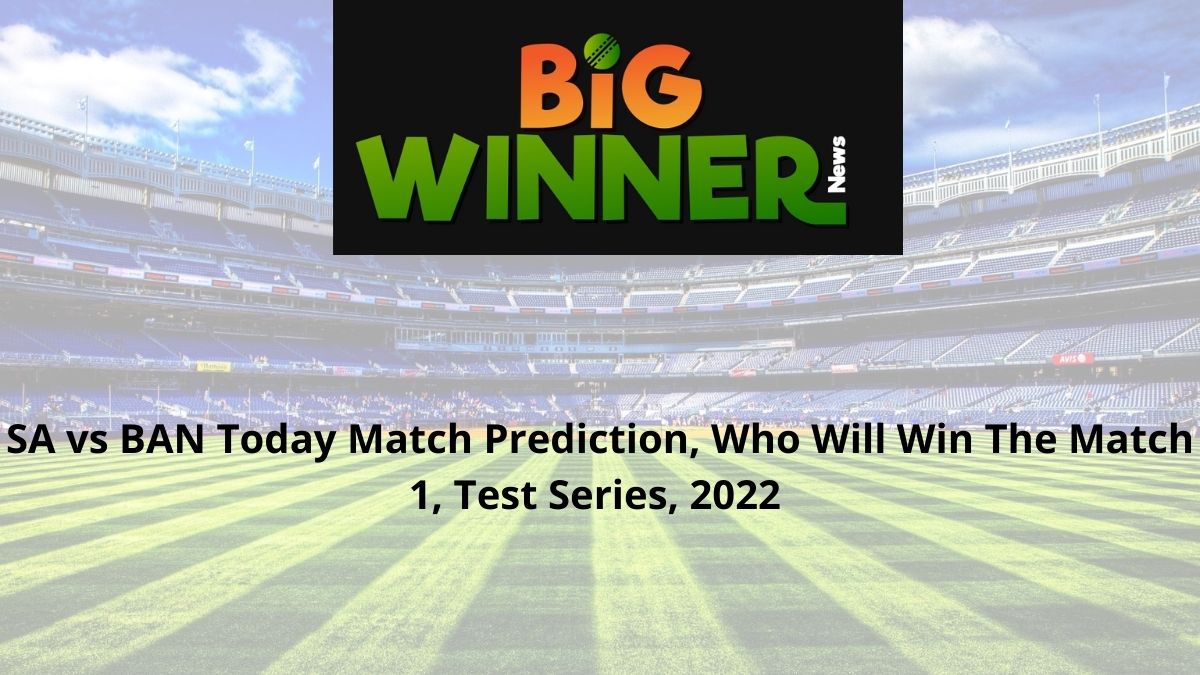 Our Experts bring you the finest today’s match prediction that you can trust. We are here for SA vs BAN Today Match Prediction, Match 1, Test Series, Online Cricket Betting Tips, which will provide every user with a clear picture of which team and in what aspect they can place their bets.

South African side suffered a shock defeat at home against Bangladesh in the ODI series and their situation is worsened before this 2-match test series. Six key players are missing the squad due to their commitments to Indian Premier League.

Star pace bowlers Kagiso Rabada, Lungi Ngidi, Anrich Nortje, and Marco Jansen have already landed in India to join their respective teams. In batting department Aiden Markram and David Miller are absentees. South Africa have never lost a test match against Bangladesh but have won only once in their last 9 test matches on this pitch.

Bangladesh team rank 9th in ICC Test rankings but are playing some excellent cricket recently. They made a history after winning a test match in New Zealand in their last test series and won first-ever ODI series in South Africa last week. They will be looking for another miracle with a first-ever test win in South Africa as they will be aware of key players missing this series from the opponent’s team.

The temperature is expected to hover around 26°C on the match-day with 73% humidity and 8 km/h wind speed. There are 7% chances of precipitation during the game.

Kingsmead pitch is excellent for the pace bowlers in the past and pitch has a good amount of grass available. Average score on this pitch is below 300 runs in all of four innings.

The young South African wicket-keeper batsman is in good form recently and will be a key player for the host in this entire series. He scored an unbeaten century in his last test inning and scored a fifty in the 2nd match of ODI series against Bangladesh. Verreynne has scored 248 runs in 6 test matches with an average of 31.00 and a strike rate of 51.99.

The middle-order wicket-keeper batsman is in form of his life in every format of the game and is one of the players for visiting team. He finished recently won one-day series as a second-highest run-scorer and has been the best test batsman for Bangladesh in last three series. Litton Das has scored 1649 runs in 29 matches with an average of 34.35 and a strike rate of 58.28.

The star South African spinner will be leading an inexperienced bowling unit on the pitch which has favored pacers in the past. Keshav Maharaj took 3 wickets in his last test inning against South Africa. He has taken 134 wickets in 40 test matches with an average of 32.88 and an economy rate of 3.18.

The 26-year-old right-arm pacer is in excellent form recently and won man of the series award in the recently won ODI series against South Africa. His test career is still in making but his current form makes him best bowler for the visiting side. Taskin Ahmed has taken 23 wickets in 10 test matches with an average of 56.73 and an economy rate of 3.79.