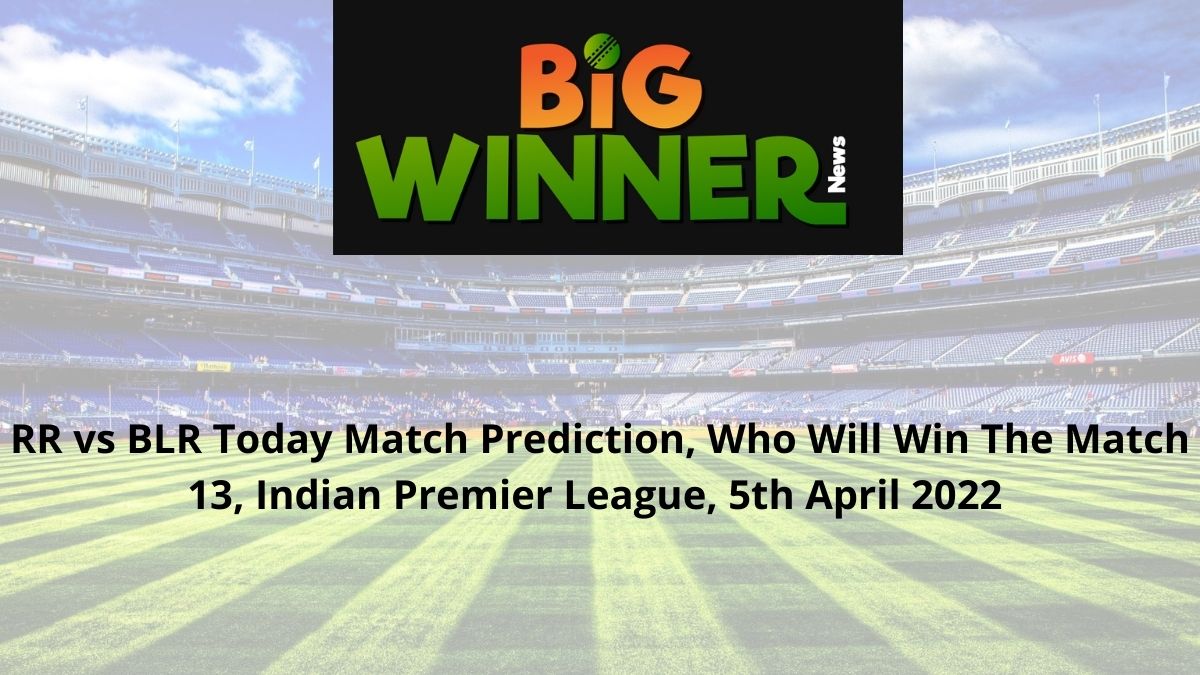 Our Experts bring you the finest today’s match prediction that you can trust. We are here for RR vs BLR, Today Match Prediction, Match 13, Indian Premier League, Online Cricket Betting Tips, which will provide every user with a clear picture of which team and in what aspect they can place their bets.

Rajasthan Royals won their second consecutive match this season with a big win over giants Mumbai Indians. They scored a big total of 193 runs while batting first with star opener Jos Buttler scoring first century of this season. They bowlers managed to restrict MI to 170 runs to register 23 runs win.

RR have already settled for their preferred starting eleven despite having every player available. Navdeep Saini made his debut in the last match and took 2 wickets and is likely to start once again against MI.

Royal Challengers Bangalore lost their first match by a narrow margin against Punjab Kings but won their last match against Kolkata Knight Riders. They bowled out KKR to just 128 runs with star spinner Wanindu Hasaranga taking 4 wickets. Batsmen struggled to chase down this low-total as they won by just 3 wickets and just 4 balls remaining.

Australian pacers Josh Hazlewood and Jason Behrendorff have joined the RCB camp and are available for the selection on Tuesday. Another Aussie star Glenn Maxwell is still unavailable for this match but is expected to play the next one.

The temperature is expected to hover around 30°C on the match-day with 80% humidity and 10 km/h wind speed. There is 0% chance of precipitation during the game.

Wankhede pitch is perfectly balanced for both batsmen and bowlers in any t20 game. Average score on this pitch is around 160 runs so any total of 180 plus runs is perfectly defendable. Dew is playing a big factor this season as teams batting second have won every match.

Royal Challengers Bangalore will face a biggest challenge in the form of Rajasthan Royals, who are leading league table this season. But their win against Kolkata Knight Riders and return of star pacers Josh Hazlewood and Jason Behrendorff makes them favorites to win against RR. BLR have won 4 of their last 5 matches against Rajasthan Royals but now face a totally different team for the first time this season.

The experienced English opener scored first century of IPL 2022 in the last match against Mumbai Indians. This was his second hundred in this tournament and now he is tipped as best batter for Rajasthan Royals ahead of the likes of Sanju Samson. Buttler scored 254 runs in just 7 IPL matches with an average of 36.28 and a strike rate of 153.01 last year.

New Royal Challengers Bangalore skipper continued his CSK form with 88 runs knock against Punjab Kings in the first match. Faf du Plessis is leading by an example in the absence of Glenn Maxwell and is tipped as best batter for RCB on Tuesday. He scored 633 runs in 16 IPL matches with an average of 45.21 and a strike rate of 138.20 last year.

The Indian ace spinner will be facing his former team for the first time this season and that will be a treat for his fans. Chahal took 18 wickets for RCB last season but was released and there was no attempt of re-signing him in the mega auction. Chahal has already taken 5 wickets in first 2 IPL matches this season with an average of 9.60 and an economy rate of 6.00.

Star Indian pacer was re-signed by Royal Challengers Bangalore in the mega auction for big bucks and he is proving his worth. He took 2 wickets against KKR, including Andre Russell’s, and gave away just 11 runs in his 4 overs. Harshal Patel took 32 wickets in 15 matches with an average of 14.34 and an economy rate of 8.14 last year.