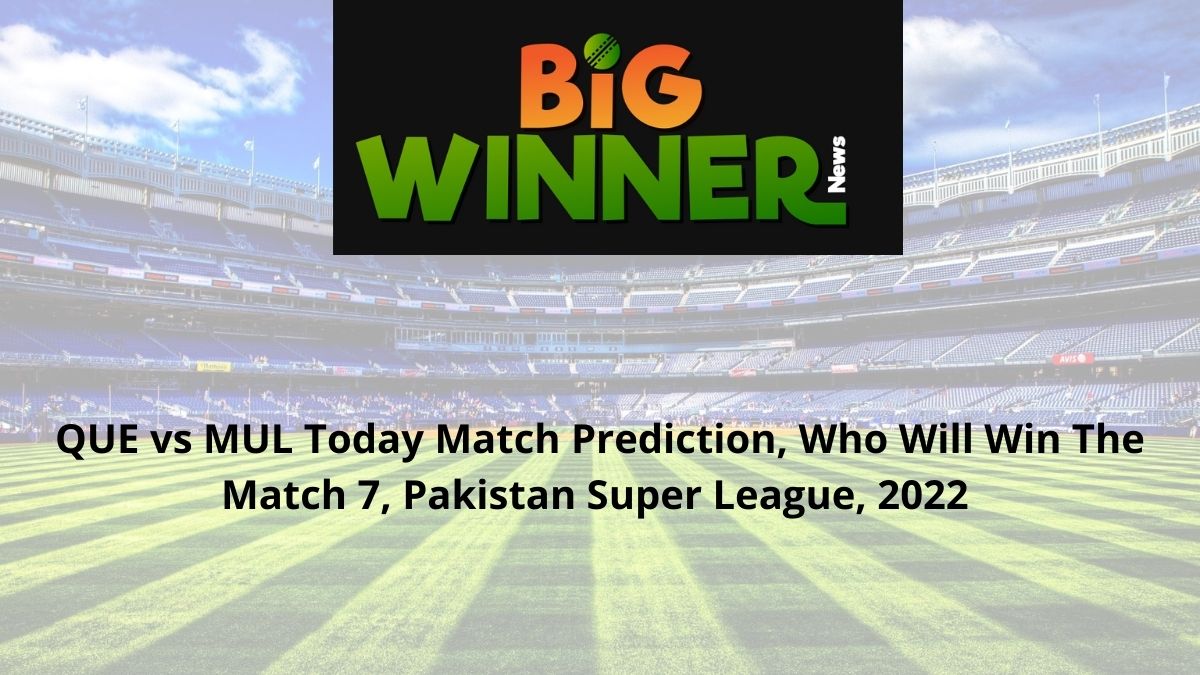 Our Experts bring you the finest today’s match prediction that you can trust. We are here for QUE vs MUL, Today Match Prediction, Match 1, Pakistan Super League, Online Cricket Betting Tips, which will provide every user with a clear picture of which team and in what aspect they can place their bets.

Quetta Gladiators finished last season in 6th position with just 2 wins in 10 matches. But they have started this year on a positive note. Gladiators lost against Zalmi in the first match by 5 wickets but just 2 wickets remaining but won against giants Karachi Kings by 8 wickets in their last match.

Multan Sultan won Pakistan Super League 2021 and has started this edition with two wins in two matches so far. In the season opener, they beat Karachi Kings by 7 wickets and in their last match, they won against Lahore Qalandars by 5 wickets.

The temperature is expected to hover around 31°C on the match-day with 23% humidity and 3 km/h wind speed. There are 11% chances of precipitation during the game.

Karachi Pitch has been supportive for both batsmen and bowlers this year and most of the matches on this pitch are above average score which is around 165-170 runs.

Multan Sultans expected to win the match against Quetta Gladiators

Multan Sultans are expected win against Gladiators by big margin considering the recent form of both teams. Sultans won against Qalandars by 5 wickets while chasing 207 target. Openers Mohammad Rizwan and Shan Masood scored big fifties against Lahore, which was 2nd consecutive fifty by the captain.

Quetta Gladiators have no chance against the in-form Multan side but they show fighting intent in their last two matches and will be looking to build up their momentum with a surprising win against Sultanas on Monday.

The young English opening batsman had a fantastic debut in PSL with 97 runs knock against Zalmi and also scored impressive 30 runs against Karachi Kings two days ago. Smeed has emerged as a surprise package for the Gladiators and will prove a game changer for them this year.

Sultans captain Mohammad Rizwan scored another fifty against Lahore in their last match after score 52 runs not-out against Kings in the first match. Rizwan has scored 5 fifties in his last 6 matches in this league.

The 18-year-old Pakistani pacer has been sensational this year with 6 wickets in matches with an average of 6.50 and an economy rate of 5.44. He also took 5 wickets against Karachi Kings in the last match.

Veteran Pakistan-born South African spinner has taken 4 wickets in 2matches so far, with an average of 11.00 and an economy rate of 6.00. He has been tipped as best bowler for the Sultan on betting platforms.