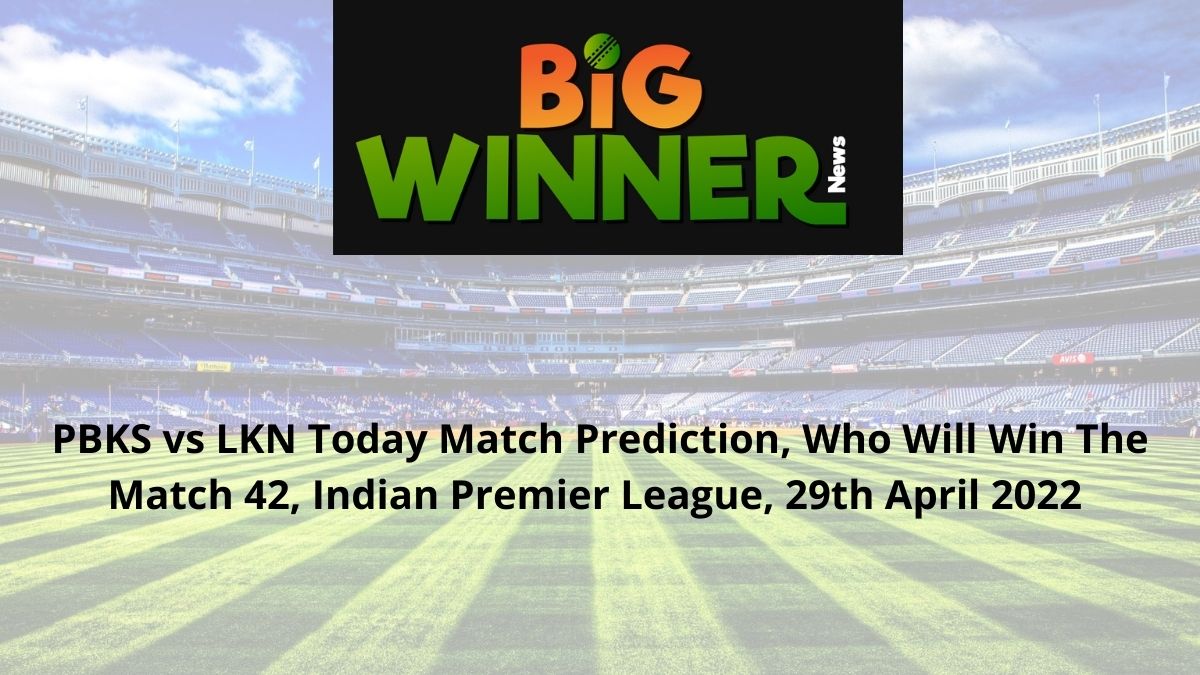 Our Experts bring you the finest today’s match prediction that you can trust. We are here for PBKS vs LKN, Today Match Prediction, Match 42, Indian Premier League, Online Cricket Betting Tips, which will provide every user with a clear picture of which team and in what aspect they can place their bets.

Punjab Kings are now place din 6th position in the league table with 8 points from the opening 8 matches. They need to upgrade their performance for the top-four race but now face former captain KL Rahul on Friday.

With this win, they reached in the top-four position in the league table with 10 points from the opening 8 matches, with 5 wins and 3 defeats. In-form pacer Avesh Khan missed the last fixture due to a minor injury but is expected to return for this clash.

The temperature is expected to hover around 35°C on the match-day with 50% humidity and 4 km/h wind speed. There is 1% chance of precipitation during the game.

MCA is more balanced and favored to ballers compared to other IPL pitches in Mumbai. Bowlers received a good help in the last few overs in the last match played here. Average scored on this pitch remains around 150 runs but we can expect high-scoring clash on Friday night.

Both teams won their last respective match with a dominating display and against the odds. Punjab Kings former captain KL Rahul, who has scored 2 centuries this season, will be facing his former team for the first time. Lucknow Super Giants are placed in 4th position in the league table, just 2 points above 6th placed Punjab Kings. So it will be a mouth-watering clash on Friday for the top-four race. KL Rahul’s red-hot form makes Lucknow Super Giants clear favorites to win this clash against Punjab Kings.

The veteran Indian batsman missed his first century of this season by just 12 runs in the last match as he scored unbeaten 88 runs against champions Chennai Super Kings. That was his 200th IPL match and he also became only a second player to cross 6000 runs in this league. Dhawan is leading most-runs chart for the Kings with 302 runs in 8 matches with an average of 43.14 and a strike rate of 132.45.

The star Indian wicket-keeper batsman and team’s captain scored his second century of this season in the last match. KL Rahul started this season slowly but is now a most in-form Indian batsman in this league. He ranks 2nd in Orange Cap race with 368 runs in 8 matches with an average of 61.33 and a strike rate of 147.79.

South African seamer is in good form for the Kings but is yet to perform up to his reputation this season. Rabada was the best bowler in the last match 2 wickets while conceding just 23 runs against Chennai Super Kings. He has taken 9 wickets in 7 matches with an average of 22.44 and an economy rate of 8.08.

Indians youngster missed the last match due to a minor injury but is set return for this mega clash on Friday. Avesh Khan finished last season as highest wickets-taker for the Capitals and once again leading most-wickets chart for his team. He has taken 11 wickets in 7 matches with an average of 20.09 and an economy rate of 8.28.