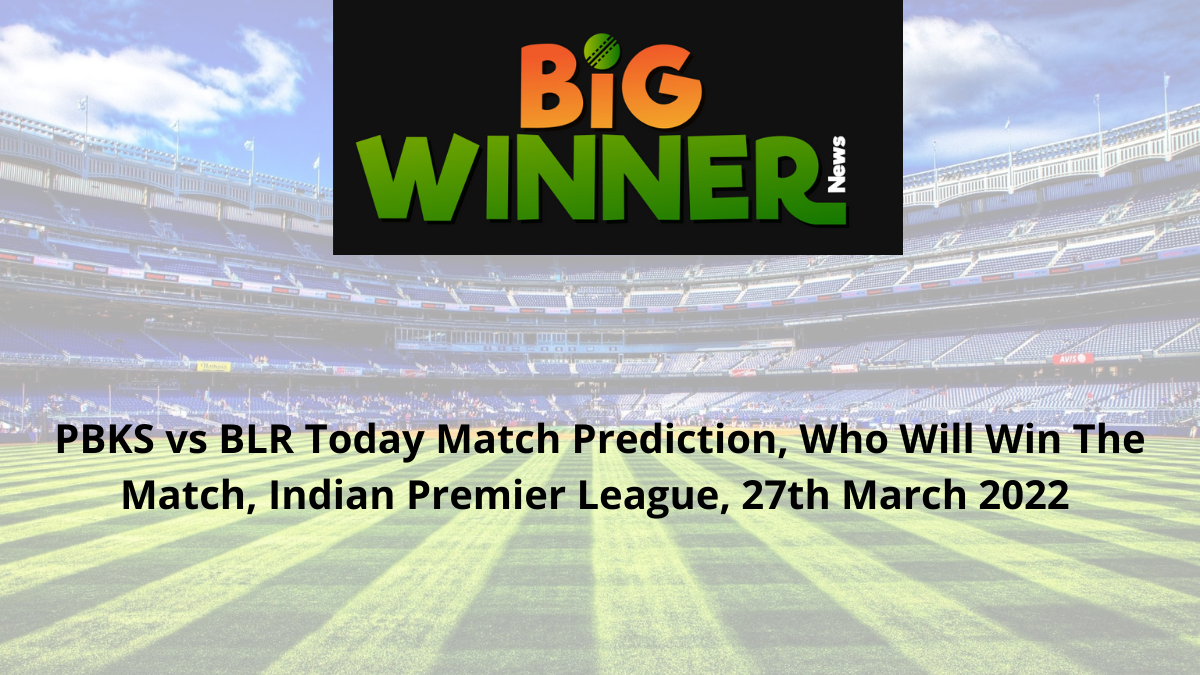 Our Experts bring you the finest today’s match prediction that you can trust. We are here for PBKS vs BLR, Today Match Prediction, Match 3, Indian Premier League, Online Cricket Betting Tips, which will provide every user with a clear picture of which team and in what aspect they can place their bets.

Punjab Kings struggled last year with just 6 wins in 14 matches despite some heroics from former captain KL Rahul. Mayank Agarwal will be leading PBKS for the first time and will open the inning with experienced star Shikhar Dhawan.

They also signed big-name placers Kagiso Rabada and Jonny Bairstow in the mega auction but depth in quality is still missing. Rabada and Bairstow are set to miss the first match as being park of their respective national team recently.

Royal Challengers Bangalore had a very good season last year where they reached the eliminators after finishing 3rd in group stage table. Biggest change this year will be Virat Kohli playing as a player only, with Faf du Plessis replacing him as captain. AB de Villiers hanged his boots and Devdutt Padikkal has joined Rajasthan Royals.

Yuzvendra Chahal and Washington Sundar also left Bangalore side and a lack of quality spinner will be a big issue for RCB this year. All-rounder star Glenn Maxwell will miss first match as he is yet to join the squad due to recently married. Australian pacers Josh Hazlewood and Jason Behrendorff will miss first few fixtures due to ongoing Pakistan tour.

The temperature is expected to hover around 30°C on the match-day with 83% humidity and 8 km/h wind speed. There is 12% chance of precipitation during the game.

Unlike other Mumbai pitches, DY Patil is a little help to the bowlers from start to end. It is hard to predict it’s current nature as other sports have also concluded at this venue. The average score on this pitch remains around just 140 runs and teams have never crossed 200 runs mark here.

Royal Challengers Bangalore once again reached the qualifiers last season but failed to lift the IPL trophy. They finished the season in 3rd position and will be looking to continue their excellent form this year as well. Punjab Kings had a poor season last year, where they finished in 6th position. With the likes of KL Rahul and Mohammed Shami gone, they are second favorites to win against RCB on Sunday evening. Last season, both teams won once against each other but Punjab boasts a better head-to-head record against Bangalore side.

The veteran Indian opener was excellent for the Delhi Capitals last season with almost 600 runs. He finished the tournament as the third highest run-scorer and now is tipped as the best batsman for his new team Punjab Kings. Dhawan scored 587 runs in 16 matches with an average of 39.13 and a strike rate of 124.63 last year.

The star Indian batsman and former captain struggled for the runs last year but still managed to cross 400 runs mark. Kohli is in good form with consistent runs on international duties, despite not scoring a century for a while. He scored 405 runs in 15 matches with an average of 28.92 and a strike rate of 119.46.

The 22-year-old leg-spinner was economical for Mumbai Indians last season but not to his best. Chahar was picked up Punjab Kings in the mega auction after no interest from his previous side. Chahar took 13 wickets in 11 matches with an average of 24.46 and an economy rate of 7.46 last season.

The ‘Purple Patel’ broke the IPL record for most wickets with another brilliant season. He was not retained by RCB but was re-signed for an INR 10.75 Crore, which will surely prove less than his worth. Patel took whooping 32 wickets in 15 matches with an average of 14.34 and an economy rate of 8.14 last year.