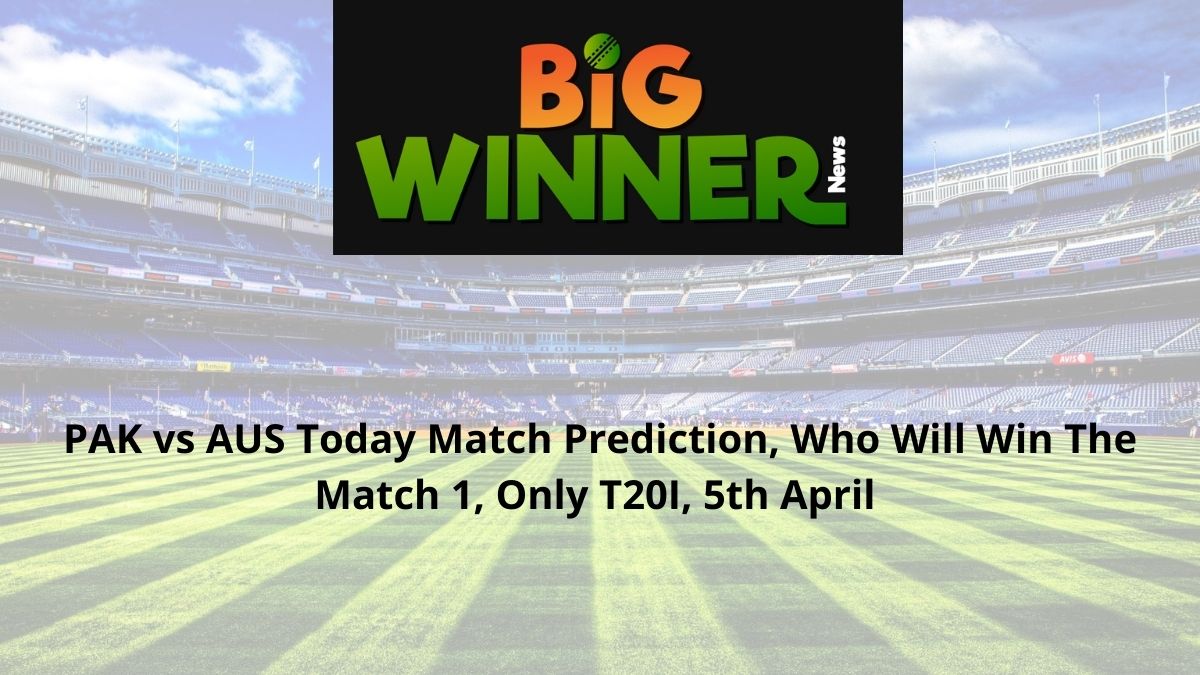 Our Experts bring you the finest today’s match prediction that you can trust. We are here for PAK vs AUS Today Match Prediction, Match 1, Only T20I, Online Cricket Betting Tips, which will provide every user with a clear picture of which team and in what aspect they can place their bets.

Pakistan side is in very good form in the shortest format of cricket and are clear favorites to win this only T20I match against Australia. They won both of their last T20I series by 3-0 against Bangladesh and West Indies after reaching the semi-finals round of the T20 World Cup last year.

Asian giants lost against Australia in the semi-finals by 5 wickets and just 6 balls remaining, their only defeat in their last 12 T20I matches. Pakistan will be looking for sweet revenge on Tuesday as the next T20 World Cup is scheduled this year in Australia.

Pakistanis team welcomes back their star all-rounder and vice-captain Shadab Khan for this fixture, who missed the ODI series due to a minor leg injury.

Australian side ranks 6th in ICC T20 teams chart, despite winning World Cup and last T20I series. They beat Sri Lanka at home by 3-1 in 5-matches T20I series after winning their first-ever T20 World Cup last year. They won the test series against Pakistan but lost the ODI series by 2-1 recently.

Kangaroos are already missing their key players due to different reasons and now two more players are in doubt for this only T20I match. Josh Inglis and Ashton Agar recently tested positive for Covid-19 and there is no update on their availability for this clash.

The temperature is expected to hover around 33°C on the match day with 29% humidity and 1 km/h wind speed. There is 1% chance of precipitation during the game.

Gaddafi stadium pitch is excellent for the fast bowlers but the Australian side struggled to take advantage of that in the last three ODI matches played here. Batsmen have scored big runs on this pitch recently and we can expect another high-scoring clash on Tuesday.

Pakistan is expected to win the only T20I match against Australia

Pakistan made a great comeback in the recent ODI series by winning the last two matches, after a shock defeat in the opening fixture. The Australian side is missing their key players in this historic tournament and that cost them the ODI series and now are second favorites to win this only T20 match on Tuesday. Both teams are in great form in the T20 format, with Pakistan winning 11 of their last 12 matches and Australia winning 10 of their last 12.

Both teams faced each other in the semi-finals round of the T20I World Cup last year, where Australia came victorious. Pakistan has a better head-to-head stats record against Australia in the T20I format but has won only once in the last five meetings.

Babar Azam continues to break batting records in every format after winning the player of the series award in the recently won ODI series. He has scored 3 centuries and 3 fifties in his last 6 overall matches and this red hot-form makes him one of the best current batsmen in the world. Babar Azam has scored 2620 runs in 73 T20I matches with an average of 45.17 and a strike rate of 129.12.

Australian skipper is struggling for form in the recent games but is still one of the best batsmen in T20 format. He scored 0 runs in his last 2 matches in the recently lost ODI series against Pakistan. Finch has scored 2696 runs in 88 T20I matches with an average of 34.43 and a strike rate of 145.42.

The sensational pacer enters this fixture with great form and will be a key for Pakistan to win this only T20I game against Australia. Afridi finished the recently concluded PSL 2022 as the highest wicket-taker and also took 6 wickets in the last 2 ODI matches against Australia. Afridi has taken 45 wickets in 39 T20I matches with an average of 24.9 and an economy rate of 7.82.

Adam Zampa made his return to the national team in the recently lost ODI series against Pakistan and was the best bowler for Australia. Zampa has excellent numbers in the T20 format and his current form makes him the best bowler on online betting platforms. Zampa has taken 70 wickets in 61 T20I matches with an average of 21.1 and an economy rate of just 6.78.