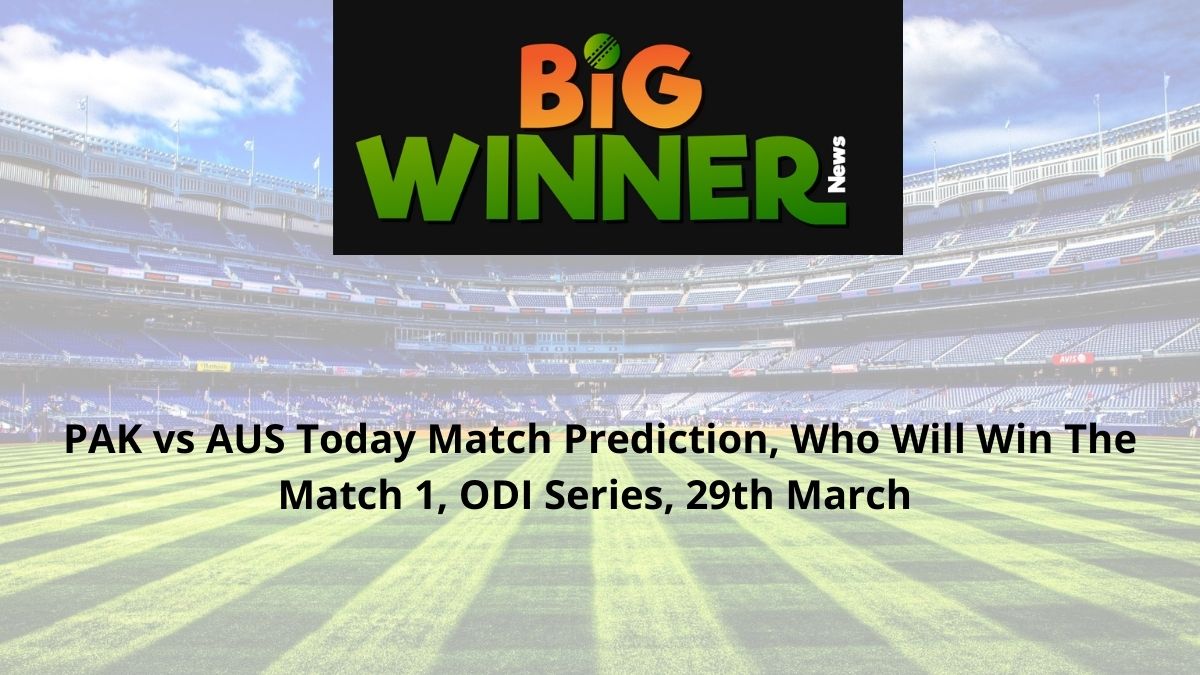 Our Experts bring you the finest today’s match prediction that you can trust. We are here for PAK vs AUS Today Match Prediction, Match 1, ODI Series, Online Cricket Betting Tips, which will provide every user with a clear picture of which team and in what aspect they can place their bets.

Pakistan side are playing ODI matches after nine months as their last series against New Zealand was cancelled due to security concerns. They lost their last ODI series against England by 3-0 and rank 6th is ICC ODI best teams chart with just 93 points.

Team vice-captain Shadab Khan suffered a minor groin injury and is set to miss first two matches. This is a big blow for Pakistan team as Shadab Khan was in excellent form in PSL 2022 with both bat and ball. Mohammad Nawaz is also out of this series due to a foot injury and Zahid Mahmmod is drafted in as his replacement.

Australian are playing their first ODI match of this year and played only three matches last year. Their last ODI series came in Jul 2021, where they beat West Indies away by 2-1. They have won all of their last three ODI series and rank 3rd in ICC ODI teams chart, just 5 points behind leaders New Zealand.

The temperature is expected to hover around 23°C on the match-day with 76% humidity and 1 km/h wind speed. There is 0% chance of precipitation during the game.

Gaddafi stadium pitch is excellent for the fast bowlers and that will definitely hurt Australian side who are without their star pace trio Pat Cummins, Mitchell Starc, and Josh Hazlewood. Batsmen can rely on middle overs to score big runs but we can’t expect a score of 280 plus runs while batting first.

Australian side have rested their key players after the three-matches test series. But other players also ruled out after picking different injuries in last few days. Pakistan team are with their full strength and that makes them clear favorites to win this match and series later. Australia have much better head-to-head records against Pakistan and have won 5 out of last 5 meetings against them.

Pakistani captain ranks 1st in ICC ODI best batsmen chart with a huge lead of 62 points to 2nd placed Virat Kohli. He scored two fifties and a century in the test series against Australia after scoring handful runs in PSL 2022. He scored 158 runs in his last ODI match and will be looking to pick up where is left off. Babar Azam has scored 3985 runs in 83 matches with an average of 56.9 and a strike rate of 89.6.

Australian skipper needs to lead by example with key players David Warner and Steven Smith missing this series. Finch was rested for the last series against West Indies and it’s been almost one and half year, since he played ODI matches. Finch is highest ranked ODI player for Australia with 5232 runs in 132 matches with an average of 41.9 and a strike rate of 88.4.

The star Pakistani pacer is once again leading bowling unit and will be a key for his side to win this series. He took 9 wickets in recently lost test series and was highest wickets-taker in PSL 2022. Afridi has taken 53 wickets in just 28 ODI matches with an average of 24.6 and an economy rate of 5.51.

The 29-year-old Australian spinner is returning to national team setup after a long break and will be most experienced bowler for the visitors. Zampa was part Australia’s last ODI series where he took 5 wickets in 3 matches against West Indies. Zampa has taken 97 wickets in 64 ODI matches with an average of 32.1 and an economy rate of 5.52.